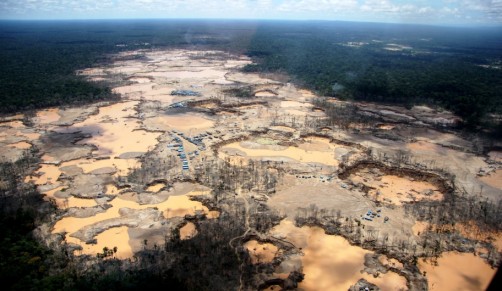 The after affects of deforestation in the Amazon.

The official announcement of the launch of CINCIA was made on Earth Day, April 22, during a celebration event hosted by the U.S. Ambassador to Peru, Brian A. Nichols, at UTEC in Lima, Peru.

CINCIA will serve as an international hub for Peruvian and foreign scientists and affiliates to collaborate on critical priorities in Madre de Dios – restoration and reforestation, the reduction of human health threats from environmental mercury, detection of deforestation threats, and sustainability.

The goal of CINCIA is to build scientific capacity needed in the local communities to face the growing environmental threats to the people and the region’s rainforests. Through collaborative research, innovative education programs and apprenticeships, ACERS aims to inspire and groom future local scientists while also engaging with the local community to create needed change and sustainability to turn the tide of destruction in the rainforest province.

CINCIA will operate in partnership with the region’s primary research institutions – the Peruvian Amazon Research Institute (IIAP) and the National Amazonian University of Madre de Dios (UNAMAD), the sole national university in the region. IIAP is a governmental research entity under the Peruvian Ministry of the Environment with a 35-year history of scientific investigation in the Amazon.

The vision for this project was inspired by the work of Sarah DuPont, founder of the Amazon Aid Foundation and her work to build awareness of the Amazon through her film River of Gold. ACERS will be led by the efforts of Wake Forest conservation biologist and CEES director Miles Silman, who will serve as the associate director for science; longtime colleague and a leading expert on mercury in the Amazon Luis Fernandez, who will serve as executive director; and Michelle Klosterman, director of academic development and assessment in the Office of Global Affairs at Wake Forest who will serve as associate director for outreach and communication.

Fernandez, a tropical ecologist who is one of the world’s leading experts on the MDD region, has led similar research efforts in the Amazon Basin in previous positions at Stanford University, the Carnegie Institution for Science, and the United States Environmental Protection Agency (US EPA).

“There are critical issues facing Madre de Dios which is one of the most important areas of Amazonian biodiversity on the planet and is home to the last vestiges of indigenous tribes that still live unconnected to modern society,” Fernandez said.

• MDD is a region in the Peruvian Amazon the size of South Carolina and covered by the most biodiverse and pristine tropical rainforests in the Amazon Basin.• 172,000-plus acres of virgin tropical forests have been clear-cut over the last 10 years by illegal gold mining and logging creating vast, barren wastelands, some of which is located in national protected areas.• 40 tons of toxic mercury every year are released into rivers and lakes by mining, contaminating air, water, soils, wildlife and people, including several recently contacted indigenous communities.• Three of every four people in MDD have mercury levels above maximum health limits recommended by the World Health Organization indicating a looming public health crisis.• Environmental and health risks in MDD continue to rise as the rate of deforestation and contamination grows unchecked.

“CINCIA is about making sure that the local people and institutions in one of earth's last best places have the scientific, technical and entrepreneurial capacity to make sustainable decisions on issues from development to public health to governance,” said Silman, who has conducted research in the region for more than 20 years, focusing on understanding biodiversity and the response of forest ecosystems to climate and land use changes over time.

“We’re faced with big challenges, but ACERS will help us apply the knowledge we’ve gained over the last 20 years and use it to address one of the major environmental issues of our time,” he said.

Klosterman is tasked with working with the research apprenticeship program to strengthen career pipelines for science, conservation and restoration, as well as enhancing the two-way flow of information between the scientific community and the general public, especially women and indigenous populations.

“We need to be able to communicate the science and the conservation efforts and their broad impacts to many different audiences, especially to the local population most affected as well as the officials in position to effect change through policy,” she said.

The establishment of CINCIA will bring together vast academic knowledge and resources gathered over the last decades to solve very real and very immediate environmental and social problems and to do it in a way that builds enduring institutional and human infrastructure.

“For me, personally, I feel like we've been given a great opportunity and we have a chance to bring our expertise to bear, to help a country-sized region of the Amazon develop sustainably,” said Silman. “Wake Forest houses a lot of expertise that is working to make the world a better place. If ever there was a project we’ve been involved with that embodies the University’s guiding principal of Pro Humanitate, this is it.”