Controlling the Properties of Matter in Two-Dimensional Crystals 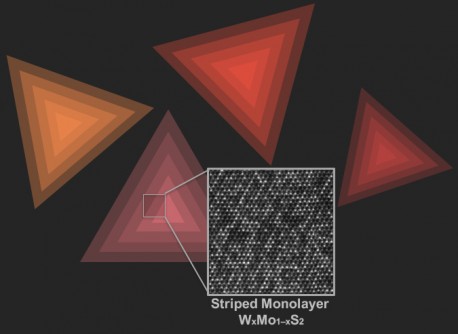 An electron microscopy image of ordered atoms of tungsten (W) and molybdenum (Mo) against artistic representations of triangular single layer flakes of WxMo1–xS2 on a substrate.

Whether an alloy has a random arrangement of atoms or one that is ordered can have large effects on a material’s properties. In a new paper published online in the journal Nano Letters, Nasim Alem, assistant professor of materials science and engineering, and colleagues at Penn State used a combination of simulations and scanning transmission electron microscopy imaging to determine the atomic structure of an ordered alloy of molybdenum, tungsten and sulfur. They determined that fluctuations in the amount of available sulfur were responsible for the creation of atomic chains of either molybdenum or tungsten. “We discovered how chains form in a two-dimensional alloy as a result of fluctuations in the amount of a particular precursor, in this case sulfur,” Alem said. “Normally, when we combine atoms of different elements, we don’t know how to control where the atoms will go. But we have found a mechanism to give order to the atoms, which in turn introduces control of the properties, not only heat transport, as is the case in this work, but also electronic, chemical or magnetic properties in other alloy cases. If you know the mechanism, you can apply it to arrange the atoms in a wide range of alloys in 2D crystals across the Periodic Table.” In the case of the molybdenum, tungsten and sulfur alloy, they showed that the electronic properties were the same in every direction, but using simulations they predict that the thermal transport properties are smaller perpendicular to the chains or stripes. “We didn’t know why this crystal forms an ordered structure, so we worked with my colleague Dr. Vin Crespi to understand the underlying physics that causes order in this crystal. Our calculations show it was the fluctuations in the third element, sulfur, that was determining how the chains formed,” Alem said.

Vincent H. Crespi, Distinguished Professor of Physics, and professor of chemistry and materials science and engineering who developed the theoretical understanding of the phenomenon, said, "Although the interior of the flake is indifferent to whether molybdenum or tungsten occupies any site in the crystal lattice, the edge of the growing crystal does care: Depending on how much sulfur is available at a given location, the edge will prefer to be either 100% molybdenum or 100% tungsten. So as the availability of sulfur randomly varies during growth, the system alternately lays down rows of molybdenum or tungsten. We think this may be a general mechanism to create stripe-like structures in 2D materials."

Amin Aziz, who is a Ph.D. candidate in Alem’s group and lead author on the Nano Letters paper, produced the STEM imaging and spectroscopy that showed the fine atomic structure of the alloy samples and their electronic properties.

“When we are able to directly image constitutive atoms of a substance, see how they interact with each other at the atomic level and try to understand the origins of such behaviors, we could potentially create new materials with unusual properties that have never existed,” said Azizi. A team led by Mauricio Terrones, professor of physics, produced samples of this ordered alloy by vaporizing powders of all three elements, called precursors, under high heat. Along with Azizi, Terrones, Alem and Crespi, other coauthors on the paper titled “Spontaneous formation of atomically thin stripes in transition metal dichalcogenide monolayers,” include Yuanxi Wang, a Ph.D. candidate in Crespi’s group, Ke Wang, a staff scientist in the Materials Research Institute who helped with the electron microscopy, Ph.D. candidate Zhong Lin in materials science and Ana Laura Elias, research associate in the Terrones group. Research support was provided by the National Science Foundation and the U.S. Army Research Office. Corresponding author Nasim Alem may be contacted at nua10@psu.edu.