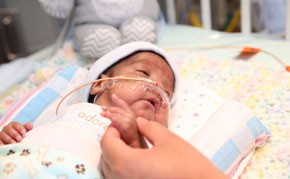 Newswise — Findings published in the Journal of Pediatrics describe growth factors in cord blood that may identify premature infants at risk for bronchopulmonary dysplasia-associated pulmonary hypertension (BPD-PH) – an often fatal lung disease in which the vessels carrying blood from the heart to the lungs become narrowed and dysfunctional. Identifying these babies at birth would allow earlier interventions to prevent the disease that manifests in some preemies two to three months after birth.

“We have many promising interventions and it would be exciting to start them at birth in babies at risk, before they become extremely sick,” said lead author Karen Mestan, MD, a neonatologist at Ann & Robert H. Lurie Children’s Hospital of Chicago and Associate Professor at Northwestern University Feinberg School of Medicine. “Currently we do not use cord blood for prediction of disease, but our study shows that it has tremendous potential to save lives.”

Using a large repository of cord blood and placental tissues from a wide gestational age range, Mestan and colleagues examined 15 biomarkers in cord blood, looking for correlations with lesions in the placenta that cause insufficient blood flow between the mother and fetus. They found that two growth factors – granulocyte colony-stimulating factor (G-CSF) and placental growth factor (PlGF) – were decreased with these placental lesions. They also found that these two growth factors were almost undetectable in extremely premature babies who later developed BPD-PH, as opposed to others who escaped the disease. The team validated these findings in a large sample of babies born at less than 28 weeks of gestation.

“Our findings also have implications for what we do during pregnancy,” said Mestan. “The growth factors we identified potentially could be measured in the mom’s blood, and if they are low, that would signal lesions in the placenta that place the baby at risk for severe lung disease. Better understanding about fetal origins of disease, which is still a mystery, would help us find new ways to improve outcomes even before the child is born.”

While the findings do not establish that deficiency in the two growth factors causes BPD-PH, they suggest a possible mechanism behind the disease. “There are many undifferentiated stem cells in cord blood and these growth factors might help mobilize them to get assigned to specific immune functions involved in the healing process,” said Mestan. “Preemies who are deficient in G-CSF and PlGF might not be able to fight off the development of lung damage. But what if we could replenish these babies with healthier stem cells or even replenish the growth factors? We could then regenerate lung tissue. This is a thrilling area of research that could have huge impact.”

Larger, multicenter studies are needed to validate findings before the growth factors can be used clinically to identify premature infants at risk for BPD-PH in order to initiate earlier interventions.

The current study was supported in part by grants from the National Heart, Lung, and Blood Institute.