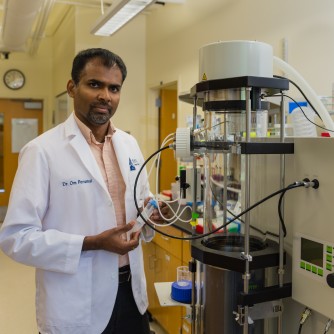 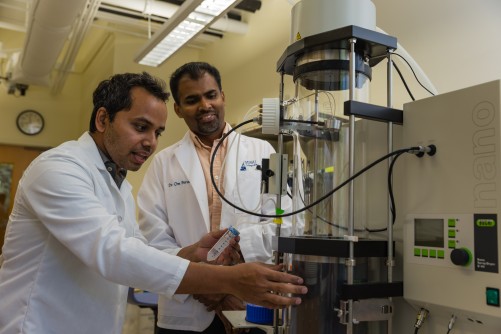 Newswise — Developing medications for children can be challenging—taste and texture are important, but safety is also a major concern, according to pharmaceutical sciences professor Om Perumal at South Dakota State University. As co-founder and chief scientific officer of Tranzderm Solutions, he is adapting his corn protein-based drug delivery method to oral pediatric formulations. “Our core technology is the same, but we’ve refined it and are finding new ways to utilize it,” said Perumal. His patented drug delivery system uses zein, a protein found in dried distillers grain, a co-product of ethanol production, to encapsulate the medication. The nanoparticles are approximately 500 times smaller than the diameter of a human hair.

To apply to oral pediatric formulations, Perumal explained, “We’ve modified the nanoparticles by coating them with milk proteins.” explained Perumal. “Our idea is to use products kids like.”

Before 1998, about 70 percent of the drugs used for children had not undergone clinical testing for the newborn to 17-year-old population, according to the National Institutes of Health Medline Plus.

“Drugs behave differently in children than adults,” Perumal explained. However, the pharmaceutical industry did not have much incentive to do the testing because the pediatric medications make up only 10 percent of the pharmaceutical market.

To encourage the development of drugs customized for children, the federal government in 2002 passed the Best Pharmaceutical for Children’s Act. It grants incentives to drug companies conducting Food and Drug Administration-requested pediatric studies.

“We are developing formulas customized for children that are safe and can be flexible based on the age of the patient,” Perumal explained. Their initial work targets infants and toddlers, who need either an oral suspension or a chewable form. “Dissolving a drug that is not water soluble can result in a thick, uninviting suspension,” he explained. In addition,” using an excipient, such as high amounts of alcohol, to dissolve the drug is out of the question for young children.”

The zein nanoparticles, which are not water soluble, protect the drug and the milk protein coating makes them more water dispersible. “We have the best of both worlds,” Perumal noted. In addition, the milk powder masks the drug’s taste.

“We can put the nanoparticles into a liquid, a chewable tablet or a capsule,” he said. “We could even use them as food sprinkles.”

The patent-pending drug delivery method can be optimized using different milk proteins, such as casein, lactoferrin and lactoglobulin. To mimic how the delivery system works, Perumal is testing the formulations using simulated gastric and intestinal fluid.

“We don’t want it to release in the food matrix,” he explained. The medication should be absorbed, typically within 24 hours, in the intestinal tract. Milk has thus far worked best, but experiments are underway to test the formulation in yogurt and other food matrices. His first target medications are antiretrovirals, which children who are HIV-positive must take for a lifetime. Using a rat model, Perumal and his team found that his formulation has two to four times higher absorption than what’s currently on the market. Another target medication is a drug under investigation to treat neuroblastoma, a cancer which affects infants and children up to 10 years old. Though neuroblastoma accounts for 6 percent of cancer in children, Perumal said no pediatric drug formulation is available for the investigational compound.

In addition, what works for children will be useful for patients who have swallowing difficulties, such as the elderly. However, Perumal cautioned, the delivery platform is in the early stages of development. Pharmaceuticals take anywhere from 15 to 20 years to reach the market.