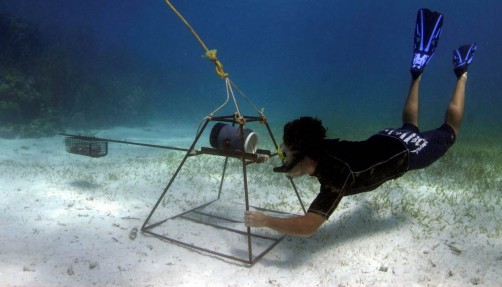 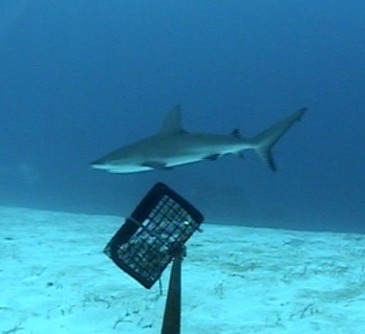 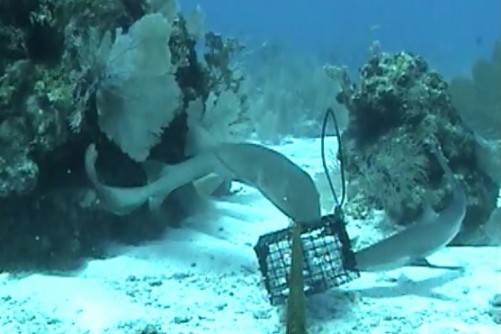 Filmed at Belize’s Glover's Reef Marine Reserve, which is a coral atoll, this footage shows a juvenile nurse shark (Ginglymostoma cirratum) (left) and Caribbean reef shark (Carcharhinus perezi) (right) competing for access to the bait cage of one of the baited remote underwater video (BRUV) cameras used in the study, nicknamed “chum cams.” 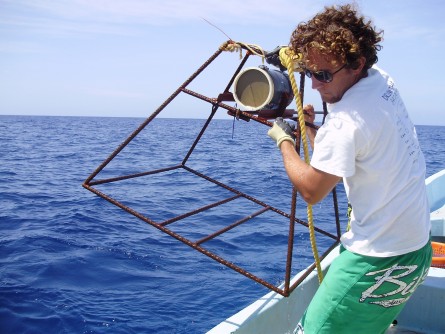 Lead author of the study, Mark Bond of the Institute for Ocean Conservation Science at Stony Brook University, retrieves one of the baited remote underwater video (BRUV) cameras, nicknamed “chum cams,” after the filming is complete at Turneffe Atoll, one of the fished sites.

Newswise — STONY BROOK, NY, March 8, 2012 – A team of scientists, led by the Institute for Ocean Conservation Science at Stony Brook University, used video cameras to count Caribbean reef sharks (Carcharhinus perezi) inside and outside marine reserves on the Mesoamerican Barrier Reef in the Caribbean Sea. Using survey data collected from 200 baited remote underwater video (BRUV) cameras, nicknamed “chum cams,” the scientists compared the relative abundance of these reef sharks in two marine reserves with those in two areas where fishing is allowed, and demonstrated that the sharks were more abundant in the reserves.

The research findings appear in the paper, “Reef sharks exhibit site-fidelity and higher relative abundance in marine reserves on the Mesoamerican Barrier Reef,” published online today in the journal PLoS ONE. The purpose of the study, conducted from 2005 through 2010, was to test the hypothesis that carcharhinid shark species, which include requiem and whaler sharks, are more abundant inside no-take marine reserves where fishing for sharks and their prey is prohibited. The authors tested the hypothesis by using BRUV surveys to determine the reef sharks’ numbers, and combined these results with acoustic monitoring to measure their site fidelity (remaining within the same local area) in Glover’s Reef Marine Reserve, Caye Caulker Marine Reserve, and two reefs where fishing is allowed, all located in Belize.

“Although we know that relatively sedentary reef fish and lobsters benefit from marine reserves, this study now presents visual proof that large, active sharks are also dramatically more abundant inside these protected areas, too,” said Mark Bond, lead author and doctoral student at Stony Brook University. “Nearly four times as many chum cam deployments in the marine reserves recorded reef sharks than on similar fished reefs. These areas provide the sharks and other coral reef species a respite from fishing, which means decreased fishing mortality for the sharks and more prey for them to eat.”

The video cameras were enclosed in protective housing, and placed on the sea floor with small bait-filled cages positioned in front of them. Sharks, attracted by the smell of the bait, swam to the cameras, which allowed the research team to record, count, and compare shark populations in the marine reserves to those in the areas where fishing is permitted, at no stress to the sharks. In addition to the BRUV surveys, the scientists fitted 34 reef sharks with acoustic transmitters, and tracked their movements, using moored underwater listening stations. They found that the sharks, both juveniles and adults, live year-round within the reserves. “Scientists who study tigers or jaguars in the wild use camera traps to count them,” said Dr. Demian Chapman, assistant professor in the School of Marine & Atmospheric Science at Stony Brook, leader of the research team and assistant director of science of the Institute for Ocean Conservation Science. “It is just as difficult to count sharks in the ocean, so we took a page from the big cat researchers’ playbook and deployed baited video cameras to count the sharks. It’s only fitting since these large apex predators are the ‘big cats’ of the sea, and like their feline counterparts, their continued existence on Earth is threatened."

Due to intense fishing, Caribbean reef sharks are listed as “Near Threatened” by the International Union for the Conservation of Nature (IUCN) but it is possible they will be upgraded to “Vulnerable” by IUCN as more data are collected. They live in the western Atlantic Ocean, ranging from Bermuda to southern Brazil, and are the only Atlantic requiem shark species that undergoes its entire life cycles within coral reef ecosystems.

“Caribbean reef sharks and other shark species around the world are threatened by overfishing,” said Dr. Ellen K. Pikitch, a professor in the Stony Brook University School of Marine and Atmospheric Sciences, who co-authored the paper and is executive director of the Institute for Ocean Conservation Science. “Our study demonstrates that marine reserves can help protect shark species that live on coral reefs. Moreover, the use of underwater video monitoring provides us with an excellent tool to determine if populations are recovering and thriving inside these reserves."

“As the saying goes, a picture is worth a thousand words,” said Bond. “As Caribbean nations and other countries consider developing marine reserves, chum cams can virtually transport policy makers and the public beneath the waves and show them the benefits of these protected areas.” This research was funded by the Roe Foundation, The Pew Charitable Trusts, and other sponsors of the Institute for Ocean Conservation Science.