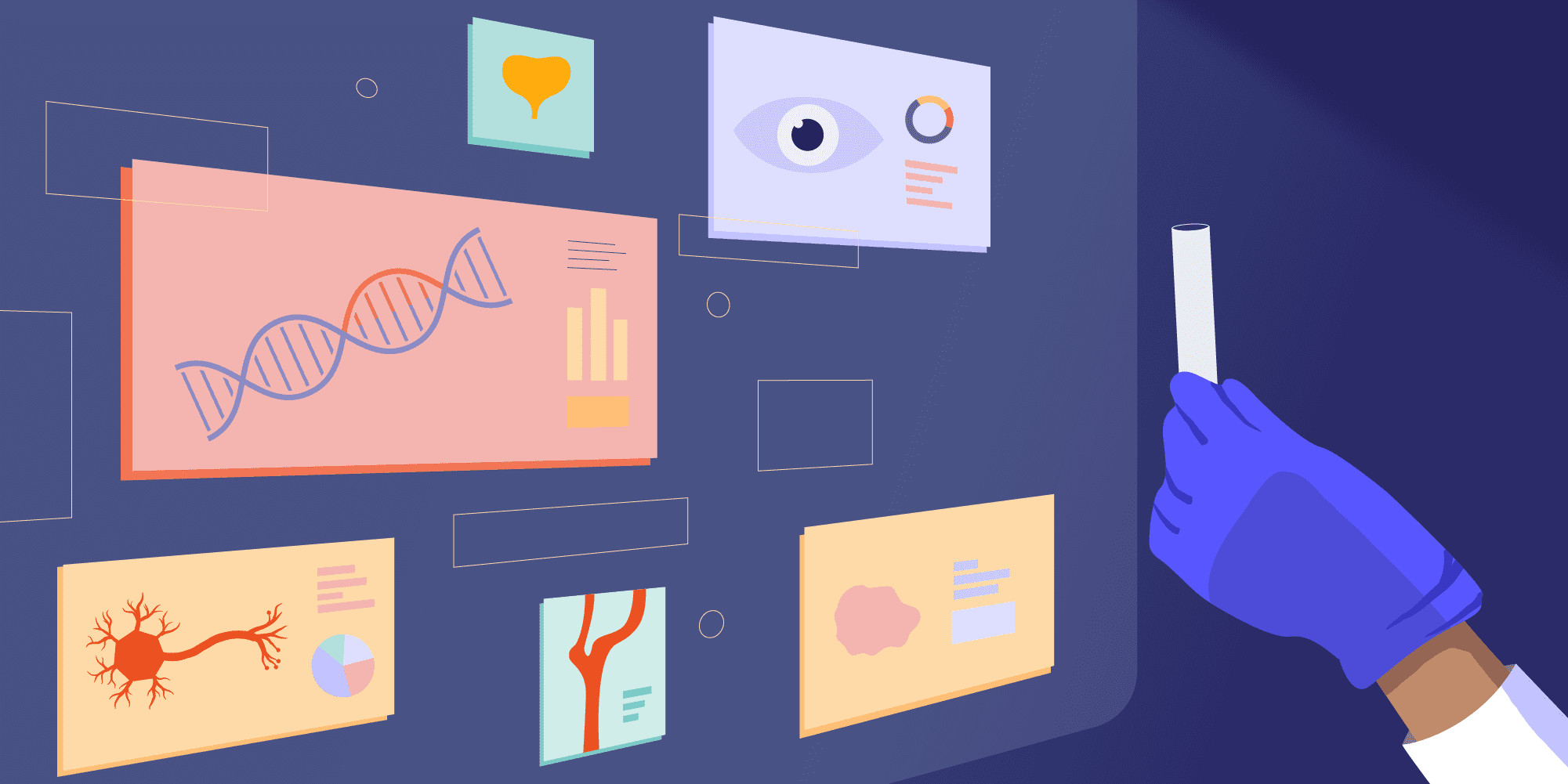 2020 was a big year for CRISPR — the discoveries of new Cas proteins, use of CRISPR technology to study and develop diagnostic tests of COVID-19, a Nobel Prize, and more. The past year has also brought results from clinical trials using CRISPR technology, which we first reported on in 2019, and the start of new clinical trials.

In this new review article, we will go over the basics of clinical trials and then map out the current CRISPR-based trials from disease background to what we really hope to learn from these trials.

In the United States, the Food and Drug Administration (FDA) evaluates new disease treatments for safety and efficacy through clinical trials on patient volunteers. Early trials look at safety and side effects. Later trials test efficacy and compare new therapies with standard treatments.

The current trials using CRISPR-based treatments are still in early stages. That means that even if the treatments are safe and effective, they’re likely still a few years away from FDA approval and being broadly available to patients.

Red blood cells use hemoglobin to carry oxygen from the lungs to all the tissues of the body. Mutation in a gene that encodes part of the hemoglobin molecule cause two different genetic disorders: sickle cell disease (SCD) and beta thalassemia.

In sickle cell disease (SCD), red blood cells are misshapen. Their crescent or “sickle” shape makes them block blood vessels, slowing or stopping blood flow. This causes sudden, severe pain. Complications include chronic pain, organ damage, strokes, and anemia. In beta thalassemia, patients do not make enough hemoglobin. This leads to anemia and fatigue. In more severe cases, patients have organ damage, especially to the liver, bones, and heart. Both diseases can be fatal.

There are some treatments available, but often, patients still suffer severe symptoms and complications from their diseases. Patients with more severe SCD and beta thalassemia need frequent blood transfusions. Bone marrow transplant can be curative; however, this can only be done when a healthy, matching donor can be found. This is not an option for most SCD or beta thalassemia patients.

The approach taken to treat blood disorders with CRISPR technology doesn’t directly fix the gene variants that cause disease, but uses a clever workaround: instead of directly fixing the disease-causing mutations, the goal is to increase levels of fetal hemoglobin. This is a form of hemoglobin that fetuses make in the womb, but children and adults don’t make. It is not entirely understood why humans switch from one form of hemoglobin to the other, but fetal hemoglobin can take the place of defective adult hemoglobin in red blood cells. This treatment can be used to treat both beta thalassemia and SCD.

This treatment approach is considered ex vivo genome editing, because the editing occurs outside of the patient’s body. Ex vivo editing guarantees that genome-editing tools only come in contact with the right target cells.

In the first use of an ex vivo CRISPR-based therapy to treat a genetic disease, researchers treated a patient with beta thalassemia in Germany in February 2019. 12 more patients have since been treated, and seven of them have been followed for at least three months. None of the patients needed blood transfusions in the months after treatment. The first patient with SCD was treated with the same therapy in Nashville, Tennessee in July 2019. This patient, Victoria Gray, has shown remarkable progress. Hear from Gray herself. Early results on other patients are promising, too:

CRISPR Therapeutics and Vertex Pharmaceuticals are jointly running the fetal hemoglobin trials, and recruiting patients in the US, Canada, and Europe.

A forthcoming trial from UCSF, UCLA, and UC Berkeley, including IGI researchers, is planning to test an alternate approach that would directly repair the mutation that causes SCD.

WHAT TO WATCH FOR

Right now, there is a burst of research into treating blood disorders. Pharmaceutical and biotech companies as well as academic research institutions are working on both pharmaceutical and genetic therapies. We don’t know yet which approaches will be the safest and most effective, but patients are sure to benefit from the increased research activity in these disease areas.

The initial results from Victoria Gray and other patient-volunteers are extremely encouraging. We look forward to more detailed results from other trial participants, who will hopefully show similar symptom reduction. Long-term follow-up of Gray and other patients is crucial: they will be tracked for years to come to see if the treatment remains effective, and to look for potential side effects, like negative health effects or cancer from unwanted or off-target edits, which won’t be apparent until further down the line.

“The main side effects so far have been from the chemotherapy necessary to wipe out the pre-existing bone marrow cells in order for the edited cells to engraft. The chemotherapy is a huge limiting factor for these therapies,” explains Megan Hochstrasser, Ph.D., a CRISPR expert who studied with Jennifer Doudna and now serves as the IGI Education Program Manager. “If you have to be in the hospital for weeks because you are getting your bone marrow ablated with chemotherapy, which cripples your immune system, it’s risky, expensive, and time-consuming. That’s a huge barrier to scaling this and making it available widely. It’s a big hurdle that could be overcome if someone finds a way to deliver the treatment directly, without bone marrow ablation.”

Scalability — getting the treatment to the many people who need it — will be a major challenge if the treatment move forward to FDA approval, both because of the technical challenges of creating the individualized product and administering the treatment protocol, and the cost. Research into in vivo approaches, which could eliminate the need for chemotherapy and decrease the associated risks and expenses, is in early stages, but will be a focus of those working to make more widely accessible CRISPR-based therapies for blood disorders in the coming years.

Cancer refers to a group of diseases that are caused by uncontrolled cell growth. Right now, CRISPR-based therapies are mainly aimed at treating blood cancers like leukemia and lymphoma. A trial in China for a type of lung cancer was recently completed, as well.

T cells, a type of white blood cell essential for immune system response, are covered in receptors that recognize other cells as safe or threatening. They patrol the body, killing foreign or dangerous cells, or recruiting other cells to assist. In CAR-T immunotherapy, researchers genetically engineer a patient’s T cells to have a receptor that recognizes the patient’s cancer cells, telling the T cells to attack.  The immune system is highly regulated to avoid attacking healthy cells. Some T cell receptors work as “checkpoints” that determine whether an immune response occurs. When a T cell PD-1 receptor comes in contact with a molecule called PD-L1 on another cell, it communicates that it is a “safe” cell and the T cell leaves it alone.

Cancer cells are often cloaked in these molecular safety signals, tricking the patrolling T cells into ignoring them. Researchers are using CRISPR to edit the PD-1 gene in T cells to stop them from making functional PD-1 receptors so they can’t be fooled by cancer cells. This immunotherapy approach is known as checkpoint inhibition, and it is often used in conjunction with CAR-T engineering to give T cells the greatest possible chance of eliminating cancer.

For these treatments, researchers harvest T cells from a patient’s blood and engineer them in a lab. Then, they put them back into the patient’s bloodstream by IV. Because this treatment relies on ex vivo editing, it is easy to deliver the genome-editing tools to the target cells. CAR-T therapy was approved for use in treating blood cancers in 2017.

In the Chinese study, researchers at the West China Hospital, Sichuan University treated 12 patients with non-small-cell lung cancer with PD-1 edited T cells. This approach did not include CAR-T, as it is not currently an option for lung cancers. The main goals of this study were to test whether the treatment was safe, had tolerable side effects, and whether it elicited a dangerous immune response.

In April 2020, results from this trial were published in Nature Medicine. The reported findings include:

The first CRISPR-based therapy trial in the US combined CAR-T and PD-1 immunotherapy approaches, using CRISPR to edit a total of three genes. This phase 1 study, run by the University of Pennsylvania in conjunction with the Parker Institute, began recruiting in 2018 and was completed in February 2020. Like the Chinese trial, the goals were to determine if the treatment was safe and had acceptable side-effects, not to cure patients. Two patient volunteers with advanced white blood cell cancer (myeloma) and one with metastatic bone cancer (sarcoma) were treated. The reported findings are:

Together, these studies indicate that CRISPR-engineered CAR-T therapy may be a promising line of treatment: it is safe, the side effects are tolerable, and the treatment does not induce a strong immune reaction.

Neither treatment provided a cure, but the aim of these studies was only to see if the treatment was safe and should be developed further for treatment, not to cure disease. As first attempts, both trials met their goals of showing safety and tolerability.

“A really interesting thing is that the American study did show a percentage of the large genomic rearrangements that people fear,” says Hochstrasser. “But the percentage of cells with these changes actually decreased over time. It seemed like the cells that had those types of mutations were dying or getting out-competed by the other cells. So, it seemed like the cells that you wouldn’t want in the body were not actually sticking around in the body, which was a surprise to me, and very encouraging.”

WHAT TO WATCH FOR

The FDA has already approved CAR-T therapies and PD-1 pathway inhibitors that don’t use genome editing. This is a reason for optimism: the proof-of-principle work for these therapies has already been done successfully.

According to Hochstrasser, “The efficiency of editing — meaning, the percentage of cells that actually got edits — wasn’t great in either trial. But these trials were approved years ago, and done using technology from 2016. There have been many advancements in the technology since then. So, it’s an important proof of concept around the immediate safety and tolerability of the treatment, and we’ll have to see if they can increase editing efficiency.”

Using now-available, more potent techniques, will editing efficiency be higher? And with higher editing efficiency, will genetic checkpoint inhibition work as well or better than checkpoint-blocking drugs? Will PD-1 editing be as or more effective than antibody treatments that disable PD-1? Future research will have to answer these questions.

For the full review of CRISPR clinical trials underway in 2021, covering eye disease, chronic infection, a rare protein-folding disease, and what to look for next from CRISPR-based therapeutics, please see the complete article from the Innovative Genomics Institute.