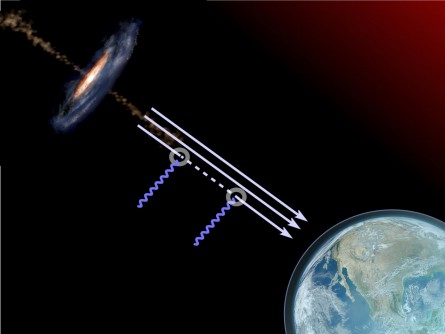 Credits to Aurore Simonnet, Sonoma State University (for the active galaxy core) and to NASA/NOAA/GSFC/Suomi NPP/VIIRS/Norman Kuring (for image of earth).

Illustration of how light is transformed into ALP by the galaxy.

Newswise — Researchers at Stockholm University are getting closer to corner light dark-matter particle models. Observations can rule out some axion-like particles in the quest for the content of dark matter. The article is now published in the Physical Review Letters.

Physicists are still struggling with the conundrum of identifying more than 80 percent of the matter in the Universe. One possibility is that it is made up by extremely light particles which weigh less than a billionth of the mass of the electron. These particles are often called axion-like particles (ALPs). Since ALPs are hard to find, the researchers have not yet been able to test different types of ALPs that could be a part of the dark matter.

For the first time the researchers used data from NASA's gamma-ray telescope on the Fermi satellite to study light from the central galaxy of the Perseus galaxy cluster in the hunt for ALPs. The researchers found no traces of ALPs and, for the first time, the observations were sensitive enough to exclude certain types of ALPs (ALPs can only constitute dark matter if they have certain characteristics).

One cannot detect ALPs directly but there is a small chance that they transform into ordinary light and vice versa when travelling through a magnetic field. A research team at Stockholm University used a very bright light source, the central galaxy of the Perseus galaxy cluster, to look for these transformations. The energetic light, so-called gamma radiation, from this galaxy could change its nature to ALPs while traveling through the magnetic field that fills the gas between the galaxies in the cluster.

"The ALPs we have been able to exclude could explain a certain amount of dark matter. What is particularly interesting is that with our analysis we are reaching a sensitivity that we thought could only be obtained with dedicated future experiments on Earth", says Manuel Meyer, post-doc at the Department of Physics, Stockholm University.

Searches for ALPs with the Fermi telescope will continue. More than 80 percent of the matter in the Universe remains to identify. The mysterious dark matter shows itself only through its gravity, it does neither absorb nor radiate any form of light.