Dark Tourism Has Grown Around Myth of Prison Tree 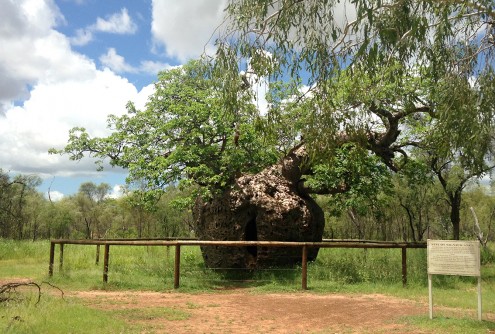 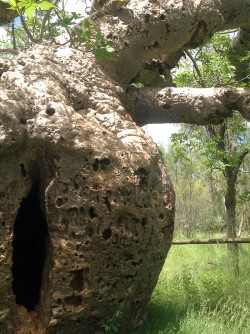 Close up of the so-called "prison tree", a boab tree near Derby, Western Australia. 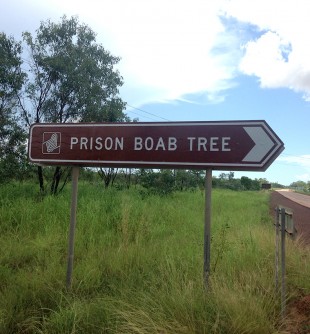 An official sign pointing to the so-called "prison tree".

Newswise — New research involving the University of Adelaide is helping to expose a myth about a significant Australian "prison tree", which researchers say has become a popular tourism attraction for the wrong reasons.

With a girth of 14.7 metres (48 ft), the distinctive boab has become a tourist attraction because of stories about its use as an overnight holding cell for Aboriginal prisoners in the colonial 1890s. The tree itself is officially signposted as a prison tree, and the site has been subject to a number of upgrades over the years as a local tourist attraction.

However, the authors of a chapter in the upcoming Palgrave Handbook of Prison Tourism argue there is no evidence the Derby boab was ever used as a prison tree. They say a combination of misinformation and "dark tourism" has been the driving force behind the growing mythology surrounding the tree.

Their views have been publicised in the March 2017 issue of the magazine National Geographic, ahead of the book's publication next month.

"Dark tourism involves visiting sites associated with death, destruction and crime, including 'dark dungeons', such as former prisons or courthouses," says Dr Elizabeth Grant, an architectural anthropologist and Senior Research Fellow at the University of Adelaide, who has co-authored the book chapter with the University of Tasmania's Dr Kristyn Harman.

"Pilgrimages to the so-called prison tree expose tourists to dark aspects of Australia's colonial past, which are often associated with atrocities against Indigenous people or colonial 'triumphs' at the frontier.

"It's true that because of their distinct shape and size, some boab trees were used by colonial police as places of incarceration. However, there is no strong evidence that the Derby prison tree was ever used in this way," Dr Grant says.

The authors say the first story about the Derby boab's use as a prison tree didn't emerge until the 1940s. There is some evidence this story may have been accidentally transferred to the Derby tree from a well-known boab prison tree at Wyndham, further north in remote Western Australia.

"A newspaper story in 1949 covering an exhibition of the artist Vlase Zanalis referred to his artwork of the Derby boab as being of a prison tree. Whether this was a mistake on the part of the journalist, the artist or the cataloguer of Zanalis's work at the time is unknown. What we do know is that the artist also painted the Wyndham prison tree, so it's entirely possible that the historical information about the Wyndham tree was used instead for the Derby boab," Dr Grant says.

"Since the 1940s, the myth of the Derby tree being a place of incarceration for Aboriginal people has coalesced into 'fact' through repetition as a series of articles, and as misinformation about the Derby boab has circulated."

The myth has not gone unchallenged over the years.

"In the 1960s a documentary series noted that local officials at Derby were well aware their tree was not a true prison tree, but they appreciated its tourist value nonetheless," Dr Grant says.

"Some trees are regarded as cherished individuals with unique personalities. We know that boabs have also been used by Aboriginal people to store dead bodies, and this is borne out by the discovery of many bones inside the Derby boab," she says.

Dr Grant says the dark tourism that surrounds the Derby tree has detracted from other potential tourism opportunities for the site.

"A government report noted that one of the major assets of Derby is its Aboriginal heritage and culture, although this aspect of the region is barely acknowledged or promoted. Presenting the natural beauty of the Derby boab tree and its actual history, as well as the desecration of the site by countless tourists based on a long-running myth, has the potential to be a tourist drawcard in itself," Dr Grant says.

The book chapter, Inventing a colonial dark history: the Derby Boab 'Prison' Tree, is included in The Palgrave Handbook of Prison Tourism, to be published in April 2017.

A Churchill Fellow and the recipient of the International Correctional and Prison Association Excellence in Research Award, Dr Grant has also researched historical precedents of prison environments for Indigenous people in detail for an upcoming book entitled: Aboriginal Prisons: The places of incarceration of Australian Aboriginal People. 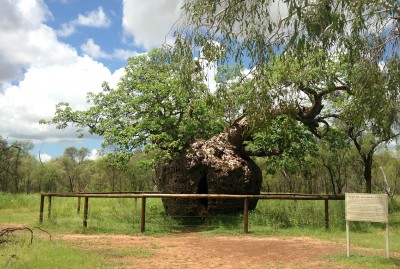 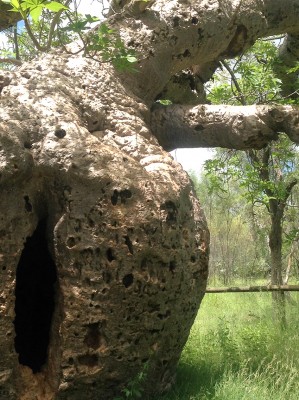 Caption: Close up of the so-called "prison tree", a boab tree near Derby, Western Australia. 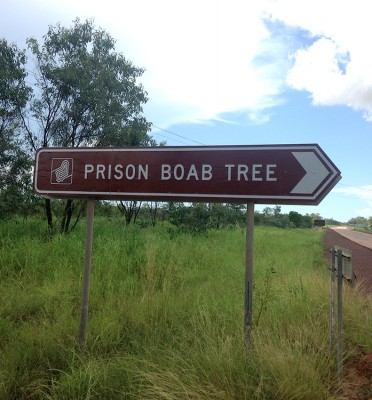 Caption: An official sign pointing to the so-called "prison tree".