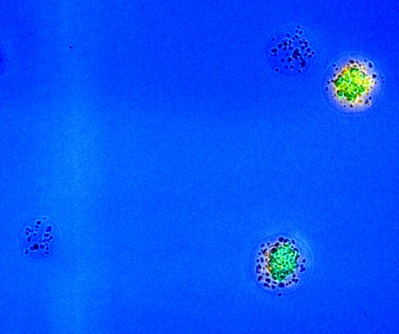 "Antibacterial enzymes, which kill via catalytic mechanisms, represent promising candidates in the fight against drug-resistant microbes," explained Griswold. "Staph infections in hospital settings are a serious problem that has gained widespread public attention, and there's an urgent need to address the threat of antibiotic resistance. Using molecular engineering, we are expanding the pool of antibacterial drug candidates and improving their performance."

In the studies on Staphylococcus aureus, Griswold's team showed that a bacteria's own molecular machinery for cell wall synthesis and remodeling can be turned against itself. Using genetic engineering, the enzymes can be modified such that, when applied from the outside, they attack and kill the bacteria from which they were originally cloned. The key is using bioinformatics to identify a bacteria's endogenous "autolysins," which are enzymes involved in physiological processes such as cell division, and then leveraging molecular engineering strategies to convert the autolysins into potent antibacterial agents.

Additionally, they examined strategies for generating performance-enhanced versions of lysozyme, a natural antibacterial protein that helps protect humans from microbial invaders. To shield themselves from lysozyme mediated killing, some pathogens have evolved proteins that specifically bind and inactivate human lysozyme. Griswold demonstrated that it is possible to redesign the enzyme to evade these pathogen-derived inhibitory proteins, which resulted in modified lysozymes that can lyse bacteria under conditions where natural human lysozyme is completely inactivated.

To-date, the antibiotics field has been dominated by development of antibacterial chemotherapies. The Griswold group is part of a growing community of researchers examining a fundamentally different strategy: antibacterial enzymes. The enzymes attack bacterial cell components that are highly conserved during microbial evolution and, as a result, these alternative therapeutic options may be less susceptible to development of new bacterial resistance phenotypes.

"In the case of turning bacteria's own autolysins against themselves, we speculate that bacterial resistance might be exceedingly rare, as the enzymes play important roles in natural bacterial processes," said Griswold.

Further challenges for Griswold's team include discovery of additional antibacterial enzyme candidates, more fine-tuning of the current enzymes so as to increase their potency, and redesign of the inhibitor-evading lysozymes to better elude a broader spectrum of pathogen-derived inhibitory proteins. Long term, they hope to partner with industry in pursuit of clinical translation for promising therapeutic candidates.