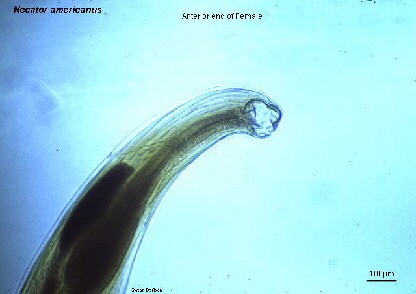 Researchers at Washington University School of Medicine in St. Louis have decoded the genome of the hookworm, Necator americanus, finding clues to how it infects and survives in humans and to aid in development of new therapies. An estimated 700 million people worldwide are infected with hookworms, which feed on blood, causing anemia and, in children, stunted growth and learning problems.

Newswise — Going barefoot in parts of Africa, Asia and South America contributes to hookworm infections, which afflict an estimated 700 million of the world’s poor. The parasitic worm lives in the soil and enters the body through the feet. By feeding on victims’ blood, the worms cause anemia and, in children, stunted growth and learning problems.

Now, researchers at Washington University School of Medicine in St. Louis have decoded the genome of the hookworm, Necator americanus, finding clues to how it infects and survives in humans and to aid in development of new therapies to combat hookworm disease.

The research is published Jan. 19 in Nature Genetics.

“We now have a more complete picture of just how this worm invades the body, begins feeding on the blood and successfully evades the host immune defenses,” said senior author Makedonka Mitreva, PhD, assistant professor of medicine and of genetics and a member of The Genome Institute at the School of Medicine. “This information will accelerate development of new diagnostic tools and vaccines against the infection.”

MitrevaNecator americanus causes about 85 percent of human hookworm infections, which are not usually fatal. However, in pregnant women, the worm can cause severe anemia, leading to maternal deaths and low birth weights that contribute to newborn deaths.

The deworming drug albendazole typically is given as part of mass treatment programs in areas with endemic infection, but its repeated and excessive use is leading to treatment failures and drug resistance in some regions, Mitreva said.

Hookworms are common in areas of extreme poverty that lack indoor plumbing. The worm’s eggs are excreted in the feces of infected individuals, contaminating the soil. After the eggs hatch, the immature worms, called larvae, molt twice and enter the body through the feet. The worms travel through the bloodstream to the lungs, where they are coughed up and then swallowed, making their way to the small intestine. It is there that the worms mature and begin feeding on the blood.

As part of the new research, the scientists took a multipronged approach to understand different aspects of how the hookworm invades the body, feeds on the blood and evades the host’s immune system.

Decoding the worm’s genome allowed the researchers to discover suites of genes that orchestrate each of these processes and to identify specific targets that may be vulnerable to vaccines or new drug treatments.

“We also prioritized those drug targets so that scientists can quickly follow up on the ones that appear to be most promising,” Mitreva said.

While causing significant illness in developing countries, hookworms are garnering attention in the United States and other industrial countries for their therapeutic potential in the treatment of autoimmune conditions, such as inflammatory bowel disease, multiple sclerosis, asthma and even allergies.

As part of their research, the scientists identified a group of molecules that appears to protect the worm from detection by the host immune system.

Hookworms evade notice by suppressing molecules that promote inflammation. This same approach may prove valuable in the treatment of autoimmune conditions.

“It is our hope that the new research can be used as a springboard not just to control hookworm infections but to identify anti-inflammatory molecules that have the potential to advance new therapies for autoimmune and allergic diseases,” Mitreva said.