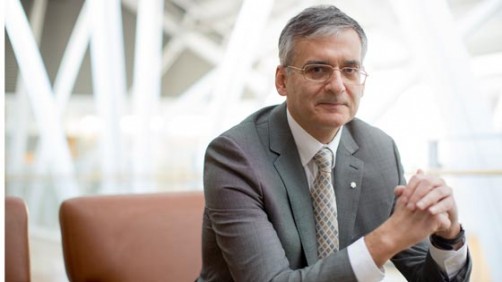 Credit: The Globe and Mail

Dr. Andres Lozano of Krembil Neuroscience Centre at Toronto Western says “we are encouraged by these findings.”

Newswise — TORONTO – An age group analysis of data from the ADvance trial has shown that participants over the age of 65 continue to derive the most benefit from Deep Brain Stimulation of the fornix (DBS-f), as observed in the data from the phase 2 findings (12 – 24 months) of the Phase II trial.

The findings, published today in the Journal of Alzheimer's Disease, by a team of researchers led by Dr. Andres Lozano at Toronto Western Hospital's (TW) Krembil Neuroscience Centre (KNC), are the potential beginnings of a patient profile for DBS-f treatment for Alzheimer's disease. The neurology and psychology aspects of the trial in Toronto were led by TW neurologist Dr. Peter Tang-wai and neuropsychologist Dr. Mary-Pat McAndrews respectively.

To further explore the benefits for this demographic, the research team is soon launching a Phase III, multi-centre international trial that will study the effects of DBS-f in 140 patients over age 65.

"We are encouraged by these findings as they continue to help us identify who will benefit most from DBS to treat Alzheimer's disease and learn more about this illness," says Dr. Andres Lozano, neurosurgeon and the principal investigator of the study. "With so few treatments available and the incidence of Alzheimer's only expected to increase, we really need to fully explore all treatments that seem to be of benefit to patients."

These latest results were captured from the second year of data of the ADvance trial whose first-year data was published in 2016. In that trial, forty-two patients with mild Alzheimer's disease were enrolled in a randomized, double-blind multicentre phase II clinical trial and implanted with DBS electrodes directed at the fornix – a bundle of nerve fibres in the brain that carry signals from the hippocampus – and followed for a total of two years.

In the first 12 months of the trial, to better measure the impact of electrical stimulation in the brain, patients were randomly assigned to either the "on" or "off" stimulation group after their procedure and monitored. Once this phase of follow up was complete, all patients then had their electrodes turned on, and were followed for another 12 months.

In the second 12-month phase, researchers noted similar observations they had seen in the first phase: that, although there were no differences overall in cognitive outcomes between study participants who had their device turned on right after surgery and those who had it turned on after 12 months, those 65 years of age and older appeared to experience a slower progression of Alzheimer's than those under that age, regardless of when their device was turned on.

"The next phase of our research will help determine whether this observed benefit is something we continue to see in this age group," says Lozano who is also University Professor and Chairman, Department of Neurosurgery, University of Toronto. "If it does, this could potentially give us a treatment for mild, late-onset Alzheimer's disease."

For more information about DBS research including inquiries about eligibility to participate in future research, please contact: [email protected]

This research was supported by funding from the National Institute on Aging, the Federal Economic Development Agency for Southern Ontario, and Functional Neuromodulation Ltd., the sponsor of the ADvance study.

About Krembil Neuroscience Centre
The Krembil Neuroscience Centre (KNC), located at Toronto Western Hospital, is home to one of the largest combined clinical and research neurological facilities in North America. Since opening in 2001, KNC has been recognized as a world leader through its research achievements, education and exemplary patient care. The centre focuses on the advancement, detection and treatment of neurological diseases and specializes in movement disorders, dementias, stroke, spinal cord injury, blinding eye diseases, epilepsy and cancer-related conditions.

Toronto Western Hospital has been serving the health care needs of its culturally diverse local community for more than 100 years. Home to the Krembil Neuroscience Centre, one of the largest combined clinical and research neurological facilities in North America, the Toronto Western Hospital is a leader in medical research and also offers expertise in community and population health and musculoskeletal health and arthritis. The Toronto Western Hospital, along with the Princess Margaret Cancer Centre, Toronto General Hospital, Toronto Rehabilitation Institute and Michener Institute for Education is a member of the University Health Network and is affiliated with the University of Toronto. www.uhn.ca​