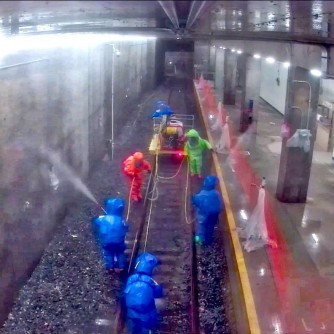 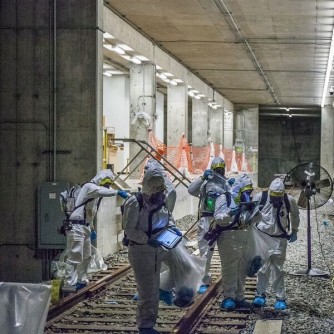 EPA teams collecting samples near entry of a mock subway system at Fort A.P. Hill military base in Virginia

Newswise — Only a week after the terrorist attacks of September 11, 2001, envelopes containing anthrax spores were sent to several media companies and two senators. As a result twenty-two people were infected and five died. Since these incidents, the U.S. has increased its efforts on measures countering bioterrorism. That incident stemmed from spores sent to individuals and offices where the reach was somewhat contained. Imagine if the spores had been taken onto a mass transit platform…like the subway. A subway incident can bring a whole city to a halt, and the effects can last much longer in the form of lingering fear and mistrust.

The Department of Homeland Security (DHS) Science and Technology Directorate (S&T) completed in September 2017, a four-year Underground Transport Restoration project in collaboration with the Environmental Protection Agency (EPA)’s Chemical, Biological, Radiological, and Nuclear (CBRN) Consequence Management Advisory Division (CMAD) and National Homeland Security Research Center (NHSRC). S&T and EPA conducted studies and performed exercises to see how disease-causing microbes spread through subway systems; how they can be sampled and cleaned; and how long it takes to be cleaned.

“The purpose of the project is to help develop the tools and techniques necessary for the rapid return of service to the subway system after it has been contaminated with a biological organism such as Bacillus anthracis (B. anthracis), while reducing the impact on humans and the environment,” said Shannon Serre, chemical engineer and manager of the project at EPA.

The initial work started in late 2011; lab experiments launched in 2013, and three field study events were completed between 2015 and 2016.

The first field event was at Sandia National Laboratories in California. In a subway car wrapped in plastic, EPA and S&T placed samples of various interior subway-car materials with spores of non-disease causing anthrax used for vaccination. “This strain mimics more closely the toxic strain used in the 2001 anthrax attacks, which is difficult to inactivate,” said Serre. “If we can kill B. anthracis, we can kill other pathogens such as the Ebola virus.”

Anthrax bacteria spores are dormant bacteria with a tough coating, which can keep them alive for several decades while enduring unfavorable environmental conditions. In contrast, viruses cannot survive long outside living organisms. “We have successfully applied the anthrax technology that we have developed to Ebola and other pathogens,” said Mike Nalipinski, associate director at EPA's CBRN CMAD.

In this field test it took the EPA more than 36 hours to kill anthrax spores in most materials in the subway car.

The second field test, led by MIT Lincoln Laboratory, occurred in May 2016. It focused on demonstrating and determining how aerosolized bacterial spores could contaminate a subway system. The researchers released sugar molecules (maltodextrin), similar in size to anthrax bacteria, and nontoxic gas (perfluorocarbon) into the fully operational New York City subway. EPA’s On Scene Coordinators from around the country provided operational support by collecting more than 8,000 samples from subway cars, platforms and tunnels during the weeklong event.

The results helped validate and improve previously developed dispersion models for predicting air flow during a biological incident. Such models can help response teams rapidly isolate contaminated sections of a subway to minimize spread and human impact. Results would also improve plans for placing biological agent sensors and will allow the EPA to develop better plans for response, decontamination and recovery from such incidents.

The third field test took place in a mock subway system at Fort A.P. Hill military base in Virginia. Since the facility is only three years old and lacks the typical dirt and grime present in real subways, scientists had to create a recipe for grime, which S&T research developed several years ago.

“We did not want to destroy their clean facility by putting grease and grime all over the place,” laughed Serre. “So we took one foot squares of concrete, ceramic tile, subway ballast and other material, similar to what you would find in a real subway system, and put grime on them. The reason we do this is because grime may impact the effectiveness of the chemicals that are used in the decontamination process.”

Examples of research from this field study include – spraying and fogging techniques with various disinfectants for surface treatment for porous and nonporous materials, and waste disposal considerations. The findings of this study identified specific tactics that would be useful for first responders and other national agencies if a subway system were contaminated and a response was required.

Although the anthrax spores that were used could not cause sickness, participants needed to mimic realistic conditions as much as possible. They wore full protective gear, including Hazmat suits and respirators to determine how long it takes to put them on and work comfortably in a biological hot zone and chemical vapors, and how long it takes to disinfect the suits and remove them. This timekeeping will help estimate the time necessary to restore a subway environment in full gear. “Obviously, it is a lot more difficult to go in when you have a Hazmat suit and respirator on, and do your sampling,” said Serre.

The results of these studies and exercises showed how long an actual treatment would take and will help with guidance procedures in the event of a biological incident in a subway system.

S&T and EPA are hoping to do another joint project, this time in an outdoor complex urban area like New York City.

“Airport-like security would inhibit the movement in a subway,” said Donald Bansleben, who is a program manager for response and recovery projects at S&T. “The subway is like the artery of the city - people going to work, kids going to school, tourists going sightseeing; it is so important to the local, regional and national economies. And yet, it is so easy for someone to walk in and do damage. We must be ready to take action to ensure the safety and resiliency of the nation.”