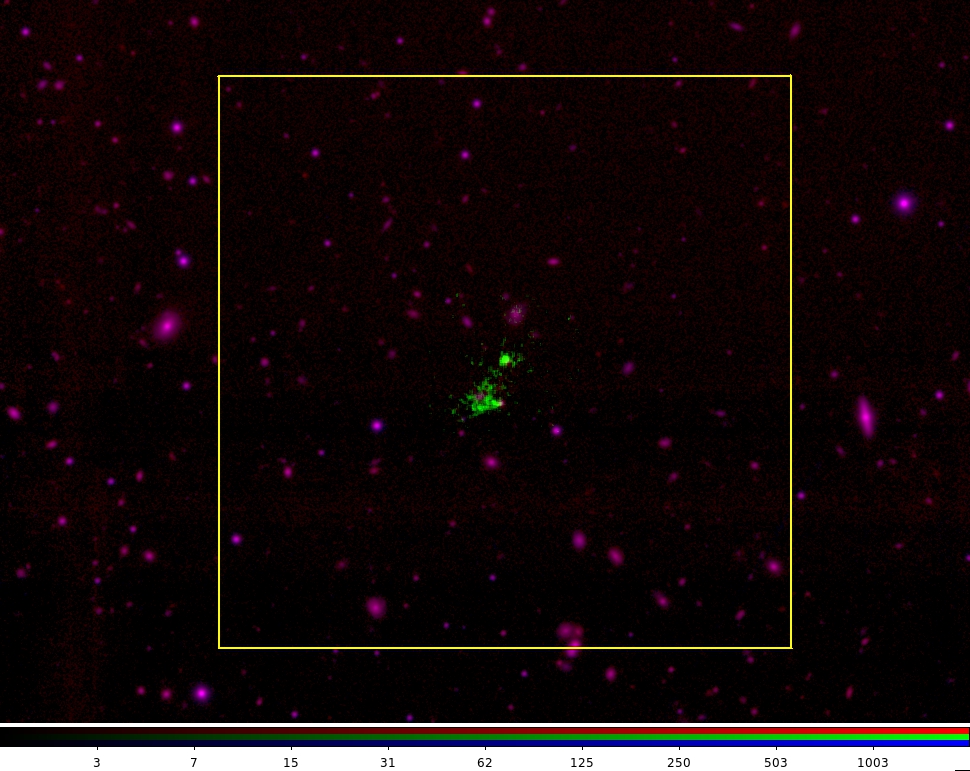 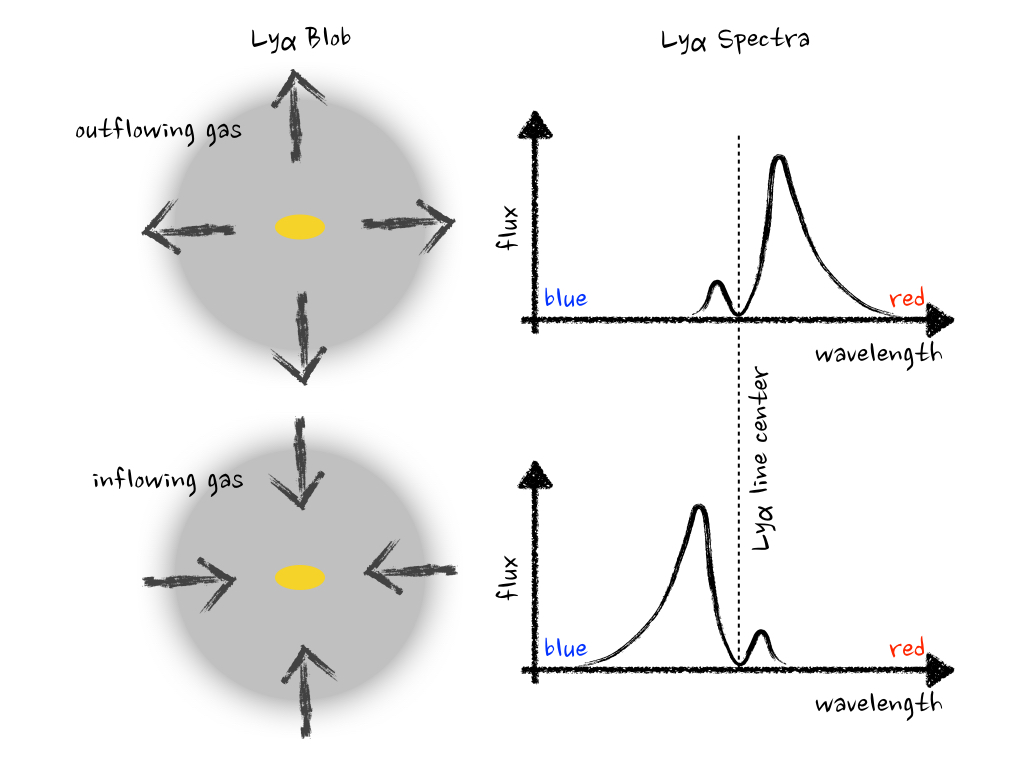 Newswise — Billions of lightyears away, gigantic clouds of hydrogen gas produce a special kind of radiation, a type of ultraviolet light known as Lyman-alpha emissions. The enormous clouds emitting the light are Lyman-alpha blobs (LABs). LABs are several times larger than our Milky Way galaxy, yet were only discovered 20 years ago. An extremely powerful energy source is necessary to produce this radiation—think the energy output equivalent of billions of our sun—but scientistsdebate what that energy source could be.

A new study that published on March 9 in Nature Astronomy provides evidence that the energy source is at the center of star-forming galaxies, around which the LABs exist.

The study focuses on Lyman-alpha blob 6 (LAB-6), whose light was emitted 10.7 billion years ago. The collaborative team discovered a unique feature of LAB-6—its hydrogen gas appeared to fall inwards on itself. LAB-6 is the first LAB with strong evidence of this so-called infalling gas signature. The infalling gas was low in abundance of metallic elements, suggesting that the LAB’s infalling hydrogen gas originated in the intergalactic medium, rather than from the star-forming galaxy itself.

“This gives us a mystery. We expect there should be infalling gas around star-forming galaxies—they need gas for materials,” said Zheng Zheng, associate professor of physics and astronomy at the University of Utah and co-author of the study. Zheng joined the effort of analyzing the data and led the theoretical interpretation with U graduate student Shiyu Nie. “But this seems to be the only Lyman-alpha blob with gas infalling. Why is this so rare?”

The authors used the Very Large Telescope (VLT) at the European Southern Observatory (ESO) and the Atacama Large Millimeter/Submillimeter Array (ALMA) to obtain the data. Lead author Yiping Ao of Purple Mountain Observatory, Chinese Academy of Sciences first observed the LAB-6 system over a decade ago. He knew there was something special about the system even then, based on the extreme size of its hydrogen gas blob. He jumped at the chance to look more closely.

“Luckily, we were able to obtain the data necessary to capture the molecular makeup from ALMA, pinning down the velocity of the galaxy,” he said. “The optical telescope VLT from ESO gave us the important spectral light profile of Lyman-alpha emission.”

The universe is filled with hydrogen. The hydrogen electron orbits the atom’s nucleus on different energy levels. When a neutral hydrogen atom gets blasted with energy, the electron can be boosted to a larger orbit with a higher energy level. Then the electron can jump from one orbit level to another, which produces a photon. When the electron moves to the inner-most orbit from the orbit directly adjacent, it emits a photon with a particular wavelength in the ultraviolet spectrum, called a Lyman-alpha emission. A powerful energy source is required to energize hydrogen enough to produce the Lyman-alpha emission.

The authors discovered the infalling gas feature by analyzing the kinematics of the Lyman-alpha emissions. After the Lyman-alpha photon is emitted, it encounters an environment filled with hydrogen atoms. It crashes into these atoms many times, like a ball moving in a pinball machine, before escaping the environment. This exit makes the emission extend outward over great distances.

All of this bouncing around not only changes the light wave’s direction, but also its frequency, as the motion of gas causes a Doppler effect.  When gas is outflowing, the Lyman-alpha emission shifts into the longer, redder wavelength. The opposite occurs when gas is inflowing—the Lyman-alpha emission’s wavelength appears to get shorter, shifting it into a bluer spectrum.

LABs are associated with gigantic galaxies that are forming stars at a rate of hundreds to thousands of solar mass per year. Giant halos of Lyman-alpha emissions surround these galaxies, forming the Lyman-alpha gas blobs hundreds of thousands of light years across with power equivalent of about 10 billion suns. The movement within the gas blobs can tell you something about the state of the galaxy.

Infalling gas can originate several different ways. It could be the second stage of a galactic fountain—if massive stars die, they explode and push gas outward, which later falls inwards. Another option is a cold stream—there are filaments of hydrogen floating between celestial objects that can be pulled into the center of potential well, creating the infalling gas feature.

The authors’ model suggests that the infalling gas in this LAB comes from the latter scenario. They analyzed the shape of the Lyman-alpha light profile, which indicates very little metallic dust. In astronomy, metals are anything heavier than helium. Stars produce the majority of the heavy elements in the universe—when they pulsate or explode, they spread metallic elements across interstellar space.

“If the gas had come from this galaxy, you should see more metals. But this one, there weren't a lot of metals,” said Zheng. “The indication is that the gas isn't contaminated with elements from this star formation.”

Additionally, their model indicates that the surrounding gas only produces the energy power equivalent of two solar masses per year, much too low for the amount for the observed Lyman-alpha emission.

The findings provide strong evidence that the star-forming galaxy is the major contributor of the Lyman-alpha emission, while the infalling gas acts to shape its spectral profile. However, it doesn’t completely answer the question.

“There may still be other possibilities,” said Ao. “If the galaxy has a super massive black hole in the center, it can emit energetic photons that could travel far enough to produce the emission.”

In future studies, the authors want to tease apart the complicated gas dynamics to figure out why infalling gas is rare for LABs. The inflowing gas could depend on the orientation of the system, for example. They also want to build more realistic models to understand the movements of the Lyman-alpha emission photons as they crash into atoms.