Does the Milky Way move like a spinning top?

The rotation of the Galaxy is not included in the video, only the precession with respect to it. 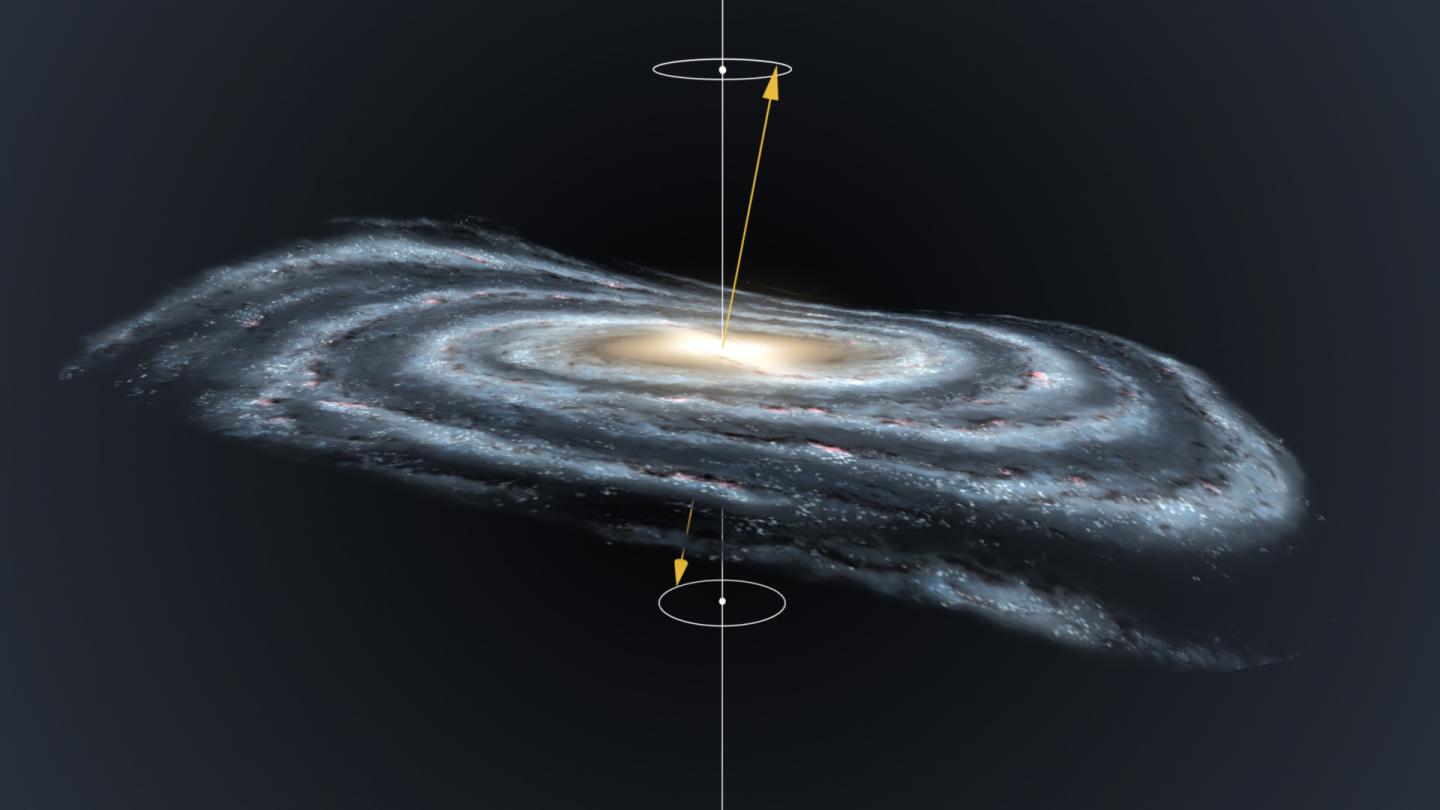 The rotation of the Galaxy is not included in the video, only the precession with respect to it.

Newswise — An investigation carried out by the astrophysicists of the Instituto de Astrofísica de Canarias (IAC) ?ofia Chrobáková, a doctoral student at the IAC and the University of La Laguna (ULL), and Martín López Corredoira, questions one of the most interesting findings about the dynamics of the Milky Way in recent years: the precession, or the wobble in the axis of rotation of the disc warp is incorrect. The results have just been published in The Astrophysical Journal.

The Milky Way is a spiral galaxy, which means that it is composed, among other components, of a disc of stars, gas and dust, in which the spiral arms are contained. At first, it was thought that the disc was completely flat, but for some decades now it is known that the outermost part of the disc is distorted into what is called a "warp": in one direction it is twisted upwards, and in the opposite direction downwards. The stars, the gas, and the dust are all warped, and so are not in the same plane as the extended inner part of the disc, and an axis perpendicular to the planes of the warp defines their rotation.

In 2020, an investigation announced the detection of the precession of the warp of the Milky Way disc, which means that the deformation in this outer region is not static, but that just like a spinning top the orientation of its axis is itself rotating with time. Furthermore, these researchers found that it was quicker than the theories predicted, a cycle every 600-700 million years, some three times the time it takes the Sun to travel once round the centre of the Galaxy.

Precession is not a phenomenon which occurs only in galaxies, it also happens to our planet. As well as its annual revolution around the Sun, and its rotation period of 24 hours, the axis of the Earth precesses, which implies that the celestial pole is not always close to the present pole star, but that (as an example) 14,000 years ago it was close to the star Vega.

Now, a new study by ?ofia Chrobáková and Martín López Corredoira has taken into account the variation of the amplitude of the warp with the ages of the stars. The study concludes that, using the warp of the old stars whose velocities have been measured, it is possible that the precession can disappear, or at least become slower than what is presently believed. To arrive at this result the researchers have used data from the Gaia Mission of the European Space Agency (ESA), analysing the positions and velocities of hundreds of millions of stars in the outer disc.

"This does not necessarily mean that the warp does not precess at all, it could do so, but much more slowly, and we are probably unable to measure this motion until we obtain better data", concludes Martín López Corredoira, and IAC researcher and co-author of the article.