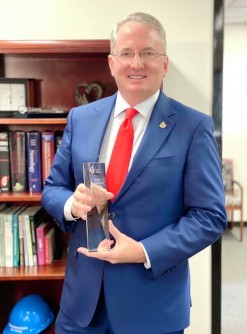 This article was written by American Heart Association editorial staff.

While two national committees regarding quality of care for heart disease and stroke patients each served a unique purpose, there also was some overlap. That wasn't a problem – it was an opportunity.

To get the most out of this opportunity, executives wanted the same person to lead both groups. And that person, they knew, should be John Warner, M.D., Executive Vice President for Health System Affairs and Health System Chief Executive Officer at UT Southwestern.

Dr. Warner heeded the call, of course. A difference-maker since 2003, a national board member since 2014 and president in 2017-18, he's long been one of the AHA's go-to guys for getting things done.

"I'm a good listener," said Dr. Warner. "I know a good idea when I hear it, and I can help people move the work forward to get it to the finish line. I especially like doing that with big ideas, things that have broad impact."

For all he's done – and continues to do – for the AHA, Dr. Warner on June 28 received the Gold Heart Award, the organization's highest volunteer honor.

"John is a leader in every way and in the best of ways," AHA CEO Nancy Brown said. "As a cardiologist-turned-CEO, he brings an extraordinary view to the landscape of health care. We are a better organization because of him."

Dr. Warner's transition from the cath lab to boardrooms is unique. He credits the AHA for having spurred it.

The path traces all the way back to the earliest days of his career. Fresh out of medical school, he saw too many patients coming to the ER because they had no other options for basic care. While helping them 1-on-1 was fulfilling, he aspired to help change the public health system.

That desire simmered for years. Then the AHA’s Dallas office needed a doctor with a personal connection to serve as a spokesman on a push to ban smoking in public places.

As the grandson of a smoker who'd had a heart attack, Warner was a perfect fit. With his help, the law was changed.

"It taught me that you have to do more than just care about something," he said. "You need a well-oiled machine. It takes structure, organization and strategies. Seeing it applied by AHA and in partnership with other organizations was a learning moment. I wanted to be more involved."

Dr. Warner took on a larger role in launching a program that brought together EMS and hospitals to speed treatment for people in Dallas who experience a severe type of heart attack known as a STEMI. By tightening the chain of survival, patients had their blocked arteries opened faster.

The variety of skills Dr. Warner tapped into as an AHA volunteer prepared him for what turned out to be a career-defining opportunity at UT Southwestern.

In 2010, the system decided to build a new hospital. The president wanted an active clinician to oversee the project. Dr. Warner got the job.

Meanwhile, Dr. Warner took his AHA involvement from the local and regional levels to the national level.

In 2014, he joined the national board and became chair of the Advocacy Coordinating Committee. The next year, he chaired the Strategic Planning Task Force. Then came a year as president-elect, his yearlong presidential tenure and a year as immediate past president.

When the COVID-19 pandemic broke out, Dr. Warner was early in his tenure as chair of the two quality committees (Quality Oversight Committee and the Quality Accreditation Business Management Committee). Yet it was in his role as a friend that he took a call one Sunday from his UTSW colleague, Dr. James De Lemos.

Dr. De Lemos wanted to start a registry of COVID-19 patient data to study the cardiovascular impact. Warner took the idea to Brown. Within days, the AHA launched the first-of-its-kind COVID-19 CVD Registry.

"I feel like my biggest contribution is contributing to a lot of things," he said. "I don't have a signature ability or project or cause. I'm like a utility baseball player who's able to play a lot of positions."

Dr. Warner can take on so many roles because he's always eager to learn. He knows what he doesn't know and surrounds himself with leaders in their fields so he can learn from them.

"I like pulling people out," Dr. Warner said. "Instead of having the usual suspects, I try to diversify committees. I want to amplify the voices of others. I like to see through a lot of lenses and think creatively with other people about how to move the needle for larger groups."

Although the Gold Heart Award is akin to a lifetime achievement award, Dr. Warner has no plans to slow his involvement with the AHA.

In fact, he's thinking about other areas to explore.

"During my year as president, I traveled to a lot of countries and cultures, and it made me realize the problems in America are the problems everywhere," he said. "The AHA has a lot of momentum internationally. If they're looking for somebody to help with that, I'd be up for it."

Dr. Warner holds the Nancy and Jeremy Halbreich, Susan and Theodore Strauss Professorship in Cardiology, and the Jim and Norma Smith Distinguished Chair for Interventional Cardiology.

UT Southwestern, one of the nation’s premier academic medical centers, integrates pioneering biomedical research with exceptional clinical care and education. The institution’s faculty has received six Nobel Prizes, and includes 26 members of the National Academy of Sciences, 17 members of the National Academy of Medicine, and 14 Howard Hughes Medical Institute Investigators. The full-time faculty of more than 2,900 is responsible for groundbreaking medical advances and is committed to translating science-driven research quickly to new clinical treatments. UT Southwestern physicians provide care in more than 80 specialties to more than 100,000 hospitalized patients, more than 360,000 emergency room cases, and oversee nearly 4 million outpatient visits a year.