15-May-2017 10:00 AM EDT, by Children's Hospital of Philadelphia contact patient services
favorite_border 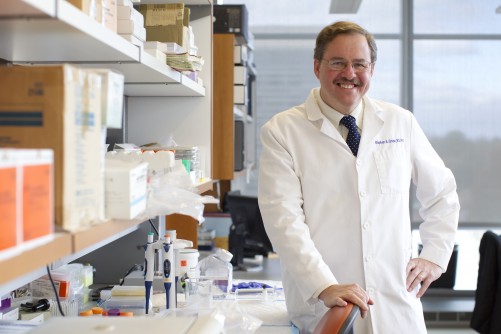 Dr. Stephan Grupp is a leading pediatric oncologist at Children's Hospital of Philadelphia

Philadelphia, May 15, 2017 – A leading pediatric oncologist at Children’s Hospital of Philadelphia (CHOP), Stephan Grupp, MD, PhD, will become Chief of the Section of Cellular Therapy and Transplant in the Hospital’s Division of Oncology. Grupp, who has researched and led groundbreaking clinical trials of an innovative T cell therapy for children with acute lymphoblastic leukemia (ALL), will assume this position on June 1.

“Dr. Grupp was the top candidate for this crucial position, and will now expand an already outstanding program that is revolutionizing cell therapy for children with resistant relapsed or refractory ALL and pioneering new strategies for stem cell transplantation,” said Stephen P. Hunger, MD, Chief of Pediatric Oncology and Director of the Center for Childhood Cancer Research at CHOP.

Grupp has been an attending physician and oncology researcher at CHOP since 1996, after earning his MD and a PhD in Immunology from the University of Cincinnati. He completed his clinical training in pediatrics and pediatric hematology/oncology at Boston Children’s Hospital, Dana Farber Cancer Institute, and Harvard Medical School, performing postdoctoral research in immunology at Harvard. He joined the University of Pennsylvania medical faculty in 1996, and is now a Professor of Pediatrics in Penn’s Perelman School of Medicine.

Since arriving at CHOP two decades ago, Grupp has led a basic science lab studying cell therapy, signal transduction and novel therapies in ALL and other pediatric cancers.  Reflecting the translational focus of his work, he also developed and led clinical trials that established tandem stem cell transplantation (two separate transplant procedures) as a standard of care for children with high-risk neuroblastoma. He helped to develop and lead clinical trials that resulted in FDA approval of a new treatment for veno-occlusive disease, a deadly complication of stem cell transplantation. In addition, he led the pediatric hematology/oncology fellowship training program at CHOP for almost a decade. Eight current CHOP faculty trained in his lab.

His outstanding contribution to oncology is in the clinical development of chimeric antigen receptor (CAR) T cell therapy for relapsed and refractory ALL in children and young adults. Collaborating with Dr. Carl June’s team at the University of Pennsylvania, Grupp’s lab did many of the preclinical in vivo studies, and then developed the first pediatric trial and treated the first pediatric patient at CHOP with CAR T cell therapy in 2012.

Responding to a life-threatening complication of T cell therapy, called cytokine release syndrome, he and his team pioneered a successful treatment for this complication, and thereby revolutionized T cell immunotherapy. Grupp and his colleagues at CHOP have since treated over 150 children with CAR T cell therapy, and he recently led the first multicenter global study of an engineered CAR T cell product that is expected to lead to FDA approval later this year.