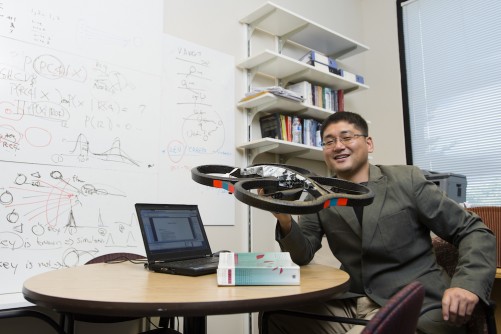 Donghyun Kim, assistant professor of computer science, explains how his new algorithm may solve one of the most complex problems with drone delivery.

Newswise — When delivery companies like FedEx, Amazon and UPS launch drones to deliver packages in the near future, one Kennesaw State computer science professor may be at the crux of solving one of its most complicated problems.

Donghyun (David) Kim, assistant professor of computer science and an expert in computer algorithm optimization, is designing a fast-running algorithm to tackle simultaneous coordination problems among multiple delivery trucks and the drones launched from them.

Kim’s study involves multiple robotic drone trajectory planning to figure out how best to distribute a given set of packages, by drone and truck, as they move concurrently. These trajectories have to be optimized simultaneously to avoid overlapping the delivery paths of multiple trucks and drones, according to Kim. The problem becomes extremely complicated when trying to consider which truck should deliver which package by drone, and how that drone will return to a moving vehicle, he added.

“A simplified form of this problem can be easily proven to be NP-hard. This means that when the input size of the problem is too big, it is unlikely to find an optimal solution within a practical time even using a state-of-the-art computer,” Kim said.

The development of his approximation algorithm, which is a simplified technical term to describe a sub-optimal fast-running algorithm with a mathematically proven worst-case performance guarantee, will help courier companies coordinate their efforts and save both time and money when operating multiple drone-assisted truck delivery systems.

“This research aims to develop a travel plan for multiple drones to perform a given surveillance task with minimum delay,” Kim said. “Drone technology is shaped by computer science in every aspect.”

Kim is using mathematical models within computer science and mathematics to find a solution, an offshoot of the traveling salesman problem, or TSP, a well-known computational issue related to vehicle routing issues. Kim presented his first result of this kind of complex problem with drones at IEEE INFOCOM, the nation’s premier computer communications conference, in 2012.

“Around that time, I observed many researchers who did not notice the complexity of this problem and used a very rough planning strategy to operate multiple robotic vehicles, such as drones,” said Kim, who has been conducting research on aerial robotic technology since 2012.

Kim said he believes his latest research is a major revelation in the area of optimization. His new development will enable coordinated drone delivery and may apply to any industry where multiple drones must effectively communicate while performing tasks simultaneously.

His latest study, “On Theoretical Trajectory Planning of Multiple Drones to Minimize Latency in Search-and-Reconnaissance Operation,” was recently accepted for publication in IEEE Transactions on Mobile Computing.