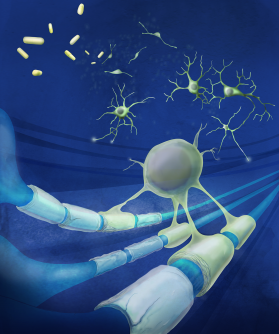 Two FDA approved drugs were found to stimulate stem cells in the brain and spinal cord to regenerate to the protective coating around neurons that is damaged in diseases such as multiple sclerosis.

Newswise — A pair of topical medicines already alleviating skin conditions each may prove to have another, even more compelling use: instructing stem cells in the brain to reverse damage caused by multiple sclerosis.

Led by researchers at Case Western Reserve, a multi-institutional team used a new discovery approach to identify drugs that could activate mouse and human brain stem cells in the laboratory. The two most potent drugs – one that currently treats athlete’s foot, and the other, eczema – were capable of stimulating the regeneration of damaged brain cells and reversing paralysis when administered systemically to animal models of multiple sclerosis. The results are published online Monday, April 20, in the scientific journal Nature.

“We know that there are stem cells throughout the adult nervous system that are capable of repairing the damage caused by multiple sclerosis, but until now, we had no way to direct them to act,” said Paul Tesar, PhD, the Dr. Donald and Ruth Weber Goodman Professor of Innovative Therapeutics, and associate professor in the Department of Genetics & Genome Sciences at the Case Western Reserve School of Medicine. “Our approach was to find drugs that could catalyze the body’s own stem cells to replace the cells lost in multiple sclerosis.”

The findings mark the most promising developments to date in efforts to help the millions of people around the world who suffer from multiple sclerosis. The disease is the most common chronic neurological disorder among young adults, and results from aberrant immune cells destroying the protective coating, called myelin, around nerve cells in the brain and spinal cord.

Without myelin, neural signals cannot be transmitted properly along nerves; over time, a patient’s ability to walk, hold a cup or even see is inexorably eroded. Current multiple sclerosis therapies aim to slow further myelin destruction by the immune system, but the Case Western Reserve team used a new approach to create new myelin within the nervous system. Their work offers great promise of developing therapies that reverse disabilities caused by multiple sclerosis or similar neurological disorders.

“To replace damaged cells, much of the stem cell field has focused on direct transplantation of stem cell-derived tissues for regenerative medicine, and that approach is likely to provide enormous benefit down the road,” said Tesar, also a New York Stem Cell Foundation Robertson Investigator and member of the National Center for Regenerative Medicine. “But here we asked if we could find a faster and less invasive approach by using drugs to activate native stem cells already in the adult nervous system and direct them to form new myelin. Our ultimate goal was to enhance the body’s ability to repair itself.”

Tesar emphasized that much work remains before multiple sclerosis patients might benefit from the promising approach. Scientists still must find ways to transform the topical medications for internal use and determine their long-term efficacy and potential side effects. That said, using existing, federally approved drugs enhances the likelihood that the compounds can be made safe for human use.

Tesar and his colleagues could zero in on the two catalyzing medications only because of a breakthrough that his laboratory achieved in 2011. Specifically, the researchers developed a unique process to create massive quantities of a special type of stem cell called an oligodendrocyte progenitor cell (OPC). These OPCs are normally found throughout the adult brain and spinal cord, and therefore inaccessible to study. But once Tesar and his team could produce billions of the OPCs with relative ease, they could begin to test different existing drug formulations to determine which, if any, induced the OPCs to form new myelinating cells.

Using a state-of-the-art imaging microscope, the investigators quantified the effects of 727 previously known drugs, all of which have a history of use in patients, on OPCs in the laboratory. The most promising medications fell into two specific chemical classes. From there, the researchers found that miconazole and clobetasol performed best within the respective classes. Miconazole is found in an array of over-the-counter antifungal lotions and powders, including those to treat athlete’s foot. Clobetasol, meanwhile, is typically available by prescription to treat scalp and other skin conditions such as dermatitis. Neither had been previously considered as a therapeutic for multiple sclerosis, but testing revealed each had an ability to stimulate OPCs to form new myelinating cells. When administered systemically to lab mice afflicted with a multiple sclerosis-like disease, both drugs prompted native OPCs to regenerate new myelin.

“It was a striking reversal of disease severity in the mice,” said Robert Miller, PhD, a member of the neurosciences faculty at Case Western Reserve who, with Tesar, is a co-senior author of the Nature paper. The two collaborated on this project while Miller also served as Vice President for Research at Case Western Reserve; since June his primary appointments are at the George Washington University School of Medicine and Health Sciences, where he is Senior Associate Dean for Research and Vivian Gill Distinguished Research Chair. “The drugs that we identified are able to enhance the regenerative capacity of stem cells in the adult nervous system. This truly represents a paradigm shift in how we think about restoring function to multiple sclerosis patients.”

While the drugs proved to have extraordinary effects on mice, their impact on human patients will not be known fully until actual clinical trials. Nevertheless, Tesar and his team already have added reason for optimism; in addition to the tests with animal cells, they also tested the drugs on human stem cells – and saw the medication prompt a similar response as seen in the mouse cells. Both medications worked well, with miconazole demonstrating the more potent effects.

“We have pioneered technologies that enable us to generate both mouse and human OPCs in our laboratory,” said Fadi Najm, MBA, the first author of the study and Research Scientist in the Department of Genetics & Genome Sciences at the Case Western Reserve School of Medicine. “This uniquely positioned us to test if these drugs could also stimulate human OPCs to generate new myelinating cells.”

Tesar, who recently received the 2015 International Society for Stem Cell Research Outstanding Young Investigator Award, said investigators next will work to deepen their understanding of the mechanism by which these drugs act. Once these details are clear, researchers will modify the drugs to increase their effectiveness in people.

The team is enthusiastic that optimized versions of these two drugs can be advanced to clinical testing for multiple sclerosis in the future, but Tesar emphasized the danger of trying to use current versions for systemic human administration.

“We appreciate that some patients or their families feel they cannot wait for the development of specific approved medications,” Tesar said, “but off-label use of the current forms of these drugs is more likely to increase other health concerns than alleviate multiple sclerosis symptoms. We are working tirelessly to ready a safe and effective drug for clinical use.”

“The approach from Case Western Reserve University combines cutting-edge stem cell and drug screening technologies to develop new chemical therapeutics for myelin disorders,” said Christopher Austin, MD, director of the National Center for Advancing Translational Sciences (NCATS) at the National Institutes of Health (NIH). NCATS researchers performed key external validation experiments as part of the study. “It is clear that the discovery of drugs that control the function of stem cells in the body represents a promising new era in regenerative medicine.”