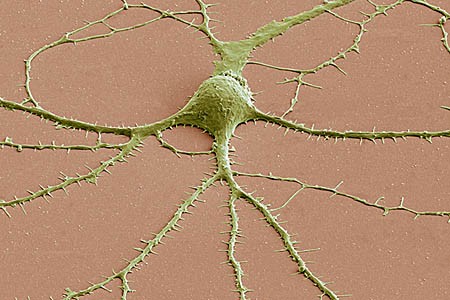 Newswise — Writing in the April 11 issue of The Journal of Clinical Investigation, researchers at University of California, San Diego School of Medicine say abnormalities in a protein that helps transport and sort materials inside cells are linked to axonal dysfunction and degeneration of neurons in Alzheimer’s disease (AD) and Down syndrome (DS).

“Amyloid plaques and neurofibrillary tangles in the brain are hallmarks of AD patients and people with DS. However, these classical manifestations may only become detectable in late stages of the disease,” said Chengbiao Wu, PhD, associate professor in the Department of Neurosciences at UC San Diego School of Medicine, and director for cellular and molecular biology at the UC San Diego Down Syndrome Center for Research and Treatment. “Effective treatments will have to target earlier changes that take place in the nerve cells, eventually leading to their demise. Our current study highlights the significance of abnormally active Rab5 protein as a key contributor to early development of the disease. We believe this will open new possibilities for understanding the disease and for developing novel and effective therapies.”

The endosome/lysosome or endocytic pathway in cells moves molecules, such as signaling proteins, from the surface or distant regions of a cell into the cell’s body (via compartments called endosomes) or to another type of cell organelle (lysosomes) where they can be recycled. A small molecule called Rab5 plays a key role in regulating these vital processes.

But in AD and DS, the endocytic system does not work properly, though the precise nature of the underlying dysfunction was not understood. In their new paper, Wu and colleagues suggest a major reason is abnormally enlarged versions of Rab5-endosomes, which occur early and precede the onset of dementia and emergence of the amyloid plaques and neurofibrillary tangles that characterize AD and DS.

Specifically, the scientists determined that increased accumulation of amyloid precursor protein (APP) and/or a small portion of APP (β-carboxyl terminal fragment) in neurons, boosts activation of Rab5, causing enlargement of early endosomes and disruption of retrograde axonal transport of nerve growth factors (NGF) signals. As a result, impacted neurons do not function normally.

The findings were based on tests with cultured cells and rodent models.

Wu said the research underscores the fundamental importance of endosomal function in regulating retrograde axonal trafficking, which conveys materials from axon to cell body, and signaling of NGF. He said further studies will be needed to determine whether reducing Rab5 activation prevents or reverses neurodegeneration in AD and DS.