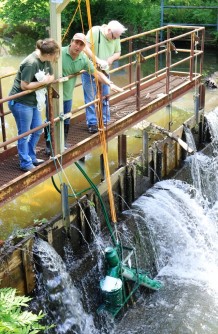 Eel experts and volunteers stand on the Sparkill Creek Eelevator, a project seeking to provide passage for American eels over barriers in the Hudson Valley.

Newswise — ITHACA, N.Y. – An “eelevator” designed and built by a team that includes Cornell University researchers is helping American eels survive their harrowing journey from the Atlantic Ocean to the Hudson River and into rivers in or near New York City.

In the past, eel ladders and “trap-and-pass” devices have been used on the Hudson River to give the fish access to the waters above dams. But in what may be a first, a liftable version placed on the Sparkill Creek in Rockland County is providing a new way to assist eels on their migration.

Hatched in the Sargasso Sea in the warm waters of the Atlantic Ocean, American eel larvae ride Gulf Stream currents north and enter North American estuaries as see-through “glass eels.” The migratory fish progressively gain pigment as they move inland, eventually becoming a brown or greenish color and growing to upwards of 4 feet in length.

Eels – with lifespans of up to 30 years and a large size range depending on their development stage – intersect with almost every level of the food web, from prey to predator, and are critical parts of the aquatic ecosystem, says Chris Bowser, an extension support specialist for Cornell’s New York State Water Resources Institute (WRI) in the College of Agriculture and Life Sciences, along with the NYS Department of Environmental Conservation. Dams and other barriers have placed ecological pressures on the American eel, drastically reducing numbers of the species.

“Our work in New York City is definitely ongoing. The Staten Island glass eel site has a strong partnership with the NYC Department of Environmental Protection, and several other organizations are interested in working with us to use eel mops, which are simple artificial habitat devices, to check out other potential eel habitats,” says Bowser. “We are also working with or have been consulted by several partners throughout the city. In some cases, like Hunts Point in the Bronx, the Harlem River, or the Saw Mill River in Yonkers, these organizations use eel mops as well to measure basic presence and abundance of glass eels and elvers. We’ve also worked with the Wildlife Conservation Society, the Bronx River Alliance, and Queens College who are monitoring eels at several places on the Bronx River.”

Residents of the town of Piermont approached Cornell staff at WRI , the Hudson River National Estuarine Research Reserve, the Hudson River Estuary Program, and the New England Interstate Water Pollution Control Commission with an interest in getting eels above the dam at a local pond.

The lightweight device can be raised, lowered and checked for eels by trained volunteers. Migrating eels seeking a way above the dam can climb a short ramp lined with old netting and kept wet by hoses from above. These eels – most often about 3 to 6 inches in length and in the “elver” stage of development – enter a bucket of circulating water that is checked twice weekly by volunteers. Sizes are recorded, and the eels are released above the dam to continue their life’s journey.

Brian Rahm, research associate at WRI, says, “The ‘eelevator’ is a great example of grassroots citizen-science where local residents team up with environmental researchers to conserve natural resources, including eels, on their way upstream.”

Since its inception in 2008, the Hudson River Eel Project has caught, counted and released more than 500,000 juvenile eels. The project has expanded to 14 sites, from Staten Island in New York City to Hudson River tributaries near Albany, and relies on volunteers to assess eel migration each spring and summer. Bowser said the “eelevator” concept could be expanded to more sites in the future.