Newswise — Woods Hole, MA (August 3, 2021) -- Today, the U. S Fish and Wildlife Service (USFWS) announced a proposal to list the emperor penguin as a threatened species under the Endangered Species Act (ESA) based on evidence that the animal's sea ice habitat is shrinking and is likely to continue to do so over the next several decades. Proposing a listing of threatened means the animal is at risk of becoming an endangered species--in danger of extinction--in the foreseeable future if its habitat continues to be destroyed or adversely changed.

Decades of studies by an international team of penguin researchers, including Stephanie Jenouvrier, associate scientist, and seabird ecologist at Woods Hole Oceanographic Institution, were instrumental in establishing the need for protections and highlighting that urgent climate action is needed to protect the species.  Emperor penguins are indicator species whose population trends can illustrate the consequences of climate changes.  These iconic birds need reliable sea ice for breeding and raising their chicks and are being pushed toward extinction by the climate crisis melting the sea ice they need for survival and reproduction.

"This proposal is an important step for raising awareness about the impact of climate change,” said Jenouvrier.  "Emperor penguins, like many species on earth, face a very difficult climate future.”

"This is just one important step forward for the emperor penguin,” added Philip Trathan, the head of conservation biology with the British Antarctic Survey (BAS) "Additional conservation actions including increased protection at breeding sites and foraging grounds are also necessary.”

Research from penguin scientists is key to informing policy around much-needed protections for the emperor penguin.

The proposal was rooted in foundational research and findings that scientists provided to USFWS, including a study in Global Change Biology, also publishing today, recommending that emperor penguins be listed as threatened under the Endangered Species Act.  This new study, co-authored by an interdisciplinary team of scientists, policy experts, ecologists, and climate scientists, illustrates that by 2100, under emissions scenarios resulting from current energy-system trends and policies, emperor penguins will be in danger of extinction throughout its entire range.

Another pivotal study in Biological Conservation (January 2020) highlights the need to improve the forecasting of ecological responses to climate change as it specifically relates to the effective management of the emperor penguin.

Emperor penguins are especially vulnerable to climate change because, like polar bears in the Arctic, they depend on sea ice for vital life activities like breeding, feeding, and molting. And not just any ice conditions will do for the penguins. Ice stability is crucial.  “The reason it’s important to have a thick, stable platform of sea ice is that the chicks that are raised during the breeding season in winter, they have this downy plumage, but they need to acquire waterproof plumage to be able to survive at sea in the cold water,” Jenouvrier explained. “If the sea ice breaks up too early in the season, they will not have acquired their waterproof plumage, and they will drown and die in the Antarctic water, so it will be a complete breeding failure.”

In 2016 an emperor penguin colony in Antarctic’s Halley Bay in the Weddell Sea suffered catastrophic breeding failure due to record-low sea ice and early ice breakup. More than 10,000 chicks are thought to have drowned when the sea ice broke up before they were ready to swim.  The new study tailored for the needs of the ESA, included this type of extreme events.

This recommendation under the Endangered Species Act is a first step to address threats to the iconic penguin, including the greenhouse gas pollution driving climate change and industrial overfishing of key prey species. Federal agencies would be required to ensure that their actions, including those generating large volumes of carbon pollution, do not jeopardize the penguin or its habitat.

Emperor penguins – the world’s largest penguin species – breed and molt on sea ice, that is frozen seawater.   Of the 18 different species of penguins, only two (the emperor and Adélie) are true Antarctic residents.  Emperor penguins are extremely vulnerable to a warming climate. They are well adapted to thrive in freezing conditions, but in parts of the Antarctic Peninsula, sea ice cover has reduced by over 60% in 30 years and one colony has virtually disappeared.  Emperor penguins are a vital part of the Antarctic food chain- they prey upon krill, squid, and small fish and in turn are preyed upon by predators like leopard seals and killer whales.

For climate-threatened species, listing under the ESA mandates use of science-based, enforceable tools to reduce climate threats and increase resilience, including habitat protection and recovery planning by Federal agencies. The ESA is the world’s strongest environmental law focused on preventing extinction and facilitating recovery of imperiled species.  The ESA has increasingly been applied to provide protection for species threatened primarily, or in part, by climate change, with the polar bear being the first species listed principally due to global warming (2008).   Before a species can receive the protection provided by the ESA, it must first be added to the Federal lists of threatened and endangered wildlife.

“Although they are found in Antarctica, far from human civilization, they live in a delicate balance with their environment, which today is rapidly changing - they have become modern-day canaries,” explained Jenouvrier.  “If the world would take aggressive actions to reduce greenhouse gas emission now, and the Paris Climate Agreement objectives are met, declines will be much less severe.”

“The future of this iconic species, and others, depends on immediate and increased protection”, added Trathan.   “This is a positive step, but there is much more to be done.  With knowledge comes responsibility and so we must act before it is too late.”

Link to images and graphics: assets

About Woods Hole Oceanographic Institution:
The Woods Hole Oceanographic Institution (WHOI) is a private, non-profit organization on Cape Cod, Massachusetts, dedicated to marine research, engineering, and higher education. Established in 1930, its primary mission is to understand the ocean and its interaction with the Earth as a whole, and to communicate an understanding of the ocean’s role in the changing global environment. WHOI’s pioneering discoveries stem from an ideal combination of science and engineering—one that has made it one of the most trusted and technically advanced leaders in basic and applied ocean research and exploration anywhere. WHOI is known for its multidisciplinary approach, superior ship operations, and unparalleled deep-sea robotics 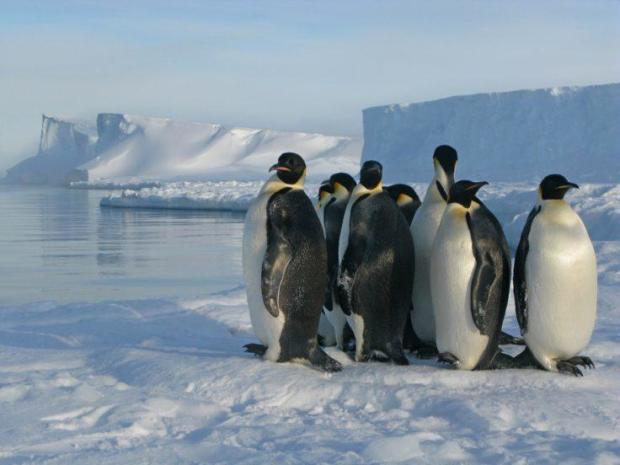 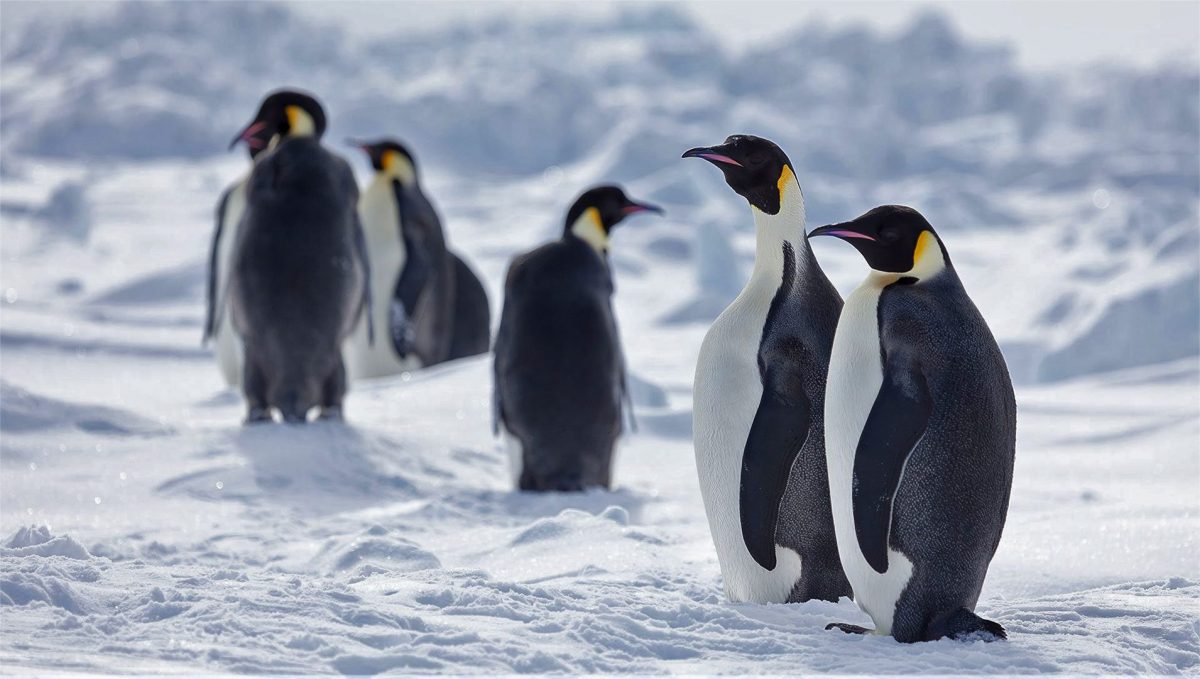 Caption: A group of six emperor penguins standing on the ice. U.S. Fish & Wildlife Service announced a proposal to list the emperor penguin as threatened under the Endangered Species Act (ESA), based on evidence that the animal's sea ice habitat is shrinking and is likely to continue to do so over the next several decades 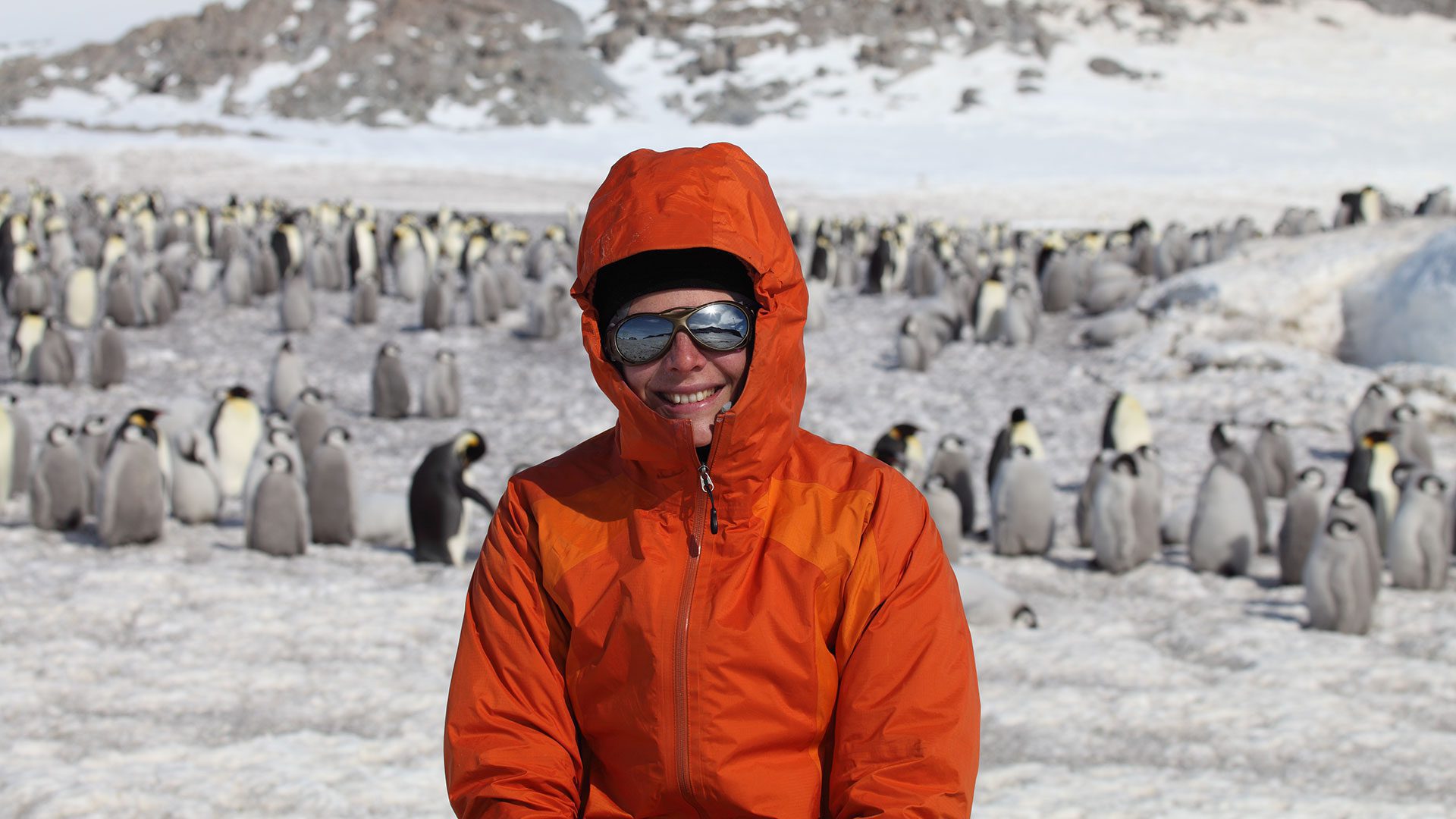 Caption: WHOI associate scientist and seabird ecologist Stephanie Jenouvrier working out in the field with emperor penguins. Research from penguin scientists is key to informing policy around much-needed protections for the emperor penguin.