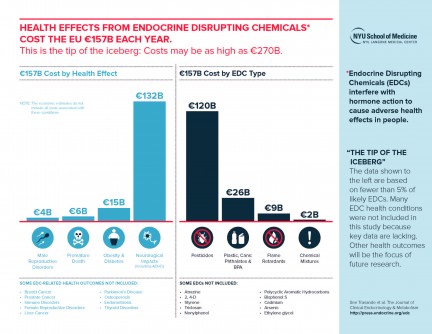 The authors presented the findings today at simultaneous press events at ENDO 2015, the Endocrine Society’s 97th Annual Meeting & Expo, and in Brussels, Belgium.

Global experts in this field concluded that infertility and male reproductive dysfunctions, birth defects, obesity, diabetes, cardiovascular disease, and neurobehavioral and learning disorders were among the conditions than can be attributed in part to exposure to endocrine-disrupting chemicals (EDCs). The €157 billion estimate is conservative, and represents 1.23 percent of Europe’s gross domestic product (GDP). These costs may actually be as high as €270 billion ($359 billion), or 2% of GDP.

“The analysis demonstrates just how staggering the cost of widespread endocrine-disrupting chemical exposure is to society,” said Leonardo Trasande, MD, MPP, Associate Professor of Pediatrics, Environmental Medicine & Population Health at NYU Langone Medical Center, who led a team of eighteen researchers across eight countries in this landmark initiative. “This research crystalizes more than three decades of lab and population-based studies of endocrine-disrupting chemicals in the EU.”

EDCs mimic, block or interfere with the body’s hormones. EDCs include bisphenol A (BPA) found in till receipts and food can linings, certain phthalates found in plastic products and cosmetics, flame retardants and pesticides such as chlorpyrifos. Nearly 100 percent of people have detectable amounts of EDCs in their bodies, according to the introductory guide to EDCs published by the Endocrine Society and IPEN.

To assess the economic burden of EDC exposure, a group of scientists convened a panel of global EDC experts to adapt existing environmental health cost models, relying on the Institute of Medicine’s 1981 approach of assessing the contribution of environment factors in causing illness, to calculate the estimated cost burden of EDCs. Based on the body of established literature, the researchers evaluated the likelihood that EDCs contributed to various medical conditions and dysfunctions but limited the analysis to the disorders with the strongest scientific evidence.

“Although this analysis was limited to the European Union, the disease and cost burden of exposure is likely to be on the same order of magnitude in the United States and elsewhere in the world,” Trasande said.

In the EU, researchers found the biggest cost driver was loss of IQ and intellectual disabilities caused by prenatal exposure to pesticides containing organophosphates. The study estimated the harm done to unborn children costs society between €46.8 billion and €195 billion a year. About 13 million lost IQ points and 59,300 additional cases of intellectual disability per year can be attributed to organophosphate exposure.

“Our findings show that limiting exposure to the most common and hazardous endocrine-disrupting chemicals is likely to yield significant economic benefits,” said one of the study’s authors, Philippe Grandjean, MD, PhD, Professor of Environmental Medicine at the University of Southern Denmark and Adjunct Professor at the Harvard T.H. Chan School of Public Health. “This approach has the potential to inform decision-making in the environmental health arena. We are hoping to bring the latest endocrine science to the attention of policymakers as they weigh how to regulate these toxic chemicals.”

Other authors of the studies include: R. Thomas Zoeller of the University of Massachusetts in Amherst, MA; Ulla Hass of the National Food Institute at the Technical University of Denmark in Søborg, Denmark; Andreas Kortenkamp of Brunel University in Uxbridge, Middlesex, United Kingdom; John Peterson Myers of Environmental Health Services in Charlottesville, VA; Joseph DiGangi of IPEN in Gothenburg, Sweden; Martine Bellanger of EHESP School of Public Health in Paris, France; Russ Hauser of T.H. Chan Harvard School of Public Health in Boston, MA; Juliette Legler of VU University in Amsterdam, the Netherlands; Niels Skakkebaek, Anna Maria Andersson and Anders Juul of Rigshospitalet, EDMaRC and University of Copenhagen in Copenhagen, Denmark; Jerrold J. Heindel of National Institute of Environmental Health Sciences in Research Triangle Park, NC; Tony Fletcher of the London School of Hygiene and Tropical Medicine in London, UK; Eva Govarts of the Flemish Institute for Technological Research (VITO) in Mol, Belgium; Miquel Porta of the Universitat Autònoma de Barcelona, Hospital del Mar Institute of Medical Research and CIBERESP in Barcelona, Spain; Bruce Blumberg of the University of California, Irvine; Jorma Toppari of the University of Turku in Turku, Finland; and Barbara Demeneix of the National Center for Scientific Research (CRNS) at Muséum National d'Histoire Naturelle de Paris in Paris, France.

The studies were published online, ahead of print.