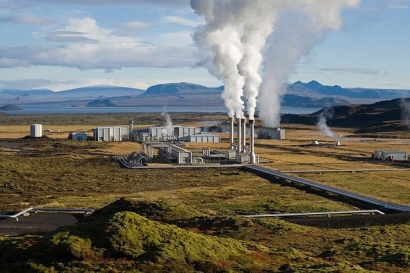 Toward the power of deep geothermal.

Newswise — CAMBRIDGE, MA—Challenges and progress toward the holy grail of geothermal energy—tapping into the superhot rock deep beneath our feet that could help wean the world from fossil fuels—were the focus of two hour-long sessions at PIVOT21, a geothermal conference July 19-23 featuring more than 165 experts in the field from around the world.

According to several of the session panelists, that superhot rock—anything over about 350 degrees Celsius—represents a vast resource, and the energy that could be derived from it has been underestimated.

“The ability to drill to about 20 kilometers [~12 miles] and 500 degrees Celsius [~932 F] could turn geothermal into a terawatt source of energy with the power densities of fossil fuels,” said Carlos Araque, CEO of Quaise Inc. and one of five panelists on a session about advanced drilling techniques that can survive such extreme conditions.

Conventional geothermal plants reach temperatures of about 230 degrees Celsius through holes about two kilometers deep. Superhot rock can be found close to the surface in a few areas like Iceland and near volcanoes, but for most of the world it is between seven and 20 kilometers down. Things get especially interesting over about 374 degrees C. Water pumped to rock that hot would become supercritical, a steam-like phase that most people aren’t familiar with. (Familiar phases are liquid water, ice, and the vapor that makes clouds.) Supercritical water, in turn, can carry some 5-10 times more energy than regular hot water, making it an extremely efficient energy source if it could be pumped above ground to turbines that could convert it into electricity.

There are many challenges, however, to reaching that superhot rock.  Key among them are drilling techniques that can withstand the extreme temperatures and pressures involved, according to panelists in a session titled “In Pursuit of the Holy Grail: Deep and Superhot Geothermal.” The conventional drill bits used in the oil and gas industry fail under those conditions. Fortunately, “I see coming down the pike a number of really high potential…drilling methods,” said Susan Petty, chief technology officer at Cyrq Energy and the president and founder of AltaRock Energy, Inc.

Other important challenges include electronics that can also withstand the extreme conditions; materials for lining and supporting the boreholes that can survive repeated thermal cycling, or large changes in temperature; and the need for more data to characterize subsurface rock conditions.

With respect to thermal cycling, “I think the problem is moving towards being solved,” said Petty, thanks to innovations like self-healing cements that recrystallize to fix any fractures that form. Mark Ireland, a lecturer in energy geoscience at Newcastle University, addressed the need for more data. “We haven’t got that many calibration points once we get into these very deep systems,” he said.

To that end, Ireland and others emphasized the need for collaboration between the groups worldwide that are exploring superhot geothermal. “Open access to the data and models that are underpinning these pilot projects are key,” he said. Then “we can open the lid on the box and explore all the different parameters in it, and compare and contrast how we’re characterizing the potential resource. The more we’re able to share, the better our decision making.”

Other panelists in the session were moderator Steinar Örn Jónsson, the legal and policy advisor of GEORG, an international geothermal research cluster based in Iceland; Gioia Falcone, Rankine Chair of Energy Engineering at the University of Glasgow; and Carsten Sørlie, project leader for Equinor’s technology initiative on geothermal energy.

The panelists in the following session went into more detail about drilling techniques currently under development that could allow access to the superhot rock miles down. These range from using millimeter wave energy to actually vaporize the rock to a technique involving small projectiles shot at hypersonic speeds that pulverize the rock and pave the way for a drill bit.

Quaise Inc. uses a machine called a gyrotron to create millimeter wave energy, a cousin to the microwaves for cooking, that is directed to deep, hot rock via waveguides. A gas that accompanies the millimeter waves brings the vaporized rock back up to the surface. Carlos Araque, CEO of Quaise, emphasizes the “plug and play” aspect of the system, where conventional drilling techniques are used in the shallower rock they were optimized for then are switched over to the millimeter wave technology for harder, hotter, deeper rock. The company is currently going into field trials, which will include “working with a large [conventional] drilling company to integrate our drilling system into theirs,” said Araque.

Igor Kocis is CEO of GA Drilling (the GA stands for Geothermal Anywhere). His company uses plasma, an energized gas, to break deep, hard rock into tiny pieces. Like Quaise, GA Drilling is also “trying to utilize as much as possible from conventional systems,” Kocis said. The company, founded in 2008, has its own state-of-the-art technology facility near Bratislava, Slovakia that can reproduce the high pressures and temperatures far underground. Over the next few years GA Drilling, too, aims to collaborate with another drilling company in the field.

Mark Russell, founder of Hypersciences, described how the company’s hypersonic projectiles fired in front of a rotating bit allow it “to drill about 10 times faster in hard, deep, high-temperature rock.” Russell noted that the technology behind Hypersciences, which is also in field trials, is also being applied to tunneling and mining, and even aerospace.

Yet another approach to deep drilling combines high-pressure water jetting with percussive drilling. Naveen Velmurugan is the scientific and technical manager of the ORCHYD project, which is developing this technique. The project, funded by the European Union, is led by researchers from ARMINES/ MINES-ParisTech in France. Their partners include Imperial College London (UK), SINTEF (Norway), University of Piraeus (Greece), China University of Petroleum (East-China) and Drillstar Industries (France).

“The Future of Drilling for Deep Geothermal” session was moderated by Jody Robins, senior geothermal engineer at the National Renewable Energy Laboratory (NREL). The PIVOT 21 sessions were taped and can be seen at the PIVOT21 web site, which is also home to a variety of additional resources about geothermal energy.