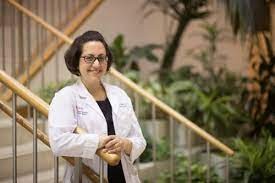 New Brunswick, N.J., July 13, 2021 – According to the National Cancer Institute (NCI), from 2001 to 2018, declines in lung cancer death rates accelerated, and death rates for melanoma declined considerably than in more recent years, reflecting a substantial increase in survival for metastatic melanoma.

These findings are part of the NCI’s recently released Annual Report to the Nation, a collaborate effort among the American Cancer Society (ACS); the Centers for Disease Control and Prevention (CDC); the National Cancer Institute, part of the National Institutes of Health; and the North American Association of Central Cancer Registries (NAACCR).

“The decline from 2001-2018 in the death rate from lung cancer is a sign of excellent progress due in part to new, targeted therapies, immune checkpoint inhibitors and health efforts such as smoking cessation, shares Salma Jabbour, MD, radiation oncologist at Rutgers Cancer Institute and clinical chief of Radiation Oncology at Robert Wood Johnson University Hospital, an RWJBarnabas Health facility. “There is still, however, work to do, with some cancer death rates leveling off and others increasing. We must continue to encourage healthy lifestyles and continue to conduct novel research to reduce deaths from all cancers.”

“These findings are certainly very interesting because we know the incidence of melanoma has been dramatically increasing over this time period. However, through a combination of effective screening and early diagnosis, the death rates are not actually going up, said Adam C. Berger, MD, FACS, chief of Melanoma and Soft Tissue Surgical Oncology at Rutgers Cancer Institute. “The improvement in survival is mostly likely attributable to the advances in therapy for later stage melanoma which include immunotherapy agents such as PD-1 and CTLA-4 inhibitors as well as targeted therapy such as BRAF and MEK inhibitors.”

The full report from can be found here.