Noninvasive Option to Benefit Patients With Most Common Movement Disorder

Jeff Elias, MD, of the University of Virginia School of Medicine, discusses the focused ultrasound technology and its potential applications. 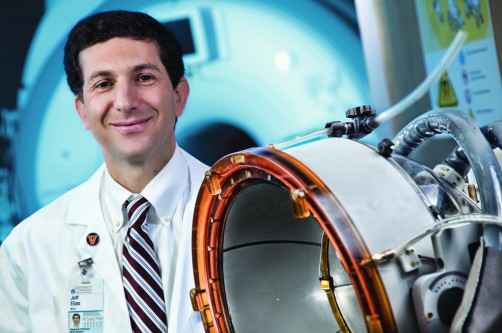 Jeff Elias, MD, of the University of Virginia School of Medicine, has pioneered the use of focused ultrasound for the treatment of essential tremor. The FDA has just approved the ultrasound device for that purpose, paving the way for the treatment to become available to patients.

Newswise — The Food and Drug Administration has approved the first focused ultrasound device to treat essential tremor, the most common movement disorder, in patients who do not respond to medication. The scalpel-free approach has been pioneered by Jeff Elias, MD, at the University of Virginia School of Medicine, who led an international clinical trial that demonstrated the safety and effectiveness of the device.

“This is a monumental day for people with essential tremor,” Elias said. “All patients want more options that are less invasive when they are faced with a surgical procedure. Also, this decision represents a great advance for focused ultrasound technology, which is now capable and available to treat disorders of the brain. Soon we are likely to see this incredible technology applied to other conditions and diseases of the brain.” How Focused Ultrasound WorksThe technology focuses sound waves inside the brain to create heat, much like a magnifying glass focuses light. That heat can then be used to carefully interrupt circuits of the brain that are responsible for the tremor. With magnetic resonance imaging, Elias can monitor the location and intensity of the procedure in real-time – an important safety feature when making a precise lesion deep inside the brain. He can actually watch as the tremor reduces.

Elias oversaw an international clinical trial of the device tested in 76 patients with severe tremor who had not responded to medication. Fifty-six participants in the double-blind study received the procedure, while 20 others were in a control group that received a sham procedure. The results were dramatic: Overall, those treated saw their tremor reduced by half after three months and by 40 percent after a year.

The most common side effects of the procedures were sensory changes like numbness or tingling as well as balance disturbance that tended to be transient. Nineteen of the 20 patients who received the sham procedure during the trial went on to receive the focused-ultrasound procedure.

Now Available for PatientsThe FDA approval of the ExAblate focused ultrasound device, manufactured by InSightec Inc., means UVA can make the procedure available to eligible patients. It is important to note, however, that insurance plans will not yet cover the procedure. The cost at UVA has not yet been determined.

People interested in the procedure can learn more at: uvahealth.com/focusedultrasound

The procedure cannot be used in patients who cannot undergo magnetic-resonance imaging, including those with implanted metallic devices such as a pacemaker. It is also not available for pregnant women, people with heart conditions or very high blood pressure, patients with kidney disease or clotting disorders, patients on blood thinners, patients with a history of strokes or brain tumors and people with substance abuse issues. There are other exclusions as well. Doctors at UVA will evaluate potential patients to determine their eligibility and then recommend the best course of treatment.

Groundbreaking ResearchUVA is a world-leader in focused ultrasound research. Elias and other scientists are testing the capability of focused ultrasound to treat Parkinson’s disease, epilepsy, brain tumors, and benign breast tumors. The research has been supported by the Focused Ultrasound Foundation and the BIRD (U.S.-Israel Binational Industry Research and Development) Foundation.

“This milestone was accomplished as the result of the leadership of Dr. Elias in a collaborative effort between academic institutions, industry and philanthropic organizations,” said Neal F. Kassell, MD, chairman of the Focused Ultrasound Foundation.