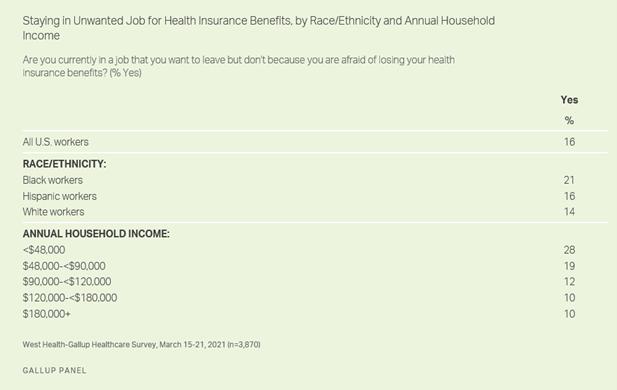 The survey finds the fear is even more pronounced among Black workers, who are 50% more likely to remain in an unwanted job than their White and Hispanic counterparts (21% to 14% and 16%, respectively).

Newswise — WASHINGTON, DC - MAY 6, 2021 - One out of every six adult workers (16%) in the United States are staying in jobs they might otherwise leave out of fear of losing their employer-sponsored health insurance, according to a new West Health-Gallup survey of more than 3,800 U.S. adults.

The survey finds the fear is even more pronounced among Black workers, who are 50% more likely to remain in an unwanted job than their White and Hispanic counterparts (21% to 14% and 16%, respectively).

But the most likely to stay in a job they would rather leave are those workers in households earning less than $48,000 a year -- roughly 3 in 10 (28%) say they will not leave and risk losing their health benefits. Workers in lower income households are nearly three times more likely to stay in an unwanted job than are workers living in households earning at least $120,000 per year. According to a report by the Congressional Research Service, 37% of U.S. households earned less than $50,000 in 2019. Approximately 158 million people receive health insurance via their own employer or via the employer of a household member.

"Healthcare costs have become so high that many Americans are unwilling to risk any disruption in their coverage even if that means higher and higher premiums and deductibles and sticking with a job they may not like," said Tim Lash, chief strategy officer for West Health, a family of nonprofit and nonpartisan organizations dedicated to lowering healthcare costs to enable successful aging. "Americans are increasingly concerned that they will get priced out of the U.S. healthcare system and are struggling to hang on in any way they can."

Earlier this year, an estimated 46 million or 18% of the U.S. population reported that they could not afford healthcare if they needed it today. In this latest survey, three times as many Americans or approximately135 million adults, are worried that they will eventually be priced out of healthcare if they are not already.

Specifically, more than half of respondents report they are "concerned" or "very concerned" the cost of healthcare services (53%) and prescription drugs (52%) will become unaffordable. More Americans worry about rising healthcare costs even more than losing one's home (25%) or job (29%).

Black and Hispanic adults have modestly elevated concerns about the rising costs of healthcare compared to White adults. Two-fifths (42%) of respondents, in turn, report concern that they would not be able to pay for a major health event, including 49% of Hispanic adults and 47% of Black adults.

Substantial concerns about the rising cost of care and medicine likely play a role in explaining why most respondents in the survey support the federal government taking a bigger role in lowering healthcare costs regardless of their political affiliation, racial background, or type of insurance.

About three-quarters favor setting limits on prescription drug price increases (77%), capping hospital prices in areas with few or no other hospitals (76%), and having the government negotiate lower prices for some high-cost drugs without lower-priced alternatives (74%).

Another 65% support placing government limits on prices for out-of-network care (65%). Those with private insurance were just as likely as those on public health plans including Medicare and Medicaid to favor government intervention.

"Polling data from West Health and Gallup continue to demonstrate that most Americans are supportive of an elevated government role in curtailing the rising costs of care," said Dan Witters, Gallup senior researcher. "How elected officials respond to this is unfolding, but there seems to be substantive public support for a number of specific proposals that are on the table."

This latest West Health-Gallup survey was conducted by web between March 15 and March 21, 2021 with 3,870 adults, ages 18+, living in all 50 U.S. states and the District of Columbia as part of the Gallup Panel. For results based on this sample of national adults, the margin of sampling error at the 95% confidence level is +2.2 percentage points for response percentages around 50% and is +1.3 percentage points for response percentages around 10% or 90%, design effect included. For reported sub-groups, the margin of error will be larger, typically ranging from ±3 to ±4 percentage points.

Gallup delivers analytics and advice to help leaders and organizations solve their most pressing problems. Combining more than 80 years of experience with its global reach, Gallup knows more about the attitudes and behaviors of employees, customers, students and citizens than any other organization in the world.