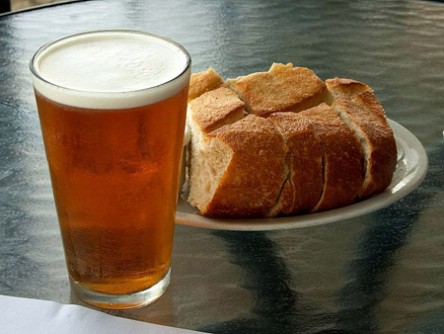 Microbiome and metabolome samples from fermented foods and the people who make them provided a successful test case for a new rapid response system that supports clinical application of this type of health information.

Newswise — The personalized collections of microorganisms and molecules found in, on and around us — known as our microbiome and metabolome, respectively — are increasingly recognized for their influences on everything from allergies to obesity. While advances in genetic sequencing and computing power have made it easier to map the minutiae of our bodies and environments, these types of studies typically take months or years — too long for that data to be medically useful. Researchers at the University of California San Diego Center for Microbiome Innovation used a study with the 2016 San Diego Fermentation Festival as a test case for a first-of-its-kind rapid response system.

In the study, published April 26 in mSystems, the team collected human and environmental samples, analyzed microbiome and metabolome data, and reported conclusions in an unprecedented 48 hours.

“When it comes to our health, we largely ignore at least half the cells in our bodies — the trillions of beneficial bacteria, viruses and other microbes that make up our microbiomes,” said co-senior author Rob Knight, PhD, director of the Center for Microbiome Innovation. “We already have the technology to apply microbial information to medical care, and now this pilot project helps streamline and standardize all the steps it would realistically take for clinicians to begin applying this new layer of health information to medical diagnoses and treatment decisions.”

In January 2016, Knight was invited to speak at the San Diego Fermentation Festival about microbiomes. Knight thought it would also be fun to use the event as an experiment. He was curious to see if people who regularly make and eat fermented foods (e.g., pickles, yogurt, beer) share microbes and molecules in common with the foods they make. He wondered if his team might be able to discern which person made which food, based on shared microbial signatures. Knight speculated that, due to their somewhat unusual hobby, fermenters’ personal microbiomes and metabolomes might also differ from non-fermenters.

Knight and his team received swabs of the fermenters’ food, kitchen surfaces, mouths, hands and fecal matter just days before the event. Though time was short, through the Center for Microbiome Innovation, the team leveraged the high-throughput gene sequencing capabilities of the Institute for Genomic Medicine and the processing power of the San Diego Supercomputer Center, both at UC San Diego. Knight enlisted a relatively small research team (six authors of this paper contributed to data analysis) and used the opportunity to see just how fast they could collect, process and analyze the samples.

Seven fermenters (two families and two individuals, or four households altogether) participated by enrolling in the American Gut Project, the world’s largest crowdsourced, crowdfunded science project, which is led by Knight and his team at UC San Diego School of Medicine. Besides providing a standardized, readily available mechanism for processing samples, the American Gut Project allowed researchers to compare the skin, oral and gut microbiomes of the fermenters to approximately 6,500 other people who previously had their samples sequenced through the project.

“In recent years we’ve come to appreciate the link between our microbiomes and our health, but we’re also now finding that the interplay between those microbes and their environmental context — the chemicals and other non-living molecules surrounding them — may be just as important to both microbial and human health,” said co-senior author Pieter Dorrestein, PhD, professor in the Skaggs School of Pharmacy and Pharmaceutical Sciences at UC San Diego and a faculty leader in the Center for Microbiome Innovation.

Dorrestein is an expert in metabolomics, the study of that chemical environment. While Knight’s team sequenced the microbial DNA collected from the samples to map which species were found where, Dorrestein’s team used a lab technique known as mass spectrometry to determine the molecular structures of all of the non-living molecules — chemicals, metabolites, food particles, everything — contained in the same samples. They detected 7,425 different structures, of which they were able to identify 100 based on known reference structures in Dorrestein’s GNPS database, a crowdsourced mass spectrometry data repository and annotation website.

The results were not exactly what the team expected. Knight’s team found that while the microbial species living in the fermented foods and indoor surfaces loosely clustered together, neither sample source had much overlap with the microbial species living in the human samples. However, thanks likely to their higher-than-average consumption of fermented foods, the fermenters did have more species diversity in their gut microbiomes than the average American Gut Project participant.

Meanwhile, Dorrestein’s team found fermented food molecules in the paired human and environmental samples. In other words, these foods influenced the chemical environments of the people consuming them. Most of the molecules they identified were plant natural products associated with fermented foods, such as flavonoids, lipids and plant sterols. These molecules were found on the skin and stool of people consuming them, some were metabolized and altered through digestion, possibly by the microbiome, and others remained intact. They also found other, non-plant-related molecules, such as cholesterol and avobenzone, an active ingredient in sunscreen.

More importantly, the team got these results in record time — and in time to present at the festival. They also submitted this paper for publication the same day.

“The sample size in this case study was relatively small and these fermenters didn’t need rapid data analysis, as would be required in a medical emergency or environmental or industrial crisis,” said co-first author Robert A. Quinn, PhD, assistant project scientist in the Center for Microbiome Innovation and Skaggs School of Pharmacy and Pharmaceutical Sciences, “but we showed here that we can obtain consent, collect samples and generate microbiome and metabolome data from people located up to 100 miles away from our lab, all in two days — the typical amount of time it takes for classic microbiological culturing of common pathogens, which pathologists currently use to diagnose infections.”