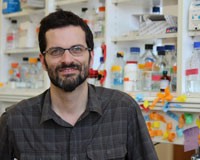 Newswise — BOSTON – (August 25, 2016) – Diabetes heightens the risk of vascular damage to heart and limbs, and impairs the ability to repair damage with new growth of blood vessels, called angiogenesis. There are no established drugs to improve angiogenesis in diabetes. However, researchers at Joslin Diabetes Center now have identified a gene called CITED2 in a molecular pathway that may offer targets for drugs that treat these conditions by strengthening angiogenesis.

“There’s a huge need to find treatments for vascular damage,” says Christian Rask-Madsen, M.D., Ph.D., Assistant Investigator in the Section of Vascular Cell Biology at Joslin Diabetes Center and Assistant Professor at Harvard Medical School, who led the research. Dr. Rask-Madsen’s lab focuses on how genes that are regulated by insulin can affect angiogenesis in type 2 diabetes and obesity.

In a study published today in the journal Diabetes, his team began with a clue from cancer researchers who genetically altered mice so that they didn’t express FOXO, a gene family known to suppress tumor formation. Surprisingly, these animals grew large amounts of new blood vessels.

Since the FOXO gene family is important for many actions of insulin, the scientists tested whether insulin regulated genes whose activity was changed by one member of the family in endothelial cells, which line the inside of blood vessels. They decided to follow up in detail on CITED2, whose expression is strongly suppressed by insulin. That suggested that CITED2 expression would be higher with the insulin resistance seen in type 2 diabetes and obesity. Moreover, CITED2 was known to diminish the expression of a gene called HIF that aids in activating angiogenesis.

The scientists went on to find that in mouse models with restricted blood supplies, higher expression of CITED2 correlated with lower expression of HIF. Additionally, in a human cell model used to study angiogenesis, cells and networks of cells grew more slowly when CITE2D was suppressed by adding insulin. When CITED2 was over-expressed in cells in this model, HIF activity dropped.

“CITED2 acts as a brake on HIF activity, and that brake is increased in diabetes and obesity, where you have increased CITED2,” Dr. Rask-Madsen says. “These results advance our understanding of insulin action on vascular cells, and they point to potential new therapeutic approaches to improve angiogenesis in patients with type 2 diabetes and obesity.”

His group hopes to study possible ways to diminish CITED2 expression through small molecules or other methods. The team also will look for related targets in the CITED2 molecular pathway, since the gene itself may regulate too many other genes to be directly targeted by drugs. Additionally, the scientists will analyze other insulin-regulated gene pathways that may be implicated in vascular damage.

Any future treatments to boost angiogenesis will need to proceed with particular care since angiogenesis can worsen another diabetic complication, Dr. Rask-Madsen notes. In diabetic proliferative retinopathy, the most advanced form of the diabetic eye complication, fragile and leaky blood vessels grow in the retina. Treatments that target this problematic growth by injecting anti-angiogenic agents in the eye have been approved. Certain cancer drugs also are designed to work by constraining angiogenesis.

But although candidate drugs for treating vascular conditions must avoid adding to such disease risks, Dr. Rask-Madsen stresses, this concern doesn’t lessen the need for new approaches to guarding against vascular damage. Cardiovascular disease is by far the leading cause of death in people with diabetes, he points out, and vascular damage greatly boosts the risks of chronic heart disease as well as foot ulcers and amputations.

“We have very few ways of improving angiogenesis in people with diabetes,” Dr. Rask-Madsen says. “We need to keep learning about how insulin regulation can affect vasculature, and we need to find better treatments.”

Joslin’s Xuanchun Wang and Samuel Lockhart are lead authors on the paper. Thomas Rathjen, Ditte Sørensen and Brian O'Neill of Joslin are co-authors. Important contributions also were made by Hassan Albadawi and Michael Watkins of Massachusetts General Hospital; Simone Preil, Hans Beck and Lars Rasmussen of Odense University Hospital in Odense, Denmark; and Sally Dunwoodie of Victor Chang Cardiac Research Institute in Darlinghurst, New South Wales, Australia. Lead funding for the research came from the National Institute of Diabetes and Digestive and Kidney Diseases’ Diabetic Complications Consortium, and from the National Cancer Institute.