A United States research team shows how electronically excited quantum dots can be imaged at multiple orientations to gain a fuller understanding of quantum dot behavior. 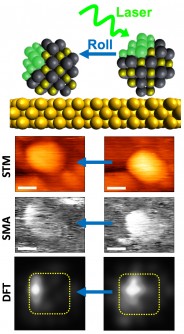 Researchers are still studying how to precisely control the growth of these nanoscale particles and their underlying quantum behavior. For instance, defects form during production of semiconductor materials, so identical dots can differ in composition from one another.

To learn more about these defects -- and whether they are a bane or an advantage -- a U.S. research team, from the University of Illinois and the University of Washington, has, for the first time, demonstrated imaging of an electronically excited quantum dot at multiple orientations. They report their findings this week in The Journal of Chemical Physics, from AIP Publishing.

“Understanding how the presence of defects localizes excited electronic states of quantum dots will help to advance the engineering of these nanoparticles,” said Martin Gruebele from the University of Illinois at Urbana-Champaign and a co-author of the paper.

Defects are often considered a hassle, but in the case of quantum dot applications, they are purposely created by doping any number of materials to impart specific functions. “[M]issing atoms in a quantum dot or substituting a different kind of atom are defects that will alter the electronic structure and change the semiconductivity, catalysis or other nanoparticle properties,” Gruebele said. “If we can learn to characterize them better and precisely control how they are produced, defects will become desirable dopants instead of a nuisance.”

In 2005, Gruebele’s team created a new imaging technique, called single molecule absorption scanning tunneling microscopy (SMA-STM), that combines the high spatial resolution of a scanning tunneling microscope with the spectral resolution of a laser. SMA-STM allows individual nanoparticles to be imaged in a laser beam, so their excited electronic structure can be visualized.

Using the thin, sharp metal wire tip of the scanning tunneling microscope, they roll the laser-excited quantum dot on the surface to image slices at different orientations. The slices can be combined to reconstruct a 3-D image of an electronically excited quantum dot.

While the research in this article was limited to lead sulfide and cadmium selenide/zinc sulfide quantum dots, the technique can potentially be expanded to other compositions. Furthermore, SMA-STM can also be used to explore other nanostructures, such as carbon nanotubes and photocatalytic metal clusters.

“We speculate that, in the future, it may be possible to do single-particle tomography if damage to quantum dots can be avoided during repeated manipulation,” Gruebele said.

Single-particle tomography would provide a clearer picture than conventional tomography by singling out defects in individual nanoparticles rather than re-creating an averaged 3-D image that combines the measurements of many particles.