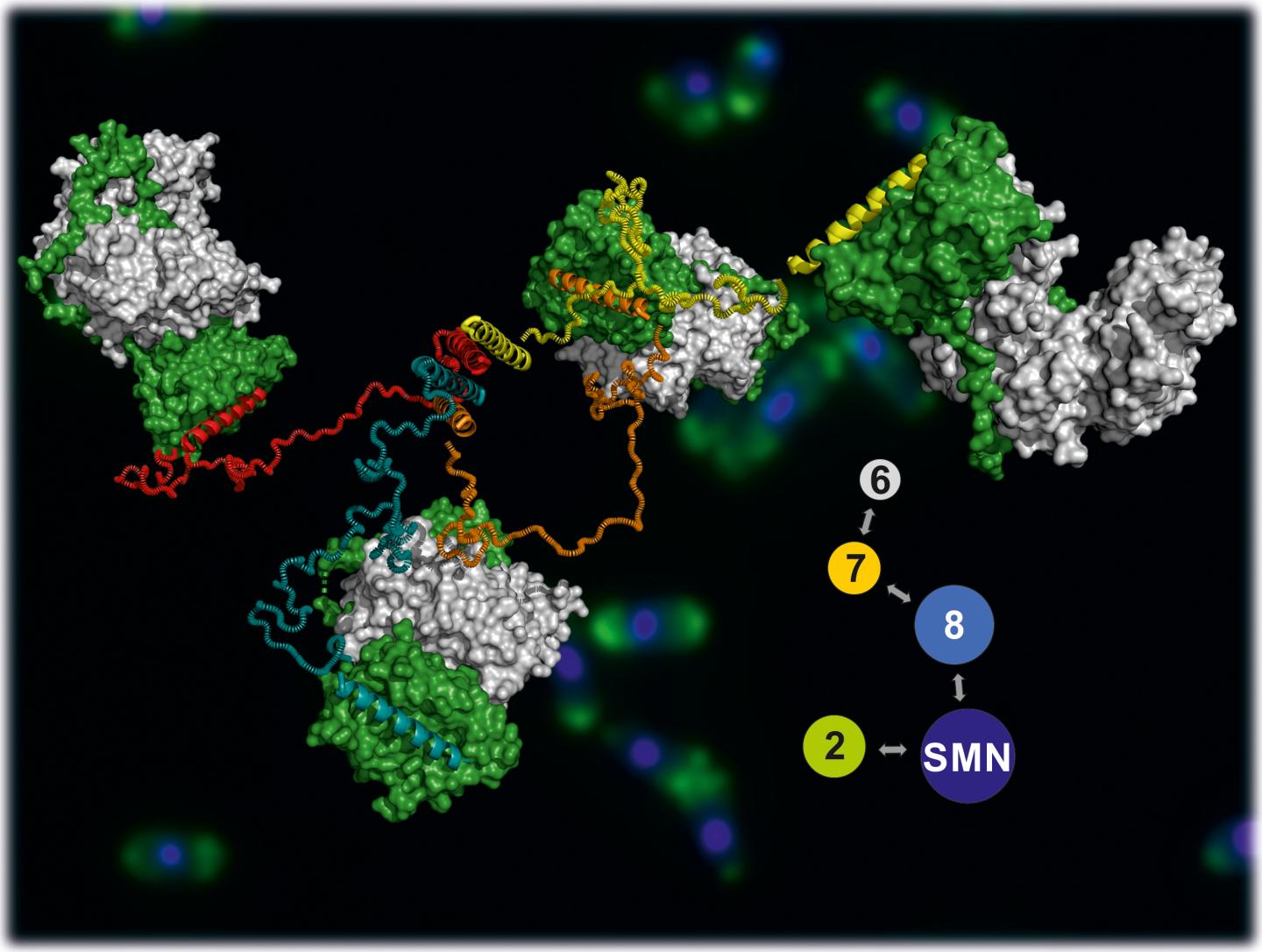 Model of the SMN complex, stained yeast cells can be seen in the background.

Newswise — SMN or in full Survival Motor Neuron: Professor Utz Fischer has been analyzing this protein and the large molecular complex of the same name, of which SMN is one of the building blocks, for many years. He holds the Chair of the Department of Biochemistry at the Julius-Maximilian's University of Würzburg (JMU), and he first discovered the molecule during his search for the root cause of spinal muscular atrophy. As scientists found out a few years ago, this disease is caused by a lack of the SNM complex.

The work group around Prof. Fischer has now succeeded in presenting a first three-dimensional model of the entire SNM complex. Once the structure of the complex is known, it is possible to understand the way how the complex works, and why the loss of its function leads to muscular atrophy. The scientists have published their findings in the current issue of the journal Nucleic Acids Research. The journal considers it to the a "Breakthrough Article".

The new findings have been made possible by an integrative structural-biological approach that combines biochemical, genetic and biophysical technologies.

Resolution up to a millionth of a millimeter

"The structural analysis of large and complex molecules in atomic detail has been made possible by the 'revolution-resolution', which was primarily brought about by the developments in cryo-electron microscopy", says Utz Fischer. The only snag about the technology, however, is the fact that it works best on structures that are more or less rigid and have few flexible sections.

Unfortunately, many molecular entities are not built like this, including the SMN complex. "This complex is of central importance for our cells because it supports the formation of molecular machines required for the expression of our genes", says Prof. Fischer. However, in order to serve its function in the cell, it must be highly flexible and dynamic. As a result, a structural analysis by traditional strategies has been impossible so far.

A combination of different methods was the key to success

Therefore the Fischer and his team chose an alternative approach: "Our starting point was a cooperation with the group of Dr. Rémy Bordonné from Montpellier in France, that enabled us to identify the SMN complex of the yeast Schizosaccharomyces pombe", he explains. This complex was ideally suited for an integrative structural analysis because it comprises less individual components than its human counterpart and has a less dynamic behavior.

"In a first step, we visualized, by X-ray diffraction analysis, individual sections that are important for keeping the complex together", says Fischer about the scientists' approach. In a second step, they characterized the entire complex and parts of it by means of small-angle X-ray scattering. This method also provides information on the dynamic behavior of unfolded sections of the complex. In parallel, missing sections were reconstructed by means of a bioinformatic method called 3D homology modeling.

This combination of different structural-biological methods will gain in importance in the future because it produces results that have never been achieved before - such is the conviction of Dr. Clemens Grimm. He is the Head of the "Structural Analysis" unit of Fischer's department, and has contributed to the recently published work.

An octopus with flexible arms

The result was a model of the entire SMN complex that provides an excellent explanation of its function. Similar as in an octopus, the central "body" of the complex has a number of long and very flexible "arms", which enable the complex to catch proteins and assemble them, together with other biomolecules, into molecular machines.

The model also provides insight into the processes that lead to spinal muscular atrophy. "The mutations causing this disease concentrate in the central body" explains Fischer's doctoral student Jyotishman Veepaschit, who performed experiments of this study together with his colleague Aravindan Viswanathan. They prevent the full development of the complex, so that it cannot serve its function in the cell.

Spinal muscular atrophy is a congenital disease that can appear in children, adolescents and adults with symptoms of variable severity. In its most severe forms, the patients affected by it die as early as infancy from the consequences of muscular weakness and progressive paralysis. In other cases, medical care including physiotherapy and orthopedic aids can preserve their mobility and vitality for quite some time.

Spinal muscular atrophy is not rare: It affects about one of 6,000 persons. Due to a genomic mutation, such persons suffer from a lack of the protein SMN. This lack manifests itself especially in the nerve cells that control muscle movements. These cells, known as motor neurons, lose their contact with the muscle and die.