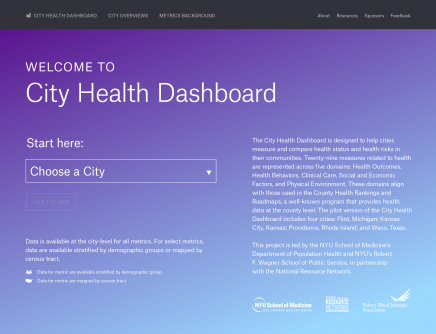 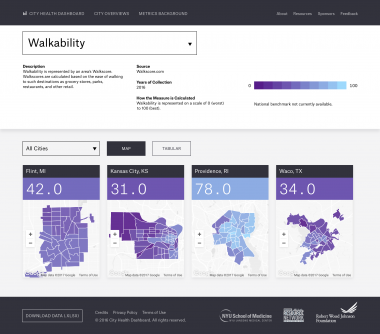 Newswise — Over 80 percent of the United States population lives in urban areas. Yet city leaders seeking to make health improvements have lacked a standardized tool to understand and benchmark their city’s standing on actionable and widely accepted indicators of health and health risk, because most health data in the U.S. is simply unavailable at the city level.

Responding to demands from cities across the country, NYU School of Medicine’s Department of Population Health, NYU’s Robert F. Wagner School of Public Service, and the National Resource Network, with support from the Robert Wood Johnson Foundation, are launching the City Health Dashboard. The online data visualization tool will greatly improve city-level understanding of health and empower mayors, city managers, health officials, and other local stakeholders to enact policies that target the risk factors and health conditions that most impact their communities.

“We created the City Health Dashboard in response to local demand for more accurate data about the health of our cities’ citizens,” says Marc Gourevitch, MD, MPH, chair of the Department of Population Health and principal investigator for the City Health Dashboard. “City leaders know that ‘what gets measured is what gets done.’ They want accurate, actionable data so they can improve their population’s health, bring down health care-related costs, and focus on community wellbeing. We’re excited to be the first to provide this important information at the city level in a uniform format across a wide range of health conditions and health determinants.”

All measures are presented at the city level and, where possible, by neighborhood, based on census tract, and by demographic group. The City Health Dashboard also displays national averages, so that cities can compare their data on select metrics to national values. Users can explore the data through easily navigable maps and tables to better understand health disparities within and across their cities.

The web tool has so far been piloted for four cities—Flint, Michigan; Kansas City, Kansas; Providence, Rhode Island; and Waco, Texas—selected through a competitive application process among cities involved in the National Resource Network. The National Resource Network is a Housing and Urban Development-funded program that leverages expertise from the public and private sectors to help cities address their most pressing challenges.

“In our work with nearly 50 cities across the nation, we have learned that city governments want to improve the physical health of their residents as much as the economic and fiscal health of their cities. But most health data in the U.S. is simply unavailable at the city level,” says David Eichenthal, executive director of the National Resource Network. “Now, through the City Health Dashboard, local decision makers in these four cities have the data that they need to work to create healthier communities.”

Flint, Kansas City, Providence, and Waco all face economic challenges, which are reflected in rates of children in poverty, unemployment, and high housing cost burden, according to City Health Dashboard data. Similarly, all of the pilot cities have higher teen birth and violent crime rates and lower high school graduation rates than the national average.

There are bright spots too. Jail incarceration is below the national average in Kansas City and Providence, and Providence also has lower adult obesity rates. But the greatest value of the City Health Dashboard, participating cities say, is that it paints a clear and accurate picture of priority areas for cities to target with improvement efforts.

Community leaders are already using the City Health Dashboard to solve challenging problems. Providence Mayor Jorge Elorza states, “By reporting city-level data on physical activity levels and obesity prevalence, the dashboard will help us evaluate our progress toward our goal of making the Providence one of the healthiest, most fit cities in New England. Physical fitness and overall wellness have been important priorities for my administration, and this exciting initiative gives us a new tool to build a healthy, strong, and vibrant city.”

“We are very fortunate to have this incredible resource available to us. As the mayor of a city whose residents face numerous health challenges, it is essential that we have access to data that gives us a better understanding of what those challenges are. Just as important, we need to know where in our city those challenges exist,” says Mark Holland, Mayor/CEO of the Unified Government of Wyandotte County and Kansas City, Kansas. “I’m very excited at the possibilities this opens up for our government and the residents of Kansas City, Kansas.”

And city manager of Waco, Dale Fisseler says, “I have been trying for a long time to get a better handle on the role of the healthcare sector and the potential for broader impact from the resources in that system. Already I can see that policy alternatives are illuminated by the dashboard, including relationships between spending by hospitals and by our city and county governments and inequities we need to tackle, which we long suspected but just didn’t have any data on before.”

The data for this dashboard are drawn from federal and state governments and organizations that apply rigorous methodology to data collection, including the U.S. Census Bureau, the Centers for Disease Control and Prevention, and the Environmental Protection Agency. The City Health Dashboard is available online at http://www.cityhealthdashboard.com and may be expanded to other cities in the future.

About the Department of Population Health at NYU Langone Medical Center The Department of Population Health at NYU School of Medicine unites research in the fields of medicine and public health to improve the health of populations in New York City and around the globe and educates students to become leaders in healthcare delivery, health policy, and public health. Partnering with colleagues at NYU Langone, NYU Lutheran, Bellevue Hospital, and diverse community and private sector organizations, the Department conducts basic and applied research to improve the quality and effectiveness of healthcare and to prevent and better manage disease. Visit us at med.nyu.edu/pophealth and interact with us on Twitter.