First report of dorsal navigation in a flying insect 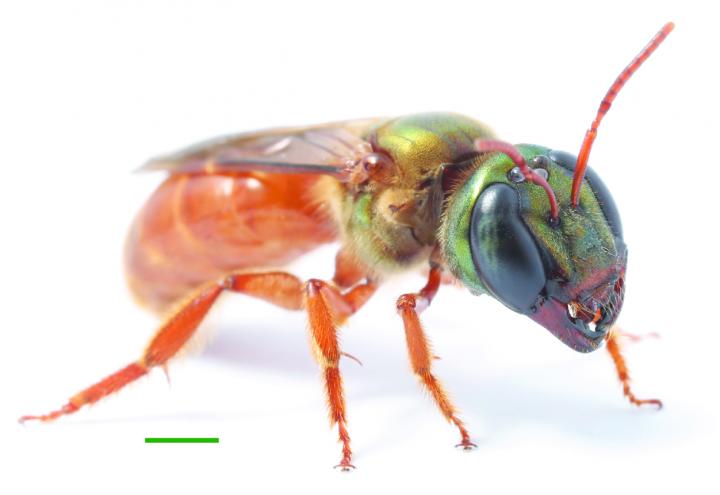 Megalopta genalis, a sweat bee, is able to see in very low light conditions. This study of M. genalis is the first report of the use of dorsal navigation by a flying insect. 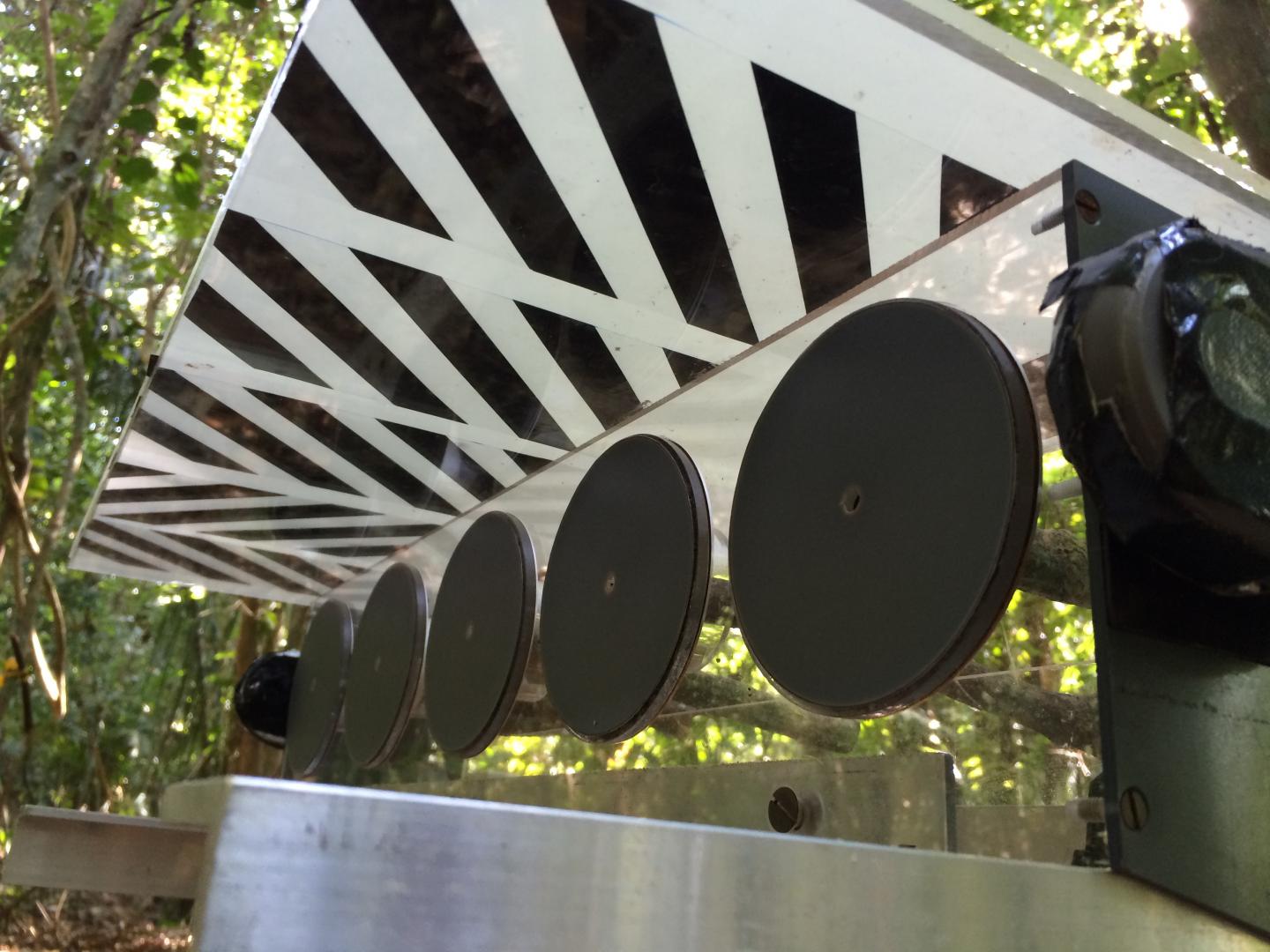 The entrances to bee nests were lined up under this awning showing different patterns. When the bees left a nest to forage, researchers switched the order of the nests, and when the bees returned, they were able to find the nest, apparently based on the awning pattern. 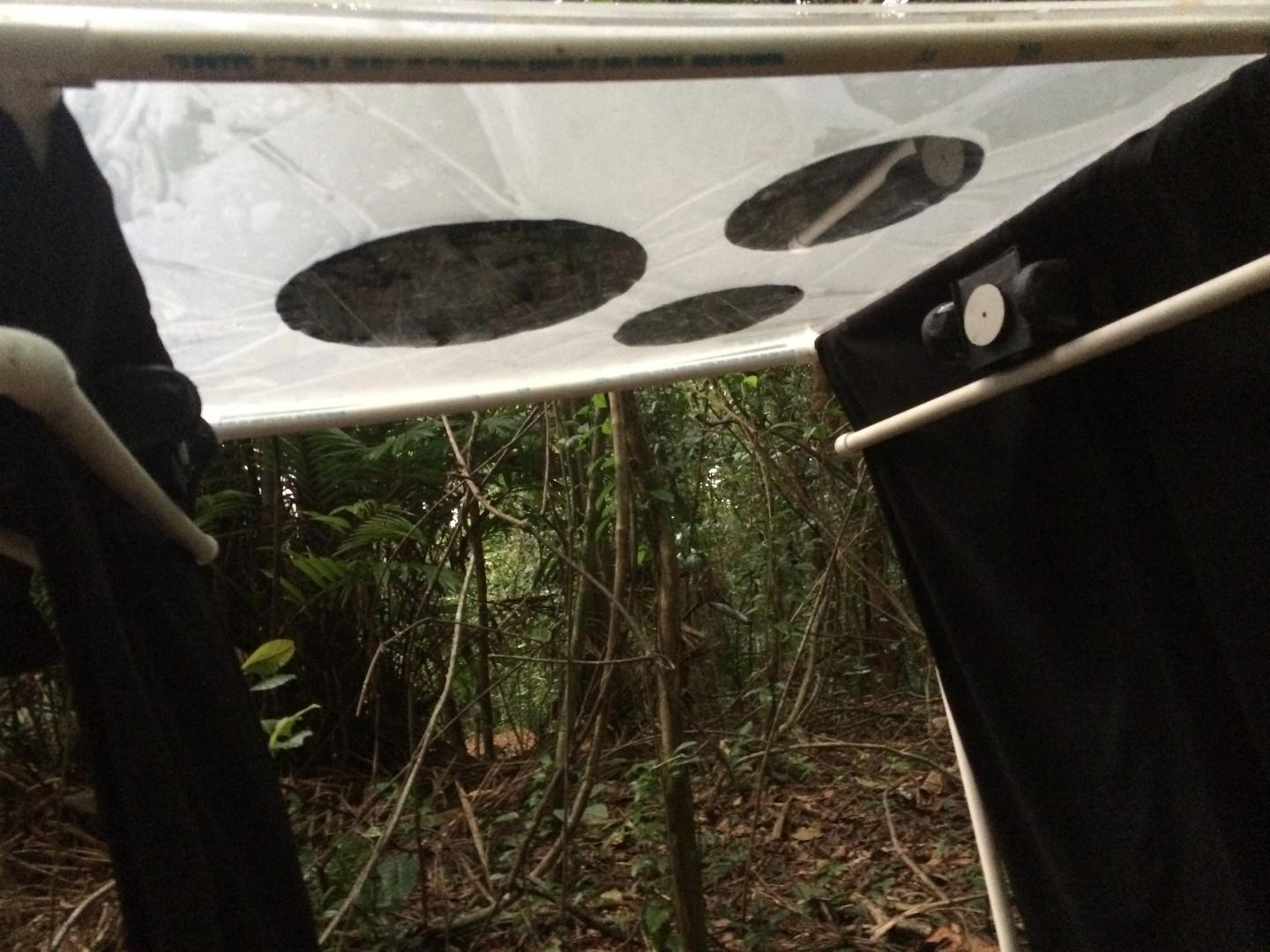 This powerful experiment showed that when researchers changed the orientation of a roof panel-canopy pattern, the bees chose the wrong nest.

Newswise — People--who get lost easily in the extraordinary darkness of a tropical forest--have much to learn from a bee that can find its way home in conditions 10 times dimmer than starlight. Researchers at the Smithsonian Tropical Research Institute's (STRI) research station on Barro Colorado Island in Panama and the University of Lund in Sweden reveal that sweat bees (Megalopta genalis), find their way home based on patterns in the canopy overhead using dorsal vision. This first report of dorsal navigation in a flying insect, published in Current Biology, may be of special interest to makers of drones and other night-flying vehicles.

"One of the pioneers of studies on homing behaviors in bees was Charles H. Turner, an African-American scientist from the University of Chicago," said William Wcislo, staff scientist at STRI, "He wrote in the Biological Bulletin in 1908: 'burrowing-bees use memory in finding the way home, and that they examine carefully the neighborhood of the nest, for the purpose of forming memory pictures of the topographical environment of the burrow.' But what we didn't understand until now, was that the cues that the bees are memorizing are overhead, as well as in front of their faces."

No one knows why the sweat bees on Barro Colorado Island prowl from flower to flower like crepuscular cats, gathering pollen only for about 70 minutes before sunrise and after sunset. Especially because it is 100 times darker on the tropical forest floor where the bees live inside dead twigs and vines, than above the forest canopy.

Since the late 1990's Eric Warrant and his team from the Vision Group at the University of Lund in Sweden has collaborated with Wcislo to learn more about Megalopta's optical superpowers. Their work showed that Megalopta's special compound eyes are 30 times more sensitive to light and concentrate photons of light in a way day-flying honeybee eyes cannot. By identifying pollen from the bees' bodies and their nests, they discovered that the bees gather pollen from more than 60 plant species: tall canopy trees like Hura crepitans, and Pseudobombax septenatum, to understory shrubs in the coffee family like Faramea occidentalis.

"For a human observer, the most obvious visual cues in the forest at night are gaps in the canopy when we look straight up because the sky is much brighter than the forest below," Warrant said, "We see a quite complex pattern of criss-crossing branches, but the bees'-eye-view is much less complex. They see broad blobs of light that vary in shape and position. We knew that ants could use canopy patterns to navigate as they walk through the forest, and we wondered if maybe bees were doing the same thing."

Honeybees can't do this, but to find out if Megalopta bees had yet another superpower, Sandra Chaib, a student at the University of Lund, moved to Barro Colorado Island to do the experiments.

To test this idea, Sandra first set up a special bee motel. Imagine the entrances to five rooms: each entrance is an identical, circular grey disc. The door is a tiny round opening at the center of the disc--the end of a stick nest.

Next, she made it a bit more complicated by building a sort of awning--like the roof of a carport--above each nest entrance. Over the four empty nests she placed an awning with a pattern of black and white bars, and over the occupied nest, a different pattern. Again, when the bees went out, she changed the position of the nest, and again, they found the right nest when they came back. But she still had not ruled out the possibility that the bees were using another clue, like smell, to find their own nest. So she left the nest in the same place, but put the bee's learned pattern over an empty nest...and the bees chose the empty nest, showing that they were using the pattern as a guide, not smell or some other signal from the nest.

Her final experiment was the most elegant: this time two nests shared a common awning, a design of dark circles on a light background made to represent the patterns of light and dark in real forest canopies. The entrance to an empty nest was located under one end of the awning, and the entrance to the occupied nest under the opposite end. This time, when the bees left, Sandra flipped the awning around so that the pattern was reversed. The bees chose the wrong nest more than 80 percent of the time, showing once and for all that they were navigating based on the pattern above.

Understanding how Megalopta navigates may be of interest for military applications. Now, most drones use GPS to navigate, but GPS and satellites can be jammed or destroyed.

"Animals use a variety of different cues to navigate. Vision is obviously a very important one, but many animals have a magnetic sense and can measure properties of the Earth's magnetic field to work out where they are on the surface of the Earth and the direction they want to travel. We have already learned about insects and other animals that are able to use the stars for navigation; pigeons are able to use odors for navigation...there are lots of different cues. The canopy is one cue that a drone can use to navigate, but a really robust navigational system will be one that will use a number of different cues, like animals have, to use all of these systems at once to navigate."

STRI Facilities are still closed due to COVID-19 restrictions but researchers are itching to get back out "So far we only know how the bees identify which room in the bee motel is theirs when they come home," Wcislo said. "We still have no idea how they navigate through the forest after they leave their nests."

A version of this study was made available online in March 2021 ahead of final publication in the print issue on August 23, 2021.

Caption: Megalopta genalis, a sweat bee, is able to see in very low light conditions. This study of M. genalis is the first report of the use of dorsal navigation by a flying insect.

Caption: The entrances to bee nests were lined up under this awning showing different patterns. When the bees left a nest to forage, researchers switched the order of the nests, and when the bees returned, they were able to find the nest, apparently based on the awning pattern.

Caption: This powerful experiment showed that when researchers changed the orientation of a roof panel-canopy pattern, the bees chose the wrong nest.