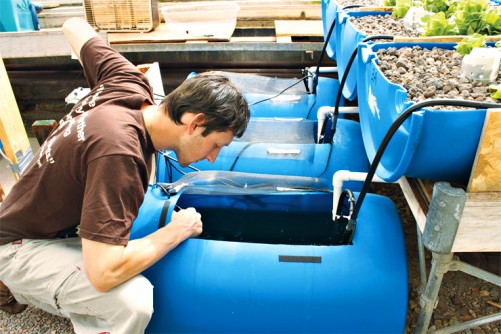 SUNY-ESF graduate student Michael Amadori checks on the tilapia he is growing as part of his aquaponics experiment.

Newswise — A graduate student at the SUNY College of Environmental Science and Forestry (ESF) is conducting a first-of-its kind experiment in urban food production, using dried food waste to raise fish and using the fish waste to nourish an ever-growing crop of Boston Bibb lettuce.

“The idea is that you’re taking post-consumer food waste which, right now at best, you can compost,” said Michael Amadori, a master’s student in ecological engineering. “And you are growing fish, then you’re taking fish waste and you’re growing lettuce. You can bypass the composting process completely.

“The whole idea with aquaponics is sustainability,” he said. “You can grow fresh food in non-traditional areas, such as college campuses and the urban environment.”

Aquaponics — a practice that combines traditional aquaculture (the raising of fish) with hydroponics (growing vegetables without soil) — is not a new endeavor. But Amadori said this is the first time anyone has experimented with using post-consumer food waste to feed the fish.

If he’s successful, he will have found a way to reduce the amount of food that enters the waste stream while also devising a way to significantly lower the cost of growing fish commercially.

“Not only is Michael investigating the nutrient and energy flows in this system, he is designing a system that can be scaled up for use in small communities that have suffered economic hardship from the loss of manufacturing jobs, such as paper mill closures in the northeastern United States,” said Douglas J. Daley, director of the ESF-based SUNY Center for Brownfield Studies and Amadori’s major professor.

Amadori’s experiment is set up in a greenhouse on the ESF campus in Syracuse, N.Y. Six 55-gallon plastic barrels serve as tanks that each hold 20 young tilapia. In the early weeks of Amadori’s work, the 120 fish together weighed less than a pound. When his experiment is complete in approximately a year, he expects them to attain commercial weight of one pound each. The food waste is obtained from the dining center at Sadler Hall, a residence hall at neighboring Syracuse University.

He puts the food waste through a food grinder, dries it in an oven and breaks it into tiny pellets.

Fish in three of the tanks are fed the homemade pellets. The fish in the other three barrels eat commercial fish food so Amadori can compare the differences between the two populations.

Temperature-controlled water from the fish tanks is pumped into plastic containers in which rows of Boston Bibb lettuce grow in beds of gravel. There is no soil. The lettuce absorbs the nutrients from the fish waste and the water is cycled back into the tanks. The process continues around the clock.

Amadori said he is using tilapia because they are hardy enough to withstand changes in pH and temperature and because the mild-tasting fish have emerged as a popular menu item in the last few years. He said the tilapia grown at fish farms is typically fed with fish that are harvested in the ocean and processed into commercial fish food.“It’s extremely unsustainable,” he said.

“We can close the loop with this process,” Amadori said. “One thing we have plenty of in an urban environment is food waste.”