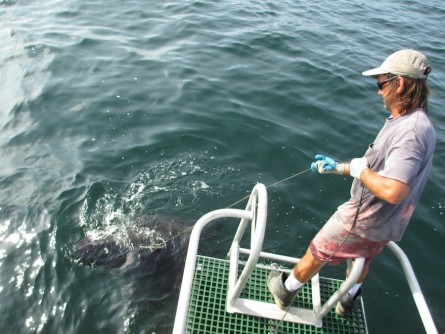 Dean Grubbs, RV Apalachee chief scientist and associate director of Florida State University Coastal & Marine Laboratory research, sizes up a 12-foot-long Greenland shark on the Apalachee’s first extended voyage. The capture of the Greenland shark is the first documented in the Gulf of Mexico.

Newswise — TALLAHASSEE, Fla. ⎯ A Florida State University research ship has returned from its first extended voyage, collecting more than 400 fishes in the northeastern portion of the Gulf of Mexico in an effort to study the effects of the Deepwater Horizon oil spill on marine life.

The highlight of the RV Apalachee’s trip was the first documented Gulf catch of a Greenland shark, a cold-water shark typically found in Arctic waters.

“No one has ever caught one in the Gulf of Mexico,” said Dean Grubbs, RV Apalachee chief scientist and associate director of Florida State University Coastal & Marine Laboratory research.

After a choppy start through rough water that left a few crew members seasick, Florida State’s cutting-edge research vessel proved to be a stable platform during the seven-day expedition, Grubbs said.

Their mission was to study deep sea marine communities and examine these animals for exposure to toxins. Tissues and other samples were collected to determine if these animals are metabolizing toxins to which they may have been exposed as a result of exposure to oil and other pollutants during the 2010 oil spill.

Grubbs and his crew logged more than 1,750 miles and caught 31 species of bony fish and 13 species of shark. The bony fishes ranged from the 3-inch-long snail fish to the 8-foot-long snake eel and sharks ranged from 12-inch catsharks to the 12-foot-long Greenland shark.

More than 20 measurements and samples were taken from each animal. The samples will be used in a variety of studies of taxonomic relationships, reproductive systems, life-history patterns, food webs and diets, mercury bioaccumulation and toxicology.

This sleeper shark was captured on a baited longline nearly 6,000 feet deep and only 15 miles from the site of the Deepwater Horizon blowout. The water temperature there was 4.12 degrees Celsius, or 39.4 degrees Fahrenheit, comparable to temperatures that Greenland sharks are used to in shallow waters in Canada, Grubbs said.

Genetic samples of the 12-foot-long juvenile female shark have been sent to colleagues at the University of Windsor in Canada, who are studying the global population structure of Greenland sharks, for genetic verification.

Grubbs and the researchers also collected samples of bile from the gall bladder, liver tissue and blood to examine potential exposure to toxins associated with the oil spill.

Grubbs noted that although his team pulled off the first documented capture of a Greenland shark in the Gulf of Mexico, video footage from 2001 indicated the presence of an unconfirmed species of sleeper shark in the Gulf. A remotely operated vehicle inspecting oil and gas prospecting structures recorded a large shark believed to be a Greenland shark off the Texas coast.