The sport of parahawking, or paragliding in partnership with a bird of prey, is an opportunity to experience flying like a bird. And the Torrey Pines Gliderport in La Jolla is one of the only places in the world where the public can don a harness, jump off a seaside cliff and soar with a raptor. 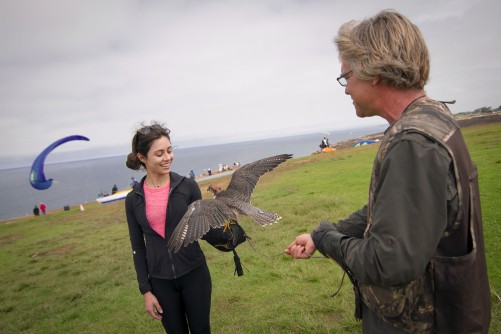 David Metzgar—a biologist, paragliding pilot and conservation educator—is eager to connect people with native birds of prey, both on land and in the sky.

Newswise — The sport of parahawking, or paragliding in partnership with a bird of prey, is an opportunity to experience flying like a bird. And the Torrey Pines Gliderport in La Jolla, Calif. is one of the only places in the world where the public can don a harness, jump off a seaside cliff and soar with a raptor.

David Metzgar—a biologist, paragliding pilot and conservation educator—is eager to connect people with native birds of prey, both on land and in the sky. He co-founded Total Raptor Experience in 2013 with his wife, Antonella Zampolli, and business partner Terry Lockwood. Together they host weekly interactive educational programs with hawks, falcons and owls.

“Growing up as a free flight pilot, I always appreciated soaring birds and raptors,” said Metzgar. “Yet, I didn’t realize you could train them, that the sport of falconry even existed, until I was in Nepal 15 years ago and was taught to fly with soaring birds by Scott Mason, who is really the pioneer of parahawking.”

Metzgar has spent his whole life studying nature, animals and microorganisms. After earning a doctorate degree in biology from the University of California San Diego in 2001, he worked as an epidemiologist for the U.S. Navy developing molecular diagnostics for infectious diseases. Though he still works part-time in the diagnostics industry, he dedicates the majority of his energy to Total Raptor Experience.

“The greatest part of my job is spending time with the birds and watching them fly,” said Metzgar. “As a pilot, I greatly experience their flying skill. Honestly, I would rather watch them fly from the ground than fly myself.”

Five years ago, Metzgar began training his falcon, Bunco, to fly alongside him. A Lanner falcon, these birds are known to be among the best pilots on the planet. Their tightly packed feathers are designed for aerodynamic flight, enabling them to sweep in on prey unnoticed at up to 90 mph from heights as great as 2,000 feet. It can take years to train a bird to fly freely and return—Metzgar uses a whistle or even calls Bunco affectionately by name—as well as become accustomed to crowded environments.

And Torrey Pines Gliderport is nearly always bustling, with colorful parachutes gliding this way and that along the alluring coastline. The invariably smooth wind conditions, which drive westward and produce consistent lift for gliders, has made the iconic cliffs a magnet for free flight pilots for over a century—including Charles Lindbergh, who set a gliding distance record there in 1930.

“The experience of free flight feels to me like I am a bird; parahawking even more so, because I’m flying next to a soaring bird, and I really feel like we are at one” explained Metzgar. “It feels like I was born to fly.”

In fact, gliders learn from birds how to more effectively find and navigate within thermals, or warm columns of air that rise up. In 2016, a team of physicists and biologists at UC San Diego found that migratory birds expertly detect and navigate these currents so that they can glide great distances without expending too much energy.

For those who prefer to keep their feet on the ground, the trio also conducts a falconry school that invites participants to engage in an up-close encounter with falcons and hawks. Lockwood—a master falconer and self-proclaimed “bird nerd”—begins the class by telling the tale of how the historic sport of training a bird of prey to catch wild quarry originated 4,000 years ago.

“Falconry is the oldest sport in history,” explains Lockwood, who cares for over 100 birds at her home in Ramona, Calif., where Total Raptor Experience is based. “Every time I practice falconry, I’m actually reliving history. There’s not a lot of change, other than in technology, because now we use telemetry to find the bird if it flies away.”

In the tutorial, each person is provided a left-handed leather glove and taught how to position their body in preparation for the hawk to land—left foot and shoulder pointed forward, keep your arm flat, don’t move the glove in front of your body. After forming a circle, a Harris hawk named Leath coasts gracefully from glove to glove, rewarded each time with a small piece of quail meat.

Other birds make their debut throughout the day, including a Eurasian eagle owl with hypnotizing orange eyes named Henson and a barn owl named Moonshine that likes to dance to music. Adults and children alike flock to the birds, eager to capture a photo and ask questions. Metzgar, Lockwood and Zampolli take the opportunity to provide conservation tips, such as refraining from using rat poison, avoiding lead sinkers when fishing, as well as posting UV tape on windows to help warn birds of glass.

“Our goal is to offer people up-close, exciting experiences with the birds—what it feels like to have the bird fly and land on the glove,” said Lockwood. “The educational experiences are used as a segue to introduce personal conservation measures so that they can care for the raptors and birds of prey in their own backyards.”