From Michigan to Beijing: An athletic trainer’s journey to Olympic hockey

He’s worked with the nation’s top talent in the sport for two decades. 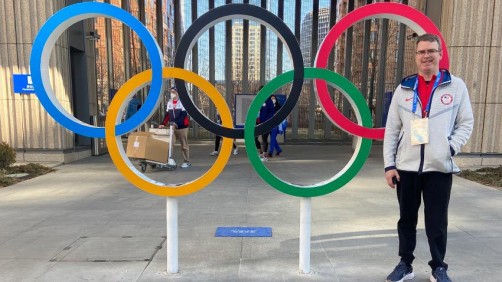 Hodges at the Winter Olympics in Beijing

Newswise — From his spot on the bench, Jason Hodges can see it all.

He notices if someone is skating differently in a practice, possibly an injury. He can see who needs to improve their conditioning. He knows what workouts and therapies each player needs to improve performance.

The veteran athletic trainer has managed all those tasks and more working with USA Hockey’s National Team Development Program, which grows the sport’s top young talent at its facility in Plymouth, Michigan.

For 24 years with a rink-side view, Jason Hodges has seen the future of American hockey.

“I’m fortunate enough to be here long enough where I can turn on any National Hockey League game and see at least one or more of the athletes on the ice that I’ve worked with and had a hand in getting them to the next level,” said Hodges, who is affiliated with MedSport, University of Michigan Health’s multidisciplinary sports medicine team led by orthopaedic surgeons. “Our under-18 team could have five or more first round draft picks this year. We have a bit of a hidden gem here in Plymouth.”

Hodges works with a team of six coaches, two trainers and two team doctors, both of whom are also faculty at University of Michigan Health.

Over 1,500 games, Hodges has provided services for several international competitions, including the International Ice Hockey Federation World Junior Championship. But last February, he received an invitation to join USA Hockey for the 2022 Winter Olympics in Beijing as one of their athletic trainers – his first time getting the call.

“It’s the ultimate stage,” Hodges said. “I had some athletes that competed at the Olympics that came through the program, so I had some familiarity. And originally, the NHL players were supposed to play in this event, but they backed out at the last minute. So, these athletes were kind of thrown in there, and they were really honored to be there. It made it even better to support them and help them with their dream of becoming an Olympian.”

The environment was not only new to Hodges but the entire team and staff. Due to high COVID-19 transmission, spectators were limited, and athletes were kept in distinct bubbles. Despite added challenges, Hodges and the two other invited trainers helped athletes navigate the safety protocols and managed day-to-day injuries throughout the competition.

“Jason is an incredibly humble individual who often shies away from the spotlight while working with some of the most compelling elite hockey players,” said Rebecca Northway, M.D., a primary care sports medicine physician at University of Michigan Health and team physician at the USA Hockey National Team Development Program. “His dedication to player development and safety has been even more evident during the COVID pandemic, where he has been an integral part of development of COVID protocols, player wellness and safety, and continuing the game as safely as possible. I can’t think of anyone better than Jason to have represented Team USA, working with many of the players he had previously worked with in USA Hockey in their younger years.”

Finland went on to win the gold medal, edging out the Russian Olympic Committee and Slovakia on the podium. Though Team USA lost to Slovakia in a tight quarterfinal match, the squad of mostly college athletes finished first overall in group play, defeating rival Canada 4-2.

“Our endgame wasn’t where we wanted to be, but any chance to beat Canada is a huge win,” Hodges said. “This was a great group of players and staff to work with, so seeing them have success, even if it wasn’t in a gold medal game, was great.”

Hodges returned to the states on Feb. 22, back to his typical schedule with the U-17 and U-18 squads in Plymouth.

While he’s thought about taking a different step in his career – the NHL, other professional teams – Hodges says he’s happy working with the young players in Plymouth.

“I really like this age group that I work with now, developing these young players into, ideally, professional athletes,” he said. “And this has afforded me the opportunity to travel to event all over the world with these teams. I’m really proud of what we do here.”