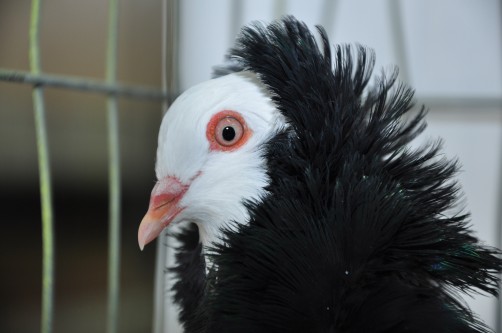 A rock pigeon of the breed old Dutch capuchine, which has a kind of head crest known as a mane. More than 80 breeds out of some 350 breeds of rock pigeon have head crests, which form when head and neck feathers grow upward instead of downward. Scientists from the University of Utah, BGI-Shenzen in China and other institutions decoded the genome or genetic blueprint of the rock pigeon, then found that a single gene mutation linked to the head crest trait. 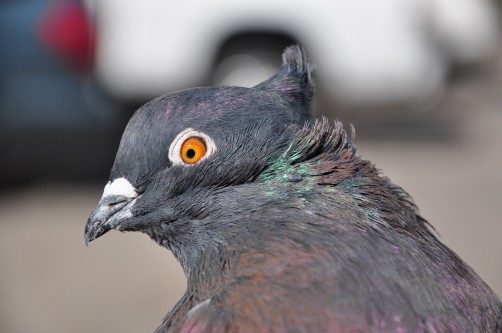 An Indian fantail – one of 350 rock pigeon breeds – displays a type of head crest known as a peak crest. Researchers from the University of Utah and from China, Denmark and Texas identified a single gene that, when mutated, apparently causes head crests to form in numerous pigeon breeds. It was part of a project that decoded the genetic blueprint of the rock pigeon, among Earth’s most common and diverse bird species. 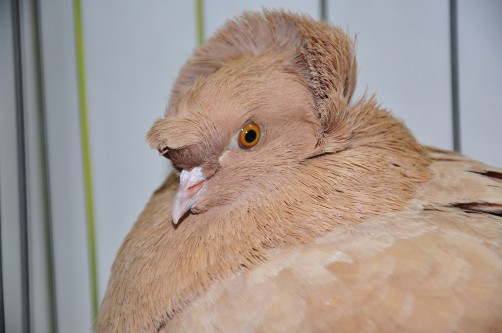 A kind of head ornamentation known as a shell crest is seen on this English trumpeter, one of some 350 breeds of rock pigeon, one of the most diverse bird species on Earth with breeds of various sizes, shapes, colors, color patterns, beaks and feather arrangements. A research team, led by the University of Utah and BGI-Shenzen in China, decoded the genome or genetic blueprint of the rock pigeon and used a new method to show that a single gene mutation appears to make head and neck feathers grow upward instead of downward to form head crests in numerous rock pigeon breeds. 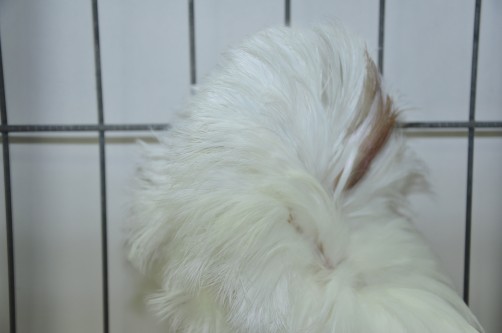 This head of a Jacobin, one of more than 350 breeds of rock pigeon, shows a rather extreme version of a kind of head crest known as a hood, which in this view hides the bird’s face. A team of scientists from the University of Utah and elsewhere report in the journal Science that they decoded the genome of the rock pigeon and found a single mutant gene is associated with the formation of head crests in numerous breeds.

“Birds are a huge part of life on Earth, and we know surprisingly little about their genetics,” especially compared with mammals and fish, says Michael D. Shapiro, one of the study’s two principal authors and an assistant professor of biology at the University of Utah. “There are more than 10,000 species of birds, yet we know very little about what makes them so diverse genetically and developmentally.”

He adds that in the new study, “we’ve shown a way forward to find the genetic basis of traits – the molecular mechanisms controlling animal diversity in pigeons. Using this approach, we expect to be able to do this for other traits in pigeons, and it can be applied to other birds and many other animals as well.” The study appears Jan. 31 on Science Express, the website of the journal Science. Shapiro led the research with Jun Wang of China’s BGI-Shenzhen (formerly Beijing Genomics Institute) and other scientists from BGI, the University of Utah, Denmark’s University of Copenhagen and the University of Texas M.D. Anderson Cancer Center in Houston. Key findings of the study of pigeons, which first were domesticated some 5,000 years ago in the Mediterranean region: -- The researchers sequenced the genome, or genetic blueprint, of the rock pigeon, Columba livia, among the most common and varied bird species on Earth. There are some 350 breeds with different sizes, shapes, colors, color patterns, beaks, bone structure, vocalizations and arrangements of feathers on the feet and head – including head crests that come in shapes known as hoods, manes, shells and peaks. The pigeon is among the few bird genomes sequenced so far, along with those of the chicken, turkey, zebra finch and a common parakeet known as a budgerigar or budgie, so “this will give us new insights into bird evolution,” Shapiro says.

-- Using innovative software developed by study co-author Mark Yandell, a University of Utah professor of human genetics, the scientists revealed that a single mutation in a gene named EphB2 causes head and neck feathers to grow upward instead of downward, creating head crests.

“This same gene in humans has been implicated as a contributor to Alzheimer’s disease as well as prostate cancer and possibly other cancers,” Shapiro says, noting that more than 80 of the 350 pigeon breeds have head crests, which play a role in attracting mates in many bird species. -- The researchers compared the pigeon genome to those of chickens, turkeys and zebra finches. “Despite 100 million years of evolution since these bird species diverged, their genomes are very similar,” Shapiro says. -- The study turned up more conclusive evidence that major pigeon breed groups originated in the Middle East, and that North American feral pigeons – which are free-living but not wild – are close relatives of racing pigeons, named racing homers.

A Genome for the Birds, a Gene for Head Crests The study assembled 1.1 billion base pairs of DNA in the rock pigeon genome, and the researchers believe there are about 1.3 billion total, compared with 3 billion base pairs in the human genome. The rock pigeon’s 17,300 genes compare with about 21,000 genes in people. The researchers first constructed a “reference genome” – a full genetic blueprint – from a male of the pigeon breed named the Danish tumbler. They did less complete sequencing of two feral pigeons and 38 other pigeons from 36 breeds. Shapiro says his team’s study is the first to pinpoint a gene mutation responsible for a pigeon trait, in this case, head crests. “A head crest is a series of feathers on the back of the head and neck that point up instead of down,” Shapiro says. “Some are small and pointed. Others look like a shell behind the head; some people think they look like mullets. They can be as extreme as an Elizabethan collar.” The study found strong evidence that the EphB2 (Ephrin receptor B2) gene acts like an on-off switch to create a head crest when mutant, and no head crest when normal. It also showed the mutation and related changes in nearby DNA are shared by all crested pigeons, so the trait evolved just once and was spread to numerous pigeon breeds by breeders. They ruled out the alternate possibility the mutation arose several times independently in different breeds. The researchers analyzed full or partial genetic sequences for 69 crested birds from 22 breeds, and 95 uncrested birds from 57 breeds. They found a perfect association between the mutant gene and the presence of head crests. “The way we tracked this trait was innovative,” Shapiro says. “We used gene-finding software from Mark Yandell’s group that was developed to find mutations that control human diseases. We adapted this software to find mutations that control interesting traits in pigeons. This should be extendable to other animals as well.” The scientists also showed that while the head crest trait becomes apparent in juvenile pigeons, the mutant gene affects pigeon embryos by reversing the direction of feather buds – from which feathers later grow – at a molecular level. Other genetic factors – not identified in the new study – determine what kind of head crest east pigeon develops: shell, peak, mane or hood, according to Shapiro.

Tracking the Origins of Pigeons A 2012 by Shapiro study provided limited evidence of pigeons’ origins in the Middle East and some breeds’ origins in India, and indicated kinship between common feral or free-living city pigeons and escaped racing pigeons. In the new study, “we included some different breeds that we didn’t include in the last analysis,” Shapiro says. “Some of those breeds only left the Middle East in the last few decades. They’ve probably been there for hundreds if not thousands of years. If we find that other breeds are closely related to them, then we can infer those other breeds probably also came from the Middle East. That’s what we did.” “We found that the owl breeds – which are pigeon breeds with very short beaks and that are very popular with breeders – likely came from the Middle East,” he says. “They are very closely related to breeds we know came from Syria, Lebanon and Egypt.” Shapiro says the study also “found a lot of shared genetic heritage between breeds from Iran and breeds we suspect are from India, consistent with historical records of trade routes between those regions. People were not only trading goods along those routes, but probably also interbreeding their pigeons.” As for the idea that free-living pigeons descended from escaped racing pigeons, Shapiro says his 2012 study was based on “relatively few genetic markers scattered throughout the genome. We now have stronger evidence based on 1.5 million markers, confirming the previous result with much better data.” The scientists analyzed partial genomes of two feral pigeons: one from a U.S. Interstate-15 overpass in the Salt Lake Valley, and the other from Lake Anna in Virginia. “Despite being separated by 1,000 miles, they are genetically very similar to each other and to the racing homer breed,” Shapiro says. He notes that pigeons were one of evolutionist Charles Darwin’s “favorite examples of how selection works. He used this striking example of artificial selection [by breeding] to communicate how natural selection works. Now we can get to the DNA-level changes that are responsible for some of the diversity that intrigued Darwin 150 years ago.”