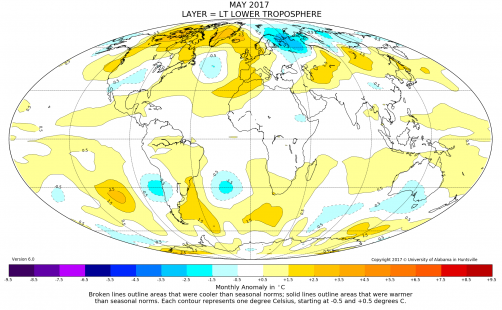 Global average temperatures rose steadily through May to levels similar to those seen last fall, when temperatures leveled off after the 2015-2016 El Niño Pacific Ocean warming event, according to Dr. John Christy, director of the Earth System Science Center at The University of Alabama in Huntsville.

Compared to seasonal norms, the coldest place on Earth in May was in the Komi Republic in northwestern Russia, near the town of Zimstan. Temperatures there averaged 3.47 C (about 6.25 degrees Fahrenheit) colder than seasonal norms.

Compared to seasonal norms, the warmest place on Earth in May was near the town of Cambridge Bay on the northwest passage in Nunavut Territory, Canada. Temperatures there averaged 3.47 C (about 6.25 degrees Fahrenheit) warmer than seasonal norms.