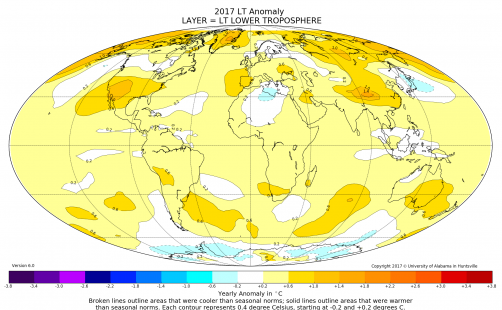 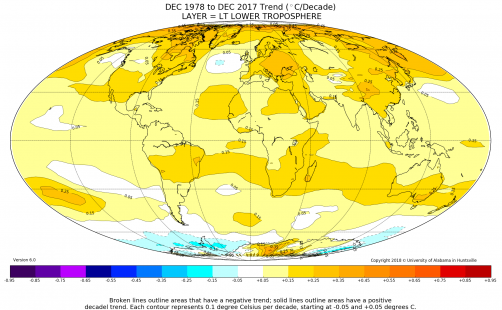 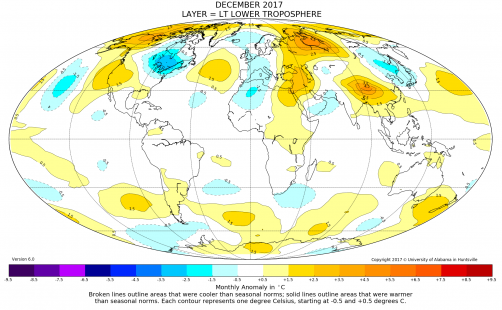 Globally averaged, 2017 was the third warmest year in the 39-year satellite temperature record, according to Dr. John Christy, director of the Earth System Science Center (ESSC) at The University of Alabama in Huntsville. The average temperature in the lower troposphere over the globe in 2017 was 0.375 C (about 0.67 degrees Fahrenheit) warmer than seasonal norms.

Since the satellite-based global temperature record began in November 1978, the fastest warming region on Earth has been around the North Pole. The troposphere over the Arctic Ocean has warmed at the rate of 0.28 C per decade, or more than twice the global rate of warming. By comparison, the Antarctic continent is warming at the rate of about 0.07 C per decade, while the air above the ocean around the Antarctic is cooling about 0.04 C per decade. (The satellite instruments that collect temperature data do not see all the way to the poles. The satellite orbits miss about the top five degrees latitude in both the Arctic and the Antarctic.)

The continental U.S. (both contiguous 48 and the continental 49) have been warming at the rate of about 0.18 C (about 0.32 degrees F) per decade. That means that in the 39 years since satellite instruments started collecting atmospheric temperature data, the air temperature above the U.S. has warmed an average of about 1.25 degrees Fahrenheit.

Compared to seasonal norms, the coldest spot on the globe in December was near Timmins, in eastern Ontario. Temperatures there were 3.51 C (about 6.32 degrees Fahrenheit) cooler than seasonal norms.

Compared to seasonal norms, the warmest place on Earth in December was near Qambo, in the Eastern Tibet autonomous region of China. Tropospheric temperatures there averaged 5.27 C (about 9.49 degrees Fahrenheit) warmer than seasonal norms.

Christy and Dr. Richard McNider, a professor emeritus at UAH, recently published in the Asia-Pacific Journal of Atmospheric Sciences a study that mathematically removed from the satellite temperature record the effects of volcanic eruptions and of El Nino and La Nina Pacific Ocean heating and cooling events. This was done in an attempt to identify that part of the overall warming during the 39-year period that might be attributed to human influences. The 0.155 C per decade trend reported in that study differs from the 0.13 C per decade trend reported here in the Global Temperature Report. That is because this most recent research in the APJAS was done using an earlier version of the satellite microwave sounding unit dataset. That dataset was revised and updated, and the revisions published (Spencer et al., APJAS 2017) while the research looking at the effects of natural climatic events was under peer review.