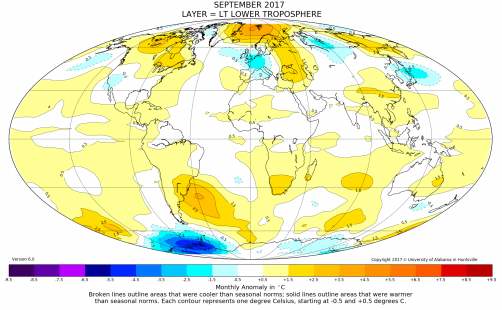 Boosted by warmer than normal water in the equatorial eastern Pacific Ocean that peaked in June and July, global average temperatures in the atmosphere rose to record levels in September, according to Dr. John Christy, director of the Earth System Science Center at The University of Alabama in Huntsville. Not only was it the warmest September on record, it was also the warmest month (compared to seasonal norms) in the 38-year satellite temperature record that wasn’t associated with an “officially recognized” El Niño Pacific Ocean warming event.

In the past two months, however, sea surface temperatures in that critical central Pacific region have fallen significantly; so much so that what had been a forecast for an upcoming El Niño warming event has transitioned into a forecast for a possible La Niña Pacific Ocean cooling event. (See attached graph.)

“Based on what we saw during past events, we would expect some atmospheric cooling in the coming months,” Christy said.

Cooling is more passive, while warming is active, so that transition might take a bit longer than the warming did.

“Cooling is a bit more muted,” Christy said. “It might take a few months for the cooling to filter in.”

Compared to seasonal norms, the coldest spot on the globe in September was in the Western Antarctic, near Alexander Island. Temperatures there were 5.65 C (about 10.17 degrees Fahrenheit) cooler than seasonal norms.

Compared to seasonal norms, the warmest place on Earth in September was the Norwegian archipelago of Svalbard in the Arctic Ocean. Temperatures there averaged 4.64 C (about 8.35 degrees Fahrenheit) warmer than seasonal norms.