27-Jul-2017 10:05 AM EDT, by Perelman School of Medicine at the University of Pennsylvania contact patient services
favorite_border 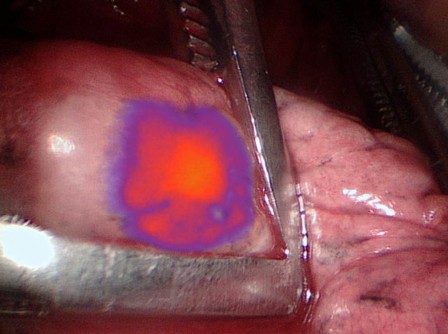 Newswise — PHILADELPHIA – Surgeons were able to identify and remove a greater number of cancerous nodules from lung cancer patients when combining intraoperative molecular imaging (IMI) – through the use of a contrast agent that makes tumor cells glow during surgery – with preoperative positron emission tomography (PET) scans. The study from the Abramson Cancer Center at the University of Pennsylvania (ACC) is the first to show how effective the combination of IMI with the tumor-glowing agent can be when combined with traditional PET imaging. Researchers published their findings today in Annals of Surgery.

“Surgically removing tumors still leads to the best outcomes in cancer patients, and this study shows intraoperative molecular imaging can improve the surgeries themselves,” said the study’s lead author Jarrod D. Predina, MD, MS, a post-doctoral research fellow in the Thoracic Surgery Research Laboratory and the ACC’s Center for Precision Surgery. “The more we can improve surgeries, the better the outcomes for these patients will be.”

Pulmonary nodules are small growths in the lung. Doctors discover them in about 250,000 Americans each year. In 80,000 of those patients, the nodules are suspicious enough to warrant surgery. PET scans are standard before these procedures, and studies have shown they can detect malignancies in the nodules 90 percent of the time. But research has also shown these scans have limitations. They can’t usually show tumors smaller than a centimeter. They also can’t distinguish between cancerous growths and benign inflammatory diseases like infections. And importantly, scans taken before surgery don’t give surgeons real-time guidance once the procedure begins.

In order to get live imaging during surgery, Penn researchers used a near-infrared contrast agent called OTL38 that makes tumor cells glow. In past studies, they’ve shown it can detect malignant nodules as small as three millimeters – roughly one-third of the length of a shirt button.

For this study, they combined PET imaging and IMI for 50 patients having surgery to remove lung nodules. All of the patients underwent a pre-operative PET scan within 30 days of their procedure. These scans identified a total of 66 nodules.

During the operation, IMI identified 60 of the 66 previously known nodules, or 91 percent. In addition, doctors used IMI to identify nine additional nodules that were undetected by the PET scan or by traditional intraoperative monitoring.

IMI further improved diagnostics in 30 percent of the patients evaluated with this approach. In about 10 percent of patients, IMI helped surgeons find cancer that would have otherwise been missed by standard imaging like CT or PET.

“This shows the contrast agent is allowing us to remove more cancer from the patient than we would have with PET imaging alone,” said the study’s senior author Sunil Singhal, MD, the William Maul Measey Associate Professor in Surgical Research and director of the ACC’s Center for Precision Surgery.

Singhal is quick to point out that this study does not devalue the role of PET scans.

“PET imaging still has an important role to play in developing treatment plans for patients, but given its limitations, it’s clear that IMI with this contrast agent can improve the picture surgeons are seeing,” Singhal said. “That’s especially true when you’re talking about nodules that are only a centimeter or smaller.”

Researchers also say this study lays the groundwork for future research involving OTL38. They’re currently evaluating this technology in a formal, multi-center trial that will be the first Phase II study of molecular imaging in the United States. They’re also exploring the effectiveness of additional contrast agents, some of which they expect to be available in clinic within a few months. They will also keep track of these patients to find out if these improved surgeries help patients live longer. These cancers also come back within five years in 25 to 30 percent of cases, so they hope to show these procedures lower that recurrence rate.

The study was supported by the American Philosophical Society, the National Institutes of Health (1F32CA210409, R01 CA193556), and the Association for Academic Surgery Foundation.

Editor’s Note: OTL38 was provided by OnTargetLaboratories, which manufactures the agent.