Study shows why glucose levels are reduced in the brains of children with E. coli K1 meningitis 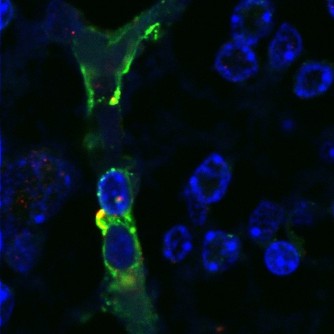 Newswise — Escherichia coli K1 (E. coli K1) continues to be a major threat to the health of young infants. Affecting the central nervous system, it causes neonatal meningitis by multiplying in immune cells, such as macrophages, and then disseminating into the bloodstream to subsequently invade the blood-brain barrier. Neonatal and childhood meningitis in particular results in long-term neurological problems such as seizures or ADHD in up to half of the survivors.

Meningitis can be caused by bacterial, fungal or viral pathogens. One hallmark of bacterial meningitis is reduced glucose levels in the cerebrospinal fluid (CSF) of patients, which allows a physician to quickly begin appropriate antibiotic treatment.

The reason for the reduced glucose levels associated with bacterial meningitis was believed to be the need for glucose as fuel by infiltrating immune cells in response to infection. However, the possibility that the bacteria itself could manipulate glucose concentrations in the brain had not been explored before now.

Scientists at The Saban Research Institute of Children’s Hospital Los Angeles (CHLA) report that glucose transporters, which transfer glucose from the blood to the brain, are inhibited by E. coli K1 during meningitis.

“We found that expression of glucose transporters is completely shut down by bacteria, leaving insufficient fuel for the immune cells to fight off the infection,” said the study’s first author, Subramanian Krishnan, PhD, of the Division of Infectious Diseases at CHLA.

Specifically, the study – reported online in The Journal of Infectious Diseases – shows that E. coli K1 modulates the protein peroxisome proliferator-activated receptor-gamma (PPAR-γ) and glucose transporter-1 (GLUT-1) levels at the blood-brain barrier in human brain microvascular endothelial cells. This causes inhibition of glucose uptake and the disruption of the blood-brain barrier integrity.

The suppression of PPAR-γ and GLUT-1 levels in mouse models of bacterial meningitis caused extensive neurological effects. The researchers showed that a two-day treatment regimen with partial or selective PPAR-γ agonists (Telmisartan and Rosiglitazone – both FDA-approved drugs) ameliorated the pathological outcomes of infection in mice by inducing expression of glucose transporters.

“Modulation of PPAR-γ and GLUT-1 levels may boost the immune system to fight infection,” said principal investigator Prasadarao V. Nemani, PhD of CHLA and the Keck School of Medicine of the University of Southern California. “Our findings could lead to a novel way of treating children with meningitis and reducing long-term neurological problems.”

Additional contributors to the study include Alexander C. Chang, PhD of CHLA and Professor Brian M. Stoltz of the California Institute of Technology. This work was supported by funds from NIAID (AI40567) and NICHD (NS73115).