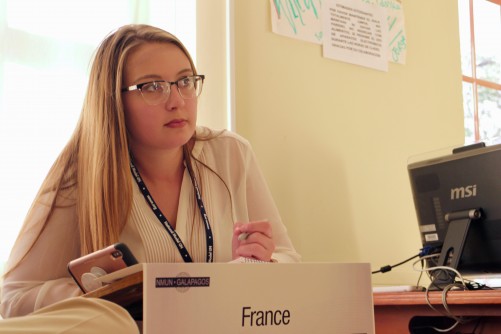 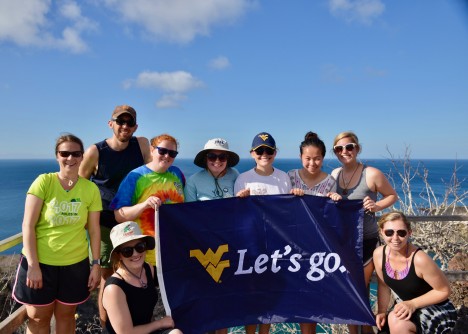 Earlier this year, eight West Virginia University students found themselves on top of an inactive volcano in the Galapagos Islands, wielding machetes to remove an invasive species that was endangering the cacao plant growing on the volcano. The students, all members of WVU’s Model United Nations student organization, traveled to the island January 5-14 to compete at Model UN’s annual international conference.

“We debate and learn about these things, but it’s different to put them into action,” said Garrett Burgess, president of the student organization and a senior studying political science and world languages, literature and linguistics. “I got to wield a machete and chop down some evasive plants, which was a lot of fun.”

The theme of this year’s conference was climate change.

“To be in the place where climate change directly affects via evasive species and through changes in sea levels, and to have a conference on the subject where it’s being visually impacted by climate change, was an amazing experience,” Burgess said.

The students traveled to the Galapagos Islands with Clarissa Estep, director of the international studies program and associate professor in the Department of Political Science.

“Model UN is a fun, hands on learning activity that promotes long-term skills such as public speaking, leadership, and conflict resolutions,” Estep said. “This was a wonderful way to begin the spring semester – at a Model UN conference on climate change in the Galapagos Islands.”

During the conference, six of the WVU students represented France on various committees and received a Distinguished Delegation Award, which was awarded to only three universities of the almost 30 in attendance.

Torey Siebart, a senior international studies major, was one of two WVU students to represent Sweden. She received an award for her position paper, which detailed the results of her research and her position on the topic.

“Universities that are our biggest competition also received the Distinguished Delegation Award, so it was relieving to be on the same level,” said Emma Harrison, a junior studying political science and multidisciplinary studies. “We were glad to be at pace with the people we consider to be our major competition.”

“I was able to take what I have seen through studying abroad in France and apply what I learned there to this conference,” Harrison said.

“Model United Nations is an opportunity for students to simulate the United Nations’ system of committees to work cooperatively with students from all over the world to solve some of the world’s greatest problems,” said Morgan King said, a senior civil and environmental engineering major with a minor in political science and is interested in the connection between science, technology and policy.

The students began preparing for the conference seven months before departing, which included fundraising, a crowdfunding campaign and researching their assigned countries and chosen committees.

The crowdfunding campaign through the Eberly College of Arts and Sciences and WVU Foundation helped raise nearly $800 to support the organization’s travel costs for the conference.

“Study abroad has been one of the most rewarding and educational experiences in my WVU career,” King said. “The crowdfunding campaign itself allowed us to do that more easily and made the program more accessible to all students involved.”

To support other similar initiatives in the Eberly College of Arts and Sciences, visit give.wvu.edu/eberly.