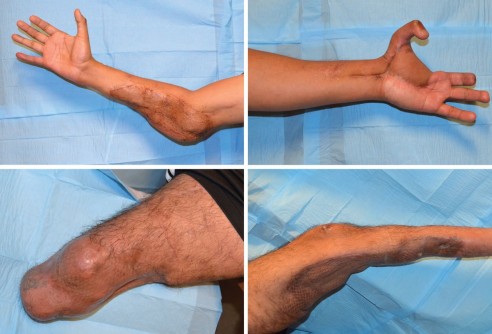 Newswise — July 29, 2014 – For survivors of severe combat injuries threatening more than one limb, reconstructive surgical procedures using tissue flaps have a good record of safety and effectiveness in avoiding amputation, reports a paper in the August issue of Plastic and Reconstructive Surgery®, the official medical journal of the American Society of Plastic Surgeons (ASPS).

From 2003 through 2012, a total of 359 limb salvage procedures were performed at the National Capital Consortium. Of these, 48 procedures involved attempts to salvage two or more injured limbs. "Critical to each of the cases presented in our series was maintenance of residual limb length and a functioning joint (wrist joint and knee joint)," Dr. Valerio and colleagues write.

The limb salvage procedures were performed an average of about one month after initial injury. About 90 percent of patients were injured by blasts from improvised explosive devices; about 60 percent of the threatened limbs were lower extremities (leg to foot). Injuries were more severe in the multiple-extremity salvage group, based on a standard scoring system.

With Improvements in Survival, Need for Advanced ReconstructionThe overall flap success rate was about 90 percent in both groups. Long-term amputation rates were similar as well. Complications related to one type of tissue flap (free flaps) were higher in the multiple limb-salvage group.

Advances in forward surgical care have increased the survivability of severe blast-related combat injuries. "The conflicts in Iraq and Afghanistan have highlighted a unique group of patients surviving multiple extremity war injuries complicated by open fractures requiring complex reconstruction," according to Dr. Valerio and coauthors.

The new study is one of the first to focus on the outcomes of limb-salvage procedures in these severely injured patients. For patients who may have already lost one or more limbs, preservation of the remaining limbs is "even more critical" to facilitate early ambulation (walking) as well as potentially optimizing rehabilitation and related activities of daily living goals after reconstruction, the authors note.

"Our experience supports limb salvage in the multiple extremity injured patients with avoidance of higher limb amputation levels, despite a higher injury severity score." Dr. Valerio and coauthors conclude. They hope their experience will contribute to further improving the outcomes of surgical reconstruction—and thus long-term rehabilitation and functioning—for survivors of severe and limb-threatening combat injuries.

About ASPS The American Society of Plastic Surgeons (ASPS) is the world's largest organization of board-certified plastic surgeons. Representing more than 7,000 Member Surgeons, the Society is recognized as a leading authority and information source on aesthetic and reconstructive plastic surgery. ASPS comprises more than 94 percent of all board-certified plastic surgeons in the United States. Founded in 1931, the Society represents physicians certified by The American Board of Plastic Surgery or The Royal College of Physicians and Surgeons of Canada. ASPS advances quality care to plastic surgery patients by encouraging high standards of training, ethics, physician practice and research in plastic surgery. You can learn more and visit the American Society of Plastic Surgeons at www.plasticsurgery.org or www.facebook.com/PlasticSurgeryASPS and www.twitter.com/ASPS_news.