by Phoebe Edwards, University of Toronto 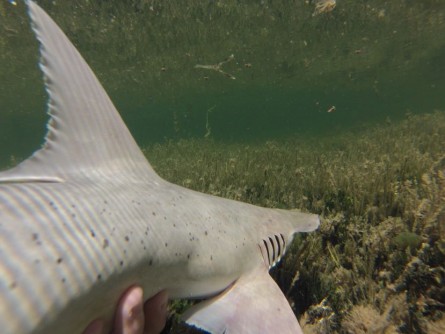 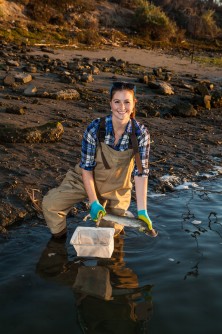 Newswise — Sharks are commonly thought of as apex predators of the sea; bloodthirsty and highly evolved for carnivory. However, new research is revealing that at least one species of shark eats seagrass and has adaptations in its digestive system to process vegetation.

The first evidence for these plant-eating sharks came from an unusual discovery published in 2007. Dana Bethea and collaborators examined the stomach contents of bonnethead sharks in the Gulf of Mexico, and were surprised to find that more than half of the material they had ingested was seagrass. However, it was unclear if the sharks were actually consuming grass and extracting nutrients from it, or just accidentally swallowing it as they hunted for crabs and shrimp hiding in the vegetation. This work inspired Samantha Leigh, a PhD candidate at the University of California Irvine, to investigate the ability of bonnetheads to digest plants.

Leigh flew across the country in search of bonnethead sharks in their natural habitat. These small sharks, which grow to only 3 feet long, are abundant in the seagrass meadows of the Florida Keys. She captured several individuals and brought them into the laboratory at Florida International University, where they were fed a diet of 90% seagrass for several weeks. The seagrass had been labeled with stable isotope carbon-13, so when the sharks consumed it, she could test for a signature of carbon-13 in the sharks’ tissues and see if nutrients from the seagrass were actually taken up into the body. She also collected the shark’s feces, to see how much of the seagrass nutrients (such as carbohydrates, proteins, etc) was simply excreted undigested. Further, Leigh looked at digestive enzymes in the intestines of the bonnetheads, to see if they even have any ability to break down plant material. A purely carnivorous animal should have no mechanism to digest plants, but if the bonnetheads eat seagrass regularly, they should have enzymes for this purpose.

The results were conclusive: carbon-13 from the labeled seagrass was found in the shark’s blood, so they were fully digesting and incorporating nutrients from the grass into their bodies, not just excreting it as waste. Out of the total grass consumed, about half was actually digested and broken down by the gut, and half was excreted undigested.  “To put that in perspective” Leigh says, “that is very similar to the digestive efficiency of sea turtles, which are entirely herbivorous and feeding on the same grass.”

Leigh also found that the sharks had the digestive enzyme b-glucosidase in their guts, which breaks down cellulose, an important component of plant matter. This is the first finding of plant-specific digestive enzymes in sharks. On top of this, the bonnetheads seemed perfectly content on their 90% vegetarian diet. Leigh observed no negative health effects, and the sharks even gained weight during the study. While in the wild bonnetheads would likely eat less than 90% seagrass (the 2007 study found up to 60% seagrass in the stomach in some populations), the ability to thrive on such a high plant diet is further support for their ability to obtain nutrients from seagrass.

Leigh is now studying the bacteria in the gut of the sharks. Gut bacteria are an important part of digestion, and it is possible that the bacteria are the source of the b-glucosidase enzyme that allows the sharks to digest the plant matter. Only 3 species of sharks have had their gut microbiome communities analyzed so far, and bonnetheads, with their unusual and diverse diet, would provide an interesting and important comparison for other shark species.

Leigh speculates that these adaptations for omnivory may allow the bonnetheads to be generalists as opposed to strictly predators, giving them flexibility to consume both plants and protein. “We always think of sharks as these apex predators,” she says, “but here is this shark that is not really acting like an apex predator at all… but more like an omnivore.”

It is still unknown whether the sharks intentionally consume grass in the wild by grazing or if they ingest plants accidently and have adapted a digestive mechanism to take advantage of that. A greater concern is what may happen to bonnethead sharks if these seagrass meadows, which are currently threatened, are destroyed. While bonnetheads are not currently endangered, this research indicates seagrass is an important part of their diet, in addition to their habitat.

Sharks have always captured human imagination as fearsome predators of the deep. However, Leigh’s work changes our fundamental understanding of these creatures, showing that this ancient lineage still has significant surprises in store and our knowledge may only be scraping the surface.

The fieldwork for this research was funded by National Geographic. Samantha Leigh is part of Dr. Donovan German’s lab at UC Irvine and collaborating with Dr. Yannis Papastamatiou at Florida International University.