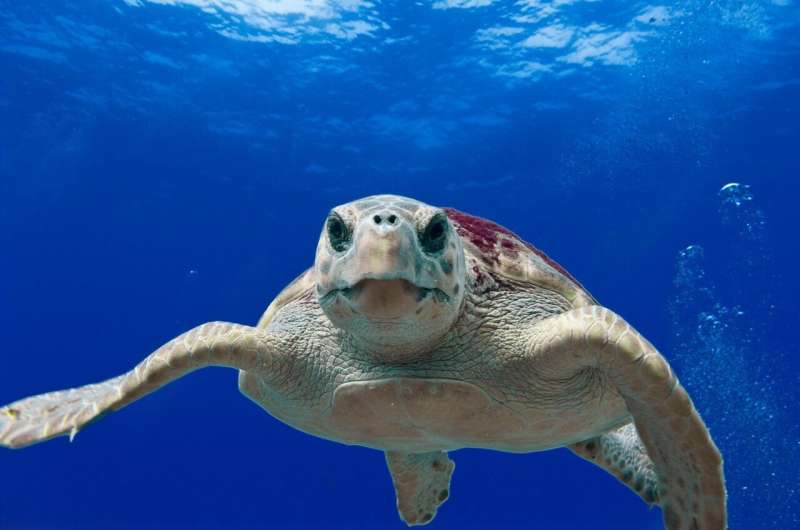 Newswise — Loggerhead sea turtles (Caretta caretta) are opportunistic carnivores that primarily feed on invertebrates and fish. In the wild, they eat a variety of food items depending on their life stage and geographic location. For debilitated sea turtles in rehabilitation, part of the healing process is to provide a species-specific, balanced diet that provides nutrition similar to that of a wild diet to allow injured, ill, malnourished and incapacitated turtles to gain weight and improve body condition. However, developing the right nutritionally balanced formula is challenging.

To find answers, a team of scientists led by Florida Atlantic University’s Harbor Branch Oceanographic Institute followed their “gut” instinct. They hypothesized that analyzing the stomach contents and clinical pathology data of wild loggerhead turtles would enable development of nutritional indices that could be applied to better address the dietary needs of captive loggerheads.

For the study, published in the Journal of Animal Physiology and Animal Nutrition, they examined the stomach contents of 153 deceased loggerheads that stranded in coastal Georgia. Stomach contents information was used to determine common local prey items, which were then evaluated for nutritional content. They also compared hematology and plasma biochemistry profiles (including proteins, trace minerals, and vitamins) between four cohorts of loggerhead turtles, including free-ranging subadults and adults, nesting females, and loggerheads undergoing rehabilitation at the Georgia Sea Turtle Center on Jekyll Island.

Comparisons from the study will enable scientists and clinicians to relate different life history stages to differences in blood health analytes, including several nutritional parameters not previously reported for loggerheads in this region. Results were also used to formulate a regionally specific, formulated diet for tube feeding, and a supplement containing vitamins and minerals for captive loggerheads, to more closely approximate the nutritional content of their natural diet. A vitamin/mineral supplement and a critical care diet were designed based on these data (Mazuri 5B48 Sea Turtle Supplement and Mazuri 5S94 Sea Turtle Meal Diet for Carnivorous Turtles).

“Data from our study can be used to enable caretakers to more closely approximate a ‘normal’ diet for captive loggerhead turtles, including providing vitamin and mineral supplementation when appropriate,” said Annie Page-Karjian, D.V.M., Ph.D., senior author, clinical veterinarian and an assistant research professor, FAU Harbor Branch. “Of course, understanding the current nutrient profile of diet items being fed is of critical importance as fish and other food items for aquatic species can vary dramatically with regards to micronutrient and macronutrient content.”

Seasonal effects were apparent in relative abundance of certain prey items, such as crabs in cooler months and bivalve mollusks in warmer months. Assessing the regional and temporal variability in loggerhead diets is an important component in their effective conservation because resultant data also can be used to help understand the impacts of environmental perturbations on benthic food webs.

“Results from our study support the hypothesis that loggerhead diet composition shifts and adapts over time to changing prey availability,” said Page-Karjian. “In turn, such fluctuations in the food web may be related to environmental shifts such as climate change and also to human activities such as trawl fishing, which alters the food web composition by removing benthic crustaceans along with bycatch, and dredging, a practice that totally destroys benthic habitats.”

Differences identified in the clinical pathology data from the study also highlight the need to develop baseline blood parameter reference intervals that are specific to the life history stage, which can be applied in a rehabilitation setting to help interpret clinical data for stranded loggerheads in various physiological states.