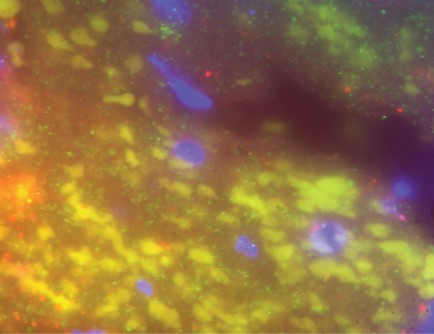 The blood clot, or thrombus, was extracted from a heart attack patient's cardiac artery and stained for MRP-14 and platelets. This slide image shows that platelets are loaded with MRP-14, and those appear as yellow areas.

Newswise — Right now, options are limited for preventing heart attacks. However, the day may come when treatments target the heart attack gene, myeloid related protein-14 (MRP-14, also known as S100A9) and defang its ability to produce heart attack-inducing blood clots, a process referred to as thrombosis.

Scientists at Case Western Reserve School of Medicine and University Hospitals Case Medical Center have reached a groundbreaking milestone toward this goal. They have studied humans and mice and discovered how MRP-14 generates dangerous clots that could trigger heart attack or stroke, and what happens by manipulating MRP-14. This study describes a previously unrecognized platelet-dependent pathway of thrombosis. The results of this research will appear in the April edition of The Journal for Clinical Investigation (JCI).

“This is exciting because we have now closed the loop of our original finding that MRP-14 is a heart attack gene,” said Daniel I. Simon, MD, the Herman K. Hellerstein Professor of Cardiovascular Research and Medicine at the School of Medicine and director of the University Hospitals Harrington Heart & Vascular Institute. “We now describe a whole new pathway that shows clotting platelets have MRP-14 inside them, that platelets secrete MRP-14 and that MRP-14 binds to a platelet receptor called CD36 to activate platelets.”

This translational research has moved back and forth from the cardiac catheterization laboratory investigating patients presenting with heart attack to the basic research lab probing mechanisms of disease. The clinical portion of this research yielded a visually stunning element—blood clots extracted from an occluded heart artery loaded with MRP-14 containing platelets.

“It is remarkable that this abundant platelet protein promoting thrombosis could have gone undetected until now,” Simon said.

In detailed studies using MRP-14-deficient mice, the investigators discovered MRP-14 in action. One key finding is that, while MRP-14 is required for pathologic blood clotting, it does not appear to be involved in the natural, primary hemostasis response to prevent bleeding.

“The practical significance of this research is that it may provide a new target to develop more effective and safer anti-thrombotic agents,” Simon said. Current anti-clotting drugs are subject to significant bleeding risk, which is associated with increased mortality.

About University HospitalsUniversity Hospitals, the second largest employer in Northeast Ohio, serves the needs of patients through an integrated network of hospitals, outpatient centers and primary care physicians in 16 counties. At the core of our health system is University Hospitals Case Medical Center, one of only 18 hospitals in the country to have been named to U.S. News & World Report’s most exclusive rankings list: the Best Hospitals 2013-14 Honor Roll. The primary affiliate of Case Western Reserve University School of Medicine, UH Case Medical Center is home to some of the most prestigious clinical and research centers of excellence in the nation and the world, including cancer, pediatrics, women's health, orthopaedics and spine, radiology and radiation oncology, neurosurgery and neuroscience, cardiology and cardiovascular surgery, organ transplantation and human genetics. Its main campus includes the internationally celebrated UH Rainbow Babies & Children's Hospital, ranked among the top children’s hospitals in the nation; UH MacDonald Women's Hospital, Ohio's only hospital for women; and UH Seidman Cancer Center, part of the NCI-designated Case Comprehensive Cancer Center at Case Western Reserve University. UH Case Medical Center is the 2012 recipient of the American Hospital Association – McKesson Quest for Quality Prize for its leadership and innovation in quality improvement and safety. For more information, go to www.uhhospitals.org