Help Your Kids Have a Heart-Healthy Halloween 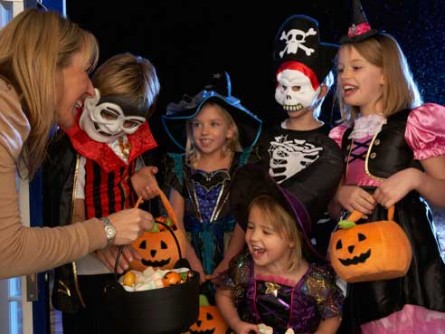 Newswise — So, has that bag of Halloween-themed candy “minis” purchased in early October made it this far yet? If so, while you’re showing great willpower, you may want to think twice before dispersing it to the ghouls and goblins who show up on your doorstep Halloween night.

“Obesity is a serious epidemic, and we have to wake up and realize this is a problem,” says Donna Arnett, Ph.D., chair of the Department of Epidemiology in the UAB School of Public Health.

Nearly 17 percent of children in the United States ages 2-19 are obese, and 31 percent are overweight or obese, according to the American Heart Association. Arnett, who is president-elect of the AHA, says holidays in which candy plays a big part in the celebration do not help obesity rates.

“Though Halloween alone is not going to be a major overall contributor to our children’s health, any behaviors they learn can have an effect,” adds Arnett.

Based on the nutrition facts for popular candies handed out this time of year, Arnett estimates the average child collects between 3,500 and 7,000 calories Halloween night. A 100-pound child who consumed 7,000 calories would have to walk for nearly 44 hours or play full-court basketball for 14.5 hours to burn those calories, Arnett says.

Instead of handing out calorie-laden treats, Arnett suggests giving out non-candy items, like plastic bat rings or spooky stickers.

“I have also seen people give out quarters in lieu of candy — and that is another great alternative if you can do it because kids love money,” Arnett says.

Other ideas that are more beneficial to a child’s health are to get together in your neighborhood or community and host a large event – instead of trick-or-treating. Arnett suggests costume contests and other social aspects that will make it fun, but not as unhealthy as collecting a sack full of sugary stuff.

If trick-or-treating is a must, turn it into an exercise game with fun gadgetry. Walking is an aerobic exercise that benefits the heart. By having kids wear a pedometer, Arnett says you can make a contest out of who takes the most steps.

“I think with how much kids love using technology and a good sense of competition, counting steps could get them some heart-healthy exercise as well as fun,” says Arnett.

Once that candy comes home parents need to hold on to it and ration it to the kids, she says.

About UABKnown for its innovative and interdisciplinary approach to education at both the graduate and undergraduate levels, the University of Alabama at Birmingham is the state of Alabama’s largest employer and an internationally renowned research university and academic health center; its professional schools and specialty patient-care programs are consistently ranked among the nation’s top 50. Find more information at www.uab.edu and www.uabmedicine.org.