HHMI Awards $1.4 Million Each to 15 Hanna Gray Fellows to Support Diversity in Science 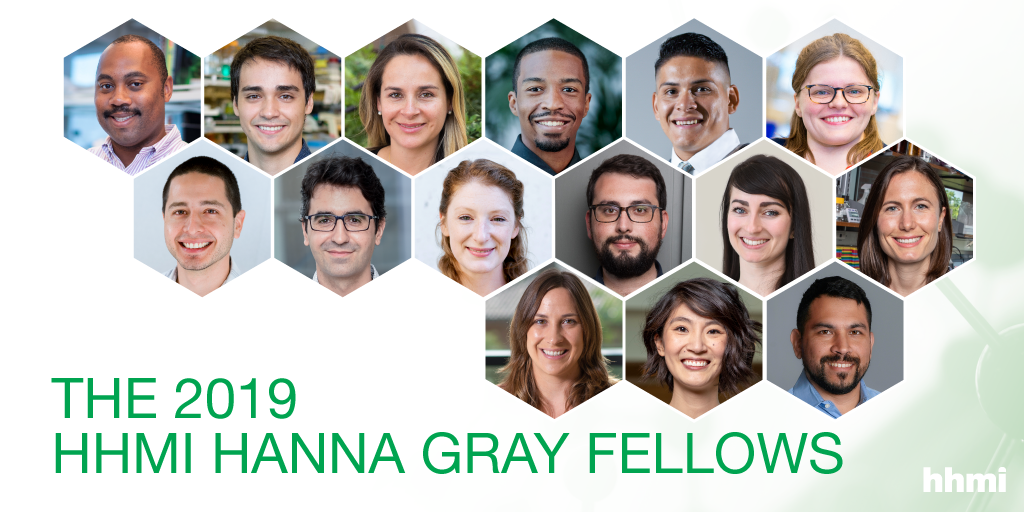 These questions represent a slice of the diverse and compelling science studied by the 15 new Hanna Gray Fellows announced today by the Howard Hughes Medical Institute (HHMI). The Institute will invest up to $25 million for their support over eight years. The fellows, all outstanding scientists early in their careers, will have the freedom to follow their curiosity and pursue challenging scientific questions at the forefront of their fields.

The group includes a physician-scientist trying to pin down factors that drive psychiatric illness, a plant biologist untangling the complex interactions between microbes and crops, and a neuroscientist investigating how information flows through vast networks of nerve cells.

“HHMI is committed to supporting people who will solve some of the greatest problems in science,” says Erin O’Shea, the president of HHMI. “To do this, we need people from all backgrounds – the best solutions will be found by a diverse set of people.”

The Hanna Gray Fellows come from gender, racial, ethnic, and other groups underrepresented in the life sciences. These scientists are poised to make significant contributions to science in the years to come, O’Shea says, and are all original thinkers with diverse perspectives. HHMI will support these young scientists at a critical time in their academic careers – when they transition from postdocs to principal investigators and begin to set up labs of their own.

“Being a Hanna Gray fellow is an extraordinary opportunity for me,” says Elsy Buitrago-Delgado, who studies early mammalian development. “I came to the US from Colombia to become a leader in developmental biology. I want to inspire the next generation of Latin American scientists.”

The Hanna H. Gray Fellows Program is named for Hanna Holborn Gray, former chair of the HHMI trustees and former president of the University of Chicago. Under Gray’s leadership, HHMI developed initiatives that foster diversity in science education. HHMI continues to carry forward this work on college and university campuses across the US.

A competition for the next group of Hanna Gray Fellows opens immediately. In 2020, the Institute will again select up to 15 fellows. This grant competition is open to all eligible applicants, and no nomination is required.

The Hanna H. Gray Fellows Program represents HHMI’s commitment to supporting talented early career scientists who have the potential to become leaders in academic research. This program will ultimately invest up to $100 million in up to 60 young scientists. By selecting individuals from groups underrepresented in the life sciences, HHMI seeks to increase diversity among academic faculty.Fellows’ successful careers will inspire future generations of scientists from America’s diverse talent pool.

The Hanna Gray Fellows will:

In keeping with HHMI’s long-standing approach to support “people, not projects,” fellows have the freedom to change their research focus and follow their curiosity for the duration of the award. The competition is open to researchers and physician-scientists dedicated to basic research in all the biomedical and life science disciplines.

The program provides opportunities for career development, including mentoring and networking with others in the HHMI scientific community.Fellows will also attend an HHMI Science meeting each year. This year’s 15 fellows join 30 Hanna Gray Fellows selected in 2018 and 2017, during the program’s first two years.

In this program, fellows will receive funding for their postdoc training and may continue to receive funding during their early career years as independent faculty. In total, fellows may receive up to $1.4 million each and be supported for up to eight years.

Applicants may obtain more information and eligibility requirements at www.hhmi.org/programs/hanna-h-gray-fellows-program. The deadline for applications is January 8, 2020. The selection of fellows will be made by the end of June 2020, and grants can start as early as September 15, 2020.

The Howard Hughes Medical Institute plays an important role in advancing scientific research and education in the United States. Its scientists, located across the country and around the world, have made important discoveries that advance both human health and our fundamental understanding of biology. The Institute also aims to transform science education into a creative, interdisciplinary endeavor that reflects the excitement of real research. HHMI’s headquarters are located in Chevy Chase, Maryland, just outside Washington, DC.