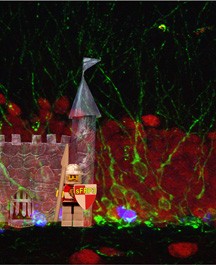 -- Discovery shows how therapies activate stem cells in the brain

Newswise — Through a series of investigations in mice and humans, Johns Hopkins researchers have identified a protein that appears to be the target of both antidepressant drugs and electroconvulsive therapy. Results of their experiments explain how these therapies likely work to relieve depression by stimulating stem cells in the brain to grow and mature. In addition, the researchers say, these experiments raise the possibility of predicting individual people’s response to depression therapy, and fine-tuning treatment accordingly. Reports on separate aspects of the research were published in December on the Molecular Psychiatry website, and will also appear in the Feb. 7 issue of Cell Stem Cell.

“Previous studies have shown that antidepressants and electroconvulsive therapy both activate neural stem cells in the adult brain to divide and form new neurons,” says Hongjun Song, Ph.D., a professor of neurology and director of the Stem Cell Program at the Johns Hopkins University School of Medicine’s Institute for Cell Engineering. “What were missing were the specific molecules linking antidepressant treatment and stem cell activation.”

To make that link, Song’s team and its collaborators assembled a body of evidence from different types of experiments. In one, they compared gene activity in the brains of mice that had and had not been treated with electroconvulsive therapy, looking specifically at genes with protein products that are known to regulate neural stem cells. The comparison turned up differences in the activity of one inhibitor gene for a chemical chain reaction that had been previously implicated in stimulating neural stem cells. Specifically, the therapy reduced the amount of protein the inhibitor gene, sFRP3, produced, which would in turn have given the growth-stimulating chain reaction freer rein.

In order to tie their mouse work to what happens in the human brain, the researchers next analyzed genetic information from 541 depression patients and tracked their response to a course of antidepressant drugs. The team found three common variations in the human version of sFRP3 that were linked to a better response to therapy. Wondering what these variations actually did, the researchers searched a database that correlates gene sequences to gene activity in the human brain. All three variations caused less gene activity, they found, meaning that there likely would have been less inhibitor.

Song notes that sFRP3 is also regulated by other conditions, including exercise. “This gene’s activity is very sensitive to the amount of activity in the brain, so sFRP3 seems to be a gatekeeper that links activity to new neuron growth,” he says. The finding has two major near-term implications, he says: It could lead to genetic tests that enable doctors to predict a patient’s response to antidepressants, and it provides a target for potential new therapies for the disease.